The firm that has managed the Pompano Beach Community Redevelopment Agency (CRA) since 2009 announced that it has terminated its contract with the city, effective Feb. 1.

Redevelopment Management Associates (RMA) – a Pompano-based firm that specializes in revitalizing core areas of cities, counties and special districts around the country – said it is stepping down as manager of the Pompano Beach CRA due to the “hostile environment” that has been pervading the CRA board meetings over the past few months.

“The tenor of those meetings is just not a healthy environment,” said Kim Briesemeister, who along with Chris Brown, is a co-director of RMA. “The dynamics are not conducive to good development for the city.”

The CRA, under RMA’s management, was instrumental in the transformation of Pompano’s beachfront area, including the development of the Pompano Beach Fishing Village, which has attracted new restaurants, retail and a Hilton hotel. The CRA has also created a cultural hub in the downtown area, with the Pompano Beach Cultural Center, Bailey Contemporary Arts (BaCA) and the Historic Ali Cultural Arts. The CRA has also been planning the development of an Innovation District, which will be part of a new downtown.

Briesemeister said that despite the fact that RMA has managed the CRA in “an extremely transparent and responsible manner,” there has been a series of CRA board meetings where certain commissioners and a small group of residents from the northwest community have repeatedly made erroneous and inflammatory comments to the contrary.

One of the points of contention brought up at CRA board meetings was the purchase in 2015 of two buildings by Briesemeister and Brown in the CRA’s redevelopment areas. The entire second floor of the building at 2300 E. Atlantic Boulevard, in the CRA’s east district, serves as RMA’s headquarters, and the second building, in Old Town of the CRA’s northwest district, is where RMA hopes to expand its offices in the future.

“We obtained an ethics opinion six months prior to purchasing the buildings that clearly stated there was no conflict of interest or ethics issues with ownership of the properties,” said Briesemeister. “In addition, written notification was provided to the city manager as required. We invested in our own city because we are also residents of Pompano, and we wanted to live and work nearby.”

Commissioner Michael Sobel sent an email to the city manager at 7am on Dec. 8, 2017, requesting an emergency CRA board meeting to terminate RMA’s contract at 6pm that same day, but he did not verify that the purchases were ethical, said Briesemeister. He was concerned the directors might be choosing projects that served their personal interests. Commissioner Beverly Perkins, who represents the city’s northwest section, agreed.

The meeting was held on Dec. 12, but the effort to dismiss RMA failed, with a 4-2 vote against it. The city attorney who oversees the CRA verified and confirmed that there was no conflict of interest, and that the purchases were ethical and legal, said Briesemeister.

At a CRA board meeting two months prior, Sobel made a motion to terminate RMA’s contract ($1.2 million annually), saying the city’s development would continue organically without RMA and that the city could manage the CRA for less money. Commissioners Sobel and Perkins voted in favor of the motion, while the rest of the City Commission, which serves as the CRA Board of Directors, voted against it.

“RMA has had a great record of achievement in the city – on the beach, along Atlantic Boulevard, downtown and on Martin Luther King Jr. Boulevard,” said Jack Rogerson, who has served on the East CRA Advisory Committee since 2007. “I don’t understand why anyone would want to replace them.”

Rogerson said that “clearly the system isn’t working when the majority of the Commission voted twice to retain RMA, and yet they still had to resign to protect the reputation of their company.”

“I’m concerned that the climate at recent commission and CRA board meetings, which are seen by the public, will make potential developers and businesses think twice before investing in Pompano, and that could have long-term repercussions for the city’s future growth and prosperity,” he said.

A complaint voiced at CRA board meetings by some residents of the city’s northwest community, which has struggled with blight, is that they don’t think the CRA is doing enough for them, or the things that they want, said Briesemeister.

“The CRA is not the panacea and the only entity that can solve all of the ills of the northwest community,” she said. “Many of the things residents request are valid, but they are not things that CRA funds can be used for, such as building a senior citizens center, dealing with code problems or trash removal.”

In 2014, Pompano Beach and the CRA filed a lawsuit against the county, which has yet to be resolved. The CRA, which was established by the city in 1989, uses tax dollars and wants to continue its redevelopment efforts through 2040, but is scheduled to ‘sunset’ in 2019. The lawsuit asserts that when the CRA was formed, Broward County gave Pompano Beach the authority to renew the CRA for another 30 years beyond 2019.

Last week, city officials rejected the county’s offer to settle the lawsuit for $21 million in redevelopment funding. If the city were to prevail in court, the county portion of the CRA’s funding would exceed $180 million.

Whether the lawsuit is settled in or out of court, it will significantly reduce the amount of revenue made available to the CRA by the county. As a result, RMA had been in discussions with the city for many months about transitioning their contract to reflect this reduction in revenue.

Now that RMA has terminated its contract, they will work with the city during a 90-day transition period, putting in place the appropriate organizational structure for continued growth. RMA has stated that, after the transition phase, they are willing to offer continued technical support as needed.

“We will be more than happy to offer our consulting services to the city, but we are stepping away from the management role,” said Briesemeister.

RMA has two goals, she said: to keep the CRA’s tremendous economic momentum going and to ensure that RMA’s reputation in the industry remains well-respected and protected.

“We are not politicians. We are business people, and we’re here to help cities. If we’re going to be used for political purposes in a way that damages us, then we’ll remove ourselves from the situation,” said Briesemeister. 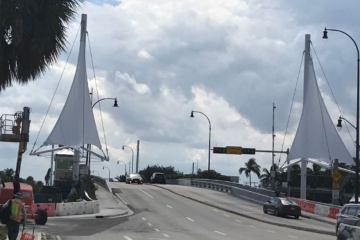