Project History! is a collaborative project between the Deerfield Beach Historical Society, historian and author Sally J. Ling and Deerfield Beach High School. A series of articles will be published this year exploring the city’s history. In honor of Black History Month, February’s edition tells the tales of two of Deerfield Beach’s oldest churches. 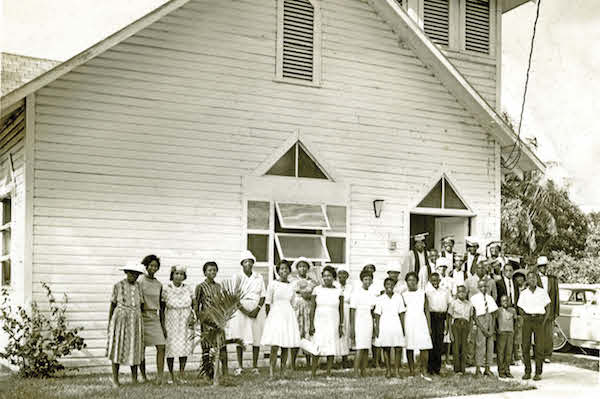 As Henry Flagler’s Florida East Coast Railroad pushed south toward Miami in 1896, African-Americans, many from Miami and the Bahamas, and white folks from states farther north moved into the primitive South Florida area that is now Deerfield Beach. By 1902, about forty blacks and five white families began clearing land to plant pineapples and winter vegetables in what would eventually become a thriving agricultural community.

To fulfill the need for Christian worship services within the black community, two Methodist leaders, Reverend Lawrence and Mrs. Knight, brought the community together and held services in a bush arbor built from palmetto fronds. The congregants, a mix of six Methodists and ten Baptists, stayed together for about two months until the Baptists formed their own church, First Zion Missionary Baptist Church, the earliest church to be established in Deerfield.

Their first Sunday School was held in a vacant railroad section house, one of several clapboard houses that at the time paralleled the railroad tracks. After two Sundays, they moved to a one-room house offered by Gus Bell. In April 1903, the congregants built a palmetto shack in front of the same site as the present day church. Thirteen residents initially joined the church by letter of transfer or profession of faith. Reverend A.J. Thomas of Lemon City, Florida, near Miami, served as the church’s pastor for the first two years. In 1905, Reverend L.J. Ely became the pastor. During his two year tenure, the church moved to its present location and built a 12’ x 24’ wooden structure to accommodate the growing congregation.

As members joined, the church was enlarged and an organ added. Plans for a parsonage were on the drawing board when the then pastor Reverend B.F. Goodwin died while purchasing lumber for the structure. Over the ensuing years, several pastors served the church and the congregation continued to grow. The church was again enlarged, pews installed, and a piano added. A baptismal pool replaced baptism by immersion in either the Hillsboro Canal or Atlantic Ocean.

“We went to Sunday school, 11 o’clock service, any special programs at 3 o’clock, and returned at six for the evening service. We also went to youth programs mid-week,” she said.

One of her fondest memories was the pot luck dinner they had about every six weeks.

“It was an old fashioned dinner. The men would come in overalls and the women in long dresses and bonnets. We had a chance to eat some of everyone’s cooking,” said Belva.

By 1952, the congregation had grown sufficiently enough to be able to afford colorful stained glass windows which modernized the church. In 1958, the church acquired four adjacent lots that allowed it to once again expand. In the ensuing decades, the church continued to thrive under the leadership of a number of different pastors. 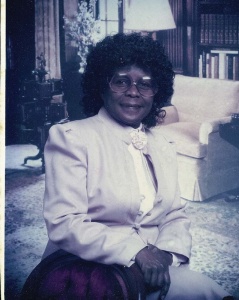 Leola Brooks, 91, doesn’t remember a time when she wasn’t attending Deerfield Beach Church of God. Born in Deerfield in 1926, she was christened in the church and remains its oldest member.

Growing up one of nine children on the east side of the railroad tracks, she remembers walking to the Pentecostal church and participating in every service it had, not that it was an option.

“My parents were rather strict and made us go. I occasionally played sick when it was time for Sunday School,” she said.

Looking back on her time in the church, she remembered it as a wonderful experience. Aside from making friends, it gave her an outlet for her “dramatic side” when she performed in Christmas plays or gave stirring speeches. She also loved memorizing scripture, singing songs like “Jesus Loves Me,” and participating in Easter egg hunts —traditions that continue to this day.

The church got its start in August of 1924 when God inspired Bishop Joseph Eleazer Johnson, originally from the Bahamas, to travel from his home in Goulds, Florida, near Miami, to preach to the black community in Deerfield Beach. Described as a “thin, frosty white haired, sharp-featured man full of the Holy Ghost,” he began his ministry in the city by evangelizing door-to-door. Without a building in which to conduct services, he and Reverend Nathaniel Edgecombe of Fort Lauderdale chose the corner of Southwest Second Street and Dixie Highway as their pulpit. As Edgecombe preached a forceful Full Gospel message, a crowd gathered. By the end of the preaching, fifteen persons had been “’slain’ by the outpouring of the Holy Spirit.”

Deacon Wiley, owner of a barber shop across the railroad tracks from the “street meeting,” offered his store in which to hold services. By November 1924, nine founding members established the first Church of God in Deerfield Beach. Within a year, growth of the congregation increased to 20 and the church moved out of the barber shop and into a tent on Old Dixie Highway where it continued to grow. In the meantime, the congregation purchased land on Robinson Road on which to construct its first sanctuary which was dedicated in 1926. Two years later, powerful winds from the 1928 hurricane destroyed the entire building. Undaunted, the congregation constructed a new building, debt free, on the same site. It included a kindergarten.

Gwendolyn McDonald remembered the influence Dora West Gibson, one of the church’s founding members known as “Mama Dora,” had on her as a young girl. Known as a “prayer warrior,” Mama Dora would gather the children in her home at noon for prayer.

“The anointed oil was put on our foreheads and prayer would begin. As children, we felt that we would never get out of her house — we were anxious to go back outside to play and prayer time interfered with playing. Now, many years later, we are now adults and the beneficiaries of that ‘inconvenient prayer time,’” wrote McDonald as a reflection for the church’s commemorative booklet celebrating its 90th birthday in 2014.

In 1937, the congregation built a new church at 365 South Dixie Highway (where the church is today). Members began construction on a parsonage in 1959 and incorporated as the “Church of God Colored Work of Deerfield Beach, Florida.” By 1973, the church needed more space to accommodate their growing membership, and a new Sunday school and educational building were added. It expanded again in 1985 when they opened a new sanctuary and enlarged the parking lot.

When the church updated their articles of incorporation in 1991, the congregation changed the name of the church to Cathedral Church of God. A milestone occurred in 2010 when, for the first time, women were allowed to serve on the Pastor’s Council. Sisters Mary Fulmore and La’Netta Henry became the first women to serve on this council.

Today, Bishop Patrick L. Kelly, who has been with the church for eight years, pastors approximately 250 members.

Information for this article was obtained from interviews with respective church members as well as church histories from the archives of the Deerfield Beach Historical Society. These include: “History of the First Zion Missionary Baptist Church of Deerfield Beach” and “Linking to the Past…,” a 2014 commemorative booklet from Cathedral Church of God celebrating its 90th year.