In a move that stunned many, the company responsible for overseeing the redevelopment of Pompano’s Beachfront, Old Town, The Martin Luther King Jr. Boulevard corridor, and more, has resigned after months of bickering with city leaders. The departure of RMA, LLC leaves the future of those projects in question and is the latest in a long history of ups and downs for the programs of the city’s Community Redevelopment Agency (CRA). While significant development has occurred over the past few years, that wasn’t always the case.

In the late 1990s, Delray Beach in Palm Beach County underwent a major revitalization that turned its downtown area into one of the most charming, fun and prosperous commercial and creative districts in South Florida. Since then, small and mid-sized cities throughout the tri-county region have dreamed of becoming “the next Delray.” Many cities established CRAs and developed master plans, but no one was able to recreate the Delray magic.

For a long time, Pompano Beach was one of those cities. Two CRA districts, one focusing on the blighted northwest part of town, the other serving rundown East Atlantic Blvd., from just west of Federal Highway to the ocean, were created in 1989 and 2001, respectively. Tax money was set aside, bold plans were thrashed about, but as years went by, there was no visible substantial improvement. If anything, the city was more rundown.

Then in 2009, the City Commission decided enough was enough and looked to bring in an outside firm to lead the CRA process. The search led them to Kim Briesemeister and Chris Brown of RMA who, among other experiences, had played a role in the Delray Beach build-up and Fort Lauderdale’s Flagler Village. Briesemeister and Brown quickly went to work developing plans to revitalize both Pompano CRA communities.

Many people were skeptical (me included). What was so special about RMA? Why should we, Pompano Beach residents and business owners, trust these folks? What were they going to do what many before them had promised but couldn’t deliver? We were about to find out.

A quick personal aside: As an East CRA resident and a Pompano Beach small business owner myself, I’ve had plenty of opportunity to interact with RMA directly and also observe their work. One of my work projects has been creating the colorful, illustrated Chamber of Commerce maps that highlight activities and businesses in Pompano Beach. I’ve talked to over a hundred area business owners over the last half-dozen years or so. When I first started, I couldn’t believe the negative aura that swept over the Pompano Beach business community. Revenues were going down, neighbors were closing their doors and almost no one believed it was going to get better. (Full disclosure: the CRA has been a low-level advertiser in several of the annual maps).

Enter RMA and their first major project: renovating the Harbor Village Shopping Center on East Atlantic Blvd. It seemed like it should be a simple task…but it was far from that. CRAs look to get owners to reinvest their own money in their properties while offering matching funds to help the initial investment blossom. Sounds like a no-brainer way to enhance a rundown strip mall. Except, the Harbor Village property was owned by nine different people — all with different levels of interest and resources. Getting those owners to work together was like herding cats. That’s one of the reasons the strip had become so shabby. Nonetheless, the RMA folks pushed and pushed until they were able to get everyone on board and willing to invest in remaking the property. The results were remarkable. The once half-vacant shopping center started to attract new tenants and multiple pre-existing business owners have told me their revenues were better than ever.

The CRA embarked on dozens more projects to entice new businesses and improve quality of life in Pompano Beach, including the renovation and expansion of the walkways, streets and dune system along Pompano Beach Blvd. bordering the beach and ocean, the building of the multi-story parking garage on A1A, the development of the Pompano Beach Fishing Village (which will include restaurants, shops and a new Hilton hotel when completed), the creation of Bailey Contemporary Arts (BaCA) and Historic Ali Cultural Arts, the planning and design of the Pompano Beach Cultural Center and the creation of a plethora of events that have become part of the fabric of the city.

Enthusiasm in Pompano Beach’s future became contagious. Major non-CRA developments have included the opening of the Marriott Pompano Beach Resort and Spa and other hotels, the construction of the upscale Sabbia Beach condos and the Koi Residences and Marina, the formation of the Shipwreck Park diving reef and the addition of dozens of new restaurants, breweries, retailers and industrial businesses. The Pompano Beach Amphitheater went from dormant to vibrant. The city parks department hired legendary golfer Greg Norman to redesign the public golf course.

That’s what a CRA is supposed to do. Make smart, strategic use of the public funds set aside for redevelopment, partner with businesses within the CRA districts to maximize opportunities and, then if all goes well, spur additional growth outside of the CRA zones to create a revitalized city.

That’s all happening in Pompano Beach. Back around 2000, when everyone wanted to be Delray Beach and cities started their own CRAs, a flurry of activity ensued. A handful of cities even developed a few strong CRA-related projects. But, I think it is fair to say, no other city in Broward County has had the comprehensive overhaul that Pompano Beach has.

It hasn’t always been easy

Sure, there have been bumps along the way. Not every idea was a success. There have been complaints from some that the CRA doesn’t communicate well enough with individual stakeholders and that they don’t always pay enough attention to the concerns of these individuals, especially if they don’t match up with the CRA master plan. Those criticisms probably have some validity. They are also probably largely unavoidable due to the scope of the rebuilding of Pompano Beach. Residents east of Federal Highway are worried about increased traffic, congestion and noise. Community leaders in northwest Pompano fear that the needs of longtime residents won’t be fully attended to as new development takes place. Both sets of concerns are legitimate, complicated and need to be addressed. Based on everything RMA had delivered thus far, there is no reason to believe that they are not the best people to resolve those problems.

That leads us to the current state of affairs. In the past six months, there have been two votes by the city commission to remove RMA as the managers of Pompano Beach’s CRA. Both votes failed 4-2. But the situation has taken a nastier turn.

Some city and civic officials have become highly critical of RMA. One of their primary points of contention is that Briesemeister and Brown bought two properties within the CRA areas they are paid to oversee development of, and, according to some, did not properly disclose this information. Breisemeister, other city officials and RMA’s legal counsel dispute this and have offered proof to the contrary. Another concern had been that this purchase could be viewed as a conflict of interest. Critics worry that Briesemeister and Brown might be profiting from the CRA’s success (beyond the $1.2 million management fee they are paid annually). But you can also make the case that they are putting their money where their mouths are. Yes, it’s not unreasonable to question whether or not RMA could have been more broadly transparent about their purchases. Sure, there is a potential conflict of interest in these purchases, but it is the city’s job to make sure this doesn’t happen. Ultimately, isn’t it a benefit to the city that RMA is eager to invest in Pompano Beach and to deepen their commitment to the CRA’s success?

Last month, RMA announced their firm was going to terminate their contract with the city, effective at the end of April. Through a press release, Briesemeister and Brown stated that the move was “their only option due to the hostile environment that has been pervading the CRA meetings over the past few months.”

RMA, along with the mayor, city commission and city manager’s office, has done an outstanding job in revitalizing Pompano Beach. But the work is far from done. All the progress can quickly go backwards. If RMA is to exit, the city commission needs to quickly put together a solid plan to continue these efforts. As so many other cities have shown, this is not an easy task. I am hoping the city and RMA can patch things up and work together to continue this remarkable journey in building a city we can all be proud of. 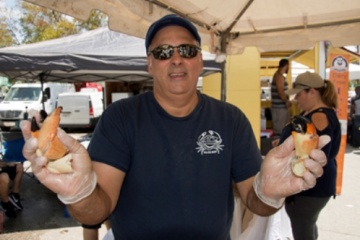