The campus of the Pompano Beach Municipal Charter School will be in Old Pompano.

The City of Pompano Beach is purchasing six properties in Old Pompano from Christ Church United Methodist, Inc. for use as the future Pompano Beach Municipal Charter School, which is expected to open for the 2024-2025 school year.

The Pompano Beach Municipal Charter School will be part of the Broward County public school system, but independently operated, with members of the City Commission serving as the governing board, rather than the School Board. The charter school will serve grades K through 8.

The City Commission, at a special meeting held via Zoom on June 1, approved a contract for $7,612,500 to buy the Christ Church Pompano Beach Campus, which is located directly west of Founders Park.

“Staff has been working for over two years to identify the appropriate location available for this new municipal charter school,” Cassandra LeMasurier, the city’s real property manager, told the City Commission.

The location was selected for the charter school due to its large land area, central location in the city and proximity to City Hall and the city’s cultural and historic venues, said LeMasurier.

The City obtained two independent appraisals ranging in value from $7.25 million to $7.85 million. The church also obtained an appraisal valuing the property at $8.1 million.

In addition to the Christ Church chapel, the campus includes three other churches that lease buildings on the premises – St. Martin’s Episcopal Church, Harbour Church and Pompano Calvary.

The leases will terminate upon the City’s closing on the purchase contract, which will be towards the end of September, said LeMasurier. St. Martin’s lease was already set to expire in October. The other leases are on a month-to-month basis.

“We’re allowing for up to 120 days for closing, which is a month longer than we normally would,” said LeMasurier.

The City might be able to offer Harbour Church a lease option, but only for a limited period of time, because the City will need to do “extensive improvements” to the property to be able to get the charter school up and running, said LeMasurier.

Christ Church had been contemplating selling the property because it was operating at over $100,000 a year in deficit, according to LeMasurier. The City’s offer to buy wasn’t the only offer the church had received. Several developers offered to purchase the property for the purpose of leveling it to the ground to build something new.

The church held a Zoom town hall meeting with the congregation on April 18 to discuss the City’s offer to purchase the property, then followed up with a vote on May 2. Sixty-nine percent of the congregation who voted were in favor of it. The Florida United Methodist Church Conference also gave its approval.

LeMasurier said the church liked the idea of the property continuing to serve the residents, but in a different capacity.

Commissioner Tom McMahon of District 3, where the church property is located, noted that Christ Church was founded in Pompano Beach in 1899. He said the property is an “ideal location” for the charter school.

“I think we have some challenges with traffic,” said McMahon. “Staff has assured me that will be looked at and addressed.”

Mayor Rex Hardin said he’s happy the church property “will be used for a purpose that will still be for the public good, not simply a developer’s profit.”

“This is a great step forward for our charter school,” said Hardin.

The City Commission had approved the contract to purchase the Christ Church properties at its regular meeting on May 25 in a 4:2 vote, with Vice Mayor Beverly Perkins and Commissioner Cyndy Floyd casting ‘no’ votes.

During discussion of the purchase contract, two members of the public who called in expressed concern that the resolution title did not accurately describe the boundaries of the six properties being purchased. They also voiced concern about the extra traffic the charter school will generate in the surrounding neighborhood. In addition, the callers said that not enough residents were aware of the City’s plans to purchase the properties and there should be more public input.

Perkins agreed with both callers, and said the purchase contract should have been discussed at a City Commission meeting held in the Commission chambers so people could walk up to the podium and “give their opinion on it.”

“Something’s wrong with the picture when you have over 100,000 people in the City of Pompano and two people call in,” said Perkins. “That’s really not, I think, being fair to the public in giving them their opportunity to speak on such a big, big project like this.”

Floyd made a motion to hold the resolution approving the purchase contract until the next meeting in order to verify the accuracy of the resolution title and reassure residents. The motion failed, with Floyd and Perkins casting the only votes in favor of it.

Towards the end of the meeting, City Attorney Mark Berman advised that, upon taking another look at the item during the meeting recess, the wording of the resolution title needed to be changed to better describe the location of the properties being purchased, so it wouldn’t be considered “misleading or inaccurate.”

The Commission’s earlier vote to approve the resolution was rescinded, and it was decided to bring the item back to the Commission at the special meeting on June 1. At the meeting, Perkins cast the only vote against the purchase contract.

When Perkins inquired if residents surrounding the church had been notified of the City’s plans to put a charter school there, City Manager Greg Harrison said they weren’t notified because “we’re not to that point yet.”

Hardin explained that there was no requirement to notify residents because “this is simply a sale agreement.” He added that the church itself notified all of its parishioners, and many of the parishioners live in the surrounding neighborhood, so “they were well aware of what was taking place” and endorsed the sale of the property to the City.

Perkins said a community meeting needed to be held at some point so residents will know what to expect, especially in terms of traffic. McMahon agreed.

“We’re going to have lots of discussions like that,” said Hardin.

The City Commission, at the May 25 meeting, also approved a resolution indicating the City’s intent to issue tax-exempt Certificates of Participation financing for the municipal charter school that will allow for the reimbursement of the land acquisition cost as well as for the development of the charter school.

“This money is coming from our reserves right now,” said Hardin, “but we fully expect to get this money back from the state.”

According to the resolution, the maximum principal amount of the certificates expected to be issued to finance the project is $30,000,000.

In its first year of operation, the Pompano Beach Municipal Charter School will have grades K, 1, 2 and 6, and up to 380 students. Additional grade levels will be added progressively: grades 3 and 7 in the second year; grades 4 and 8 in the third year; and grade 5 in the fourth year. With grades K through 8 in place, the maximum estimated enrollment capacity would be 910 students.

There will be no cost for students to attend the school, and enrollment priority will be given to students who are residents of Pompano Beach.

Like all other public schools in the school district, the Pompano Beach Municipal Charter School would receive its primary funding from the Florida Education Finance Program, which provides operating funds based on the number of full-time students enrolled.

The goal is for the school to achieve an “A” rating, which is the highest grade awarded by the state of Florida school ranking system.

The new charter school will seek accreditation, and once it receives its first rating from the state’s ranking system, it will apply to become a Cambridge International School, which follows a high-performance curriculum. 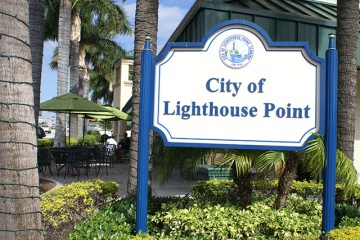