The City of Pompano Beach’s electric utility boxes are being transformed into colorful works of art thanks to the Utility Wrap Project organized by the city’s Public Art Committee. One artist chosen to complete two of the city’s electric boxes in phase two of the project has a story of transformation just as remarkable as the boxes he’s creating.

The drab steel electric boxes on street corners with traffic lights can serve as both eyesores and blank canvasses for graffiti artists, vandalism and marketing posters. In Pompano Beach, however, many of those once ugly boxes have been transformed into colorful works of art. The city’s Public Art Committee is responsible for the Utility Wrap Project. The committee has completed the first phase of the project, which included 46 electric boxes. Phase two is now underway, which includes 43 boxes and is projected to be completed in the next 12 to 18 months.

In the first round of the Utility Wrap Project, the Public Art Committee issued a call to artists seeking themed work that would reflect the location of each box. In the second round, the artists were encouraged to submit work of any kind.

“We found that the themes limited us a little bit,” said Laura Atria, Pompano Beach’s Public Art Program Manager. “So the second round was far more open.”

Of the 30 artists selected for the 43 boxes in phase two, 17 are from Florida. One of those artists, a Miami-based, self-taught painter, sculptor and illustrator, has an inspiring story of transformation.

Jonathan Aizenstat is an artist and children’s book illustrator who has overcome extreme obstacles to pursue his passion. As a child, Jonathan was diagnosed with Tuberous Sclerosis Complex (TSC), a genetic disorder that causes tumors to form in many different organs including the skin, brain and kidneys. These irregularities can cause extreme developmental problems and learning disabilities similar to autism, as well as skin and facial abnormalities.

As a result of TSC, Jonathan was brutally bullied as a child and had difficulty with the most basic of tasks. His mother Beatrice gets teary-eyed as she recounts the days Jonathan came home from school soaking wet, without his bike, having been thrown in the canal by other kids; or the mornings when Jonathan would come down for breakfast with his clothes on backwards. Teaching Jonathan to tie his shoes as a kid was a major accomplishment. Growing up, Adrian, Jonathan’s younger brother by two years was Jonathan’s protector and best friend.

Throughout adolescence and into adulthood, Jonathan struggled with bouts of debilitating depression. As the years passed, the thought of Jonathan living an independent lifestyle, at times, seemed impossible. But about three years ago, when Jonathan reached his early 30s, he honed in on a passion for art and illustration. With a clear focus, his life transformed. In essence Jonathan found his true north — a compass with which to guide his energy and time.

“It’s something that has driven me to be stronger,” Jonathan said.

Jonathan’s mother Beatrice is a professional artist herself having trained under renowned artists all over the world. The walls and surfaces of the Aizenstat home are covered in stunning paintings, photography and sculptures. Beatrice’s garage is also home to her extensive collection of dolls and accessories. Jonathan’s father too is a creative — a professional architect who once owned a children’s toy store in Bolivia. Jonathan grew up with these two creative minds. He also fondly remembers watching animated films and television — Nickelodeon and Pixar. These ingredients seem to have coalesced into Jonathan’s vivid, playful imagination, which he now channels into his art and illustrations. Now Jonathan’s room, too, is filled with art supplies — sculptures, a drafting table, paints, markers and colored pencils.

Jonathan had dabbled in art as a kid. Beatrice would occasionally take him to the ceramics studio with her or sit him down with art supplies; but it wasn’t until his early 30s that Jonathan decided to seriously pursue art and illustration. Once he did, the ripple effect was profound. Tasks that once seemed impossible — such as learning to drive —  suddenly became less daunting. Before, when Jonathan had attempted to learn to drive, his mind couldn’t comprehend the consecutive nature of numbers or the order of street signs. He would easily get lost. The frustration of learning would deter him, but when backed by a drive to become a better artist, the frustration became more bearable. Jonathan learned to drive in order to transport himself to the ceramics studio. Art also has expanded his ability to understand spatial relationships and dimension, which is reflected in the progression of his work.

Jonathan’s first major published project is a children’s book called “No Time for Pizza.” The book is a collection of playful, cartoon-like drawings with a signature (and semi-alter-ego) character named Don Yoni. That book was recently inaugurated into circulation into the Miami-Dade Public Library system and acknowledged by Florida State Governor Rick Scott.

Since then, Jonathan’s tackled three-dimensional projects. He was commissioned to paint a two-walled mural at JAWS podiatry in Hollywood with an underwater, shark theme. Recently, Jonathan created the “Pizza Lamborghini.” His Watercolor paintings were used to create a digital vinyl wrap for a 2017 Lamborghini Huracán for theRide2Revive Charity Track Event at the Miami-Homestead Speedway. The event provides kids with life-threatening illnesses a memorable, adrenaline-filled driving experience. The car was commissioned by Prestige Imports & Lamborghini and was designed as an immersive experience for the kids. Children were able to add vinyl pizza toppings to the car before it circled the track.

“For me it is about enjoying what I do,” said Jonathan. “In the Lamborghini I cried six or seven times. It’s emotion that you can’t contain…I can always get paid, but touching people to their core is what it’s about. ”

Jonathan seems to have developed a knack for working with children, helping them to tap into their own creativity. At the Northeast Dade – Aventura Branch Library, Jonathan led a children’s art workshop to teach kids how to create their own animated Don Yoni characters. Jonathan has also been commissioned to create work for the sensory playroom at Victory Center’s new state-of-the art building which opened in March. The Victory Center is a non-profit that serves children with developmental disabilities in South Florida.

Most recently, Jonathan was chosen to transform two of Pompano Beach’s utility boxes. Adrian accompanied Jonathan to Pompano Beach to explore, where Jonathan had the idea to create colorful, outdoor, animated scenes such as surfers, dog-walkers and smiling birds. The ten paintings Jonathan created to submit to Pompano Beach’s Art Committee show a major advancement in his work — from “No Time for Pizza’s” more one-dimensional characters, to more intricate expressions and depth.

“I think technique you can learn, but what I don’t have is this huge imagination that this kid has developed,” said Beatrice. “His world is with different colors. Drawing is not directed in your hand, it’s directed in your mind and what you see.”

Adrian, the once protective brother, now helps Jonathan with the business and marketing aspects of being a professional artist. Jonathan finding art, in many ways, has transformed the entire family.

“It’s emotional for sure,” Adrian said. “But Jonathan’s work is good. It stands on its feet. Sometimes he’ll come into my room in the middle of the night at 2 or 3 in the morning and I’ll just know he has something good. Those are the moments for me.”

“What I want to point out is the miracle,” Beatrice added, “the miracle of transformation when you are recognized…when somebody tells you that you are good for something. There is gold in every human being. We had been working and working and working with him, but it was art brought him to this point. It’s totally amazing what art can do.” 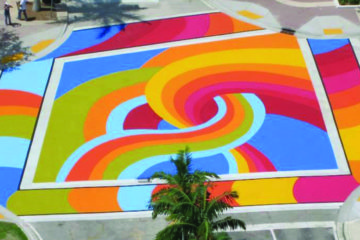