Marches in Washington D.C. and simultaneous events across the nation will honor the sea and help spread awareness about issues affecting the ocean’s fragile ecosystem. In the same spirit, we highlight some local, ocean-oriented events happening this summer. Plus, we feature two stories about local people doing cool things in the ocean — first, Victoria Burgess, a Lighthouse Point native and Pompano Beach fire inspector who will attempt to set a world record this June by paddleboarding from Cuba to Key West to raise money for the Women’s Sports Foundation (READ THAT STORY HERE); and second, Alex Schulze and Andrew Cooper, two local young men who founded 4Ocean, a non-profit helping to rid the ocean of trash by turning it into bracelets. Proceeds from the bracelets fund ocean cleanup projects across South Florida and around the world. (READ THAT STORY BELOW).

4Ocean Clears Pounds of Pollution One Bracelet at a Time

In early 2017, Boca Raton residents Alex Schulze and Andrew Cooper launched 4Ocean, a business dedicated to ridding our oceans of pollution, one pound at a time.

The story of 4Ocean started on a surf-trip to Bali, Indonesia where founders Alex and Andrew visited an old fishing village. Everyday they observed the fishermen push their boats out to sea through piles of garbage that washed up on shore. The demand for seafood drove fishermen to catch fish unsustainably in an area wrecked by pollution.

Alex ran fishing charters from the time he was a teen in Marco Island. Andrew, a 100-ton sea boat captain from Orlando Florida, also spent much of his life on the water. The surfers communicated to people in the village that from the looks of the waste washing up, soon there would be no fish left, and that the nets they used were perfect tools to clear the area of trash. An Indonesian fishermen responded, “We don’t get paid to collect plastic, we get paid to catch fish.”

Alex and Andrew knew that in order to move forward, they would have to create a business model that funded ocean clean-up efforts, and they created 4Ocean.

When you buy a bracelet from 4Ocean, you pull one pound of trash from the sea. Bracelets are $20, and are handmade in Bali using post-consumer recycled materials like glass and plastic bottles.

4Ocean uses a percentage of its proceeds to hire captains and clean-up crews, employing over 150 people world wide. They remove harmful waste from South Florida shores all the way to the Bali coastlines, seven days a week.

“Plastic is not the enemy, it’s where it ends up,” co-owner Andrew Cooper said, speaking on sea pollution. “Every time it rains, it’s like pressing the reset button because so much trash flows in from inland.”

According to the National Ocean Service, 80 percent of pollution to the marine environment comes from land. Most of the garbage in our seas are single-use items. Some examples include plastic bags, packaging, bottle caps and fishing line.

Non-profit organization Miami Waterkeeper states that about 8 million tons of plastic enters the ocean each year. Floating garbage patches are created when floating debris on the surface of the sea is accumulated by ocean currents named gyres. The world’s largest garbage patch floats halfway between Hawaii and California and spans 600,000 square miles.

The primary locations for 4Ocean clean-up efforts are currently on the East Coast of Florida from West Palm Beach to the shores of Miami. Once the pollution is removed from the sea, it is transported back to 4Ocean’s 8,000-square-foot cleaning facility where it is sorted and brought to a recycling center or waste facility.

4Ocean also releases limited edition bracelets to raise money for research in addition to their original pledge to pull a pound of waste from our waters with each bracelet sold. In 2018, the business released bracelets dedicated to coral reefs, earth day and whales with 10 percent of net profits donated to varied organizations.

4Ocean provides consumers with a unique opportunity to purchase an item that has a direct positive impact on our environment. As of May 11, 2018, 4Ocean had pulled 629,942 pounds of harmful waste from our oceans and coastlines.

If you would like more information on volunteering, please visit the calendar of events on the 4Ocean Facebook page:
facebook.com/4OceanBracelets/

EVENTS TO HONOR YOUR OCEAN

On June 16 Dixie Divers will host the 2018 Deerfield Beach Pier Cleanup and Guinness Book of World Records attempt for longest underwater human chain. For one day a year the City of Deerfield Beach closes the pier to fishing and opens it for underwater scuba divers to facilitate a reef cleanup. The pier has some of the most active and abundant marine life in all of Deerfield Beach. This once-a-year event is a stellar opportunity for divers to explore the usually forbidden area.

Divers will be able to dive around and under the pier from 9am until 11am. Volunteers are also needed on land to help pull out buckets of trash. The City of Deerfield Beach will keep records of the trash’s weight and composition. Dixie Divers will videotape the cleanup and create a DVD that will be used for environmental education programs.

In addition to the cleanup, Dixie Divers is attempting to break the Guinness Book of World Records for longest underwater human chain. Divers will join hands underwater. Last year 241 divers participated, breaking the previous world record of 182 divers, which had been set in Thailand in 1976. Dixie Divers goal this year is 400 divers.

Details: Registration and equipment unloading will begin at 7:30am. Unload in front of the pier. Park for free at the parking lot on the side of the Deerfield Beach fire station. Ninety spots are available on a first come, first served basis. Divers must have a C card or certification number and sign a liability release before entering the water. Dives from the beach will take place between 9am and 11am.

Please bring cutting tools and a small rake to help with cleanup. On land, volunteers can help from shore or atop the pier. A free event t-shirt and goodie bag will be provided to volunteers who pre-register online at racersignup.com/world-record-attempt-longest-human-chain-underwater/volunteer. The record attempt will take place at 11:30am. Please contact Dixie Divers at 954-420-0009 for more information.

Help protect the Florida Coast from an invasive species while having a great time fishing during the Florida Lionfish Challenge. Starting on Lionfish Removal and Awareness Day (May 19), and continuing until Sept. 3, participants can win up to $5,000 by catching and harvesting at least 25 lionfish tails and emailing pictures to lionfish@MyFWC.com. Lionfish must be easy to count and include name, date of harvest and signature. Participants are to submit lionfish tails for proper disposal (after first 25) to checkpoints located statewide at select dive shops and regional offices. Participants are to remove tails, place in plastic bags, label the bags with harvester name, phone number and date of harvest and deliver to the checkpoints. Participants should complete the 2018 Lionfish Challenge Submission form online at myfwc.com/fishing/saltwater/recreational/lionfish/challenge/ and submit by email to lionfish@MyFWC.com. Check online for more details. Participants can also visit reefrangers.com for an interactive map of Lionfish hot spots.

March for The Ocean

Friday June 8 marks World Oceans Day. Over that weekend there will be marches in Washington DC and simultaneous events across the nation to spread awareness of issues affecting the environmental health of the ocean and its fragile ecosystem. The Surfrider Foundation of Broward County and Free Our Seas and Beyond will host a local March For The Ocean Celebration at Charnow Park on Hollywood Beach from 9am to 1pm.

The intention of the event is to create an atmosphere of positive community activism and celebrate the ocean with music, art and environmental non- profit organizations. The free event will feature positive reggae vibes from DJ Lance-O of Kulcha Shok Muzik and an art contest for the best ocean-themed costumes, posters and beach clean up buckets.

Free Our Seas and Beyond, a non-profit that uses plastic pollution pulled from local beaches to create art, will be displaying marine debris art. A marching band will also lead participants on a walk starting at 10am north to the Marine Environmental Education Center (MEEC) where paraders can enjoy an icee, refill water bottles, visit Captain the sea turtle and cool off under a sprinkler before heading back to Charnow Park.

Get your claws on some lobsters, listen to live music and learn tips and tricks for lobster hunting at this year’s annual BugFest by the Sea, a lobster-hunting dive festival in Lauderdale by the Sea. The Bug Fest is sponsored by Reef Safe, an eco-friendly, reef-safe alternative to traditional sunblock.

Participants in the lobster hunting competition — The Great Florida Bug Hunt — can catch up to twelve lobsters a day. The Hunt will take place on July 25 and 26. Divers are allowed to dive anywhere off shore and should sign up in advance online at lbtsevents.com/bugfest-by-the-sea. The entry fee is $20 which includes a tee-shirt, BugFest goody bag and access to all seminars and events. Participants will bring caught lobsters to a weigh-in point at either the Sands Harbor Resort & Marina (125 N. Riverside Dr, Pompano Beach) or El Prado Park (4500 El Mar Dr., Lauderdale by the Sea). For every lobster caught, participants will receive a ticket for a raffle, which will take place at the Mini-Season Awards Party and Chef Contest on Thursday, July 26 from 6 to 8pm at the Anglin’s Square Beach Pavillion (12 Commercial Blvd, Lauderdale by the Sea). Winners of the raffle will receive a wide-range of prizes. The chef contest will feature teams of two to three chefs each. Each team will have one hour, a grill and four lobster tails to cook up a delicious meal. Judges will compare each dish and some lucky audience members will get to taste. Past winners have included lobster pizza, lobster grits and lobster sliders. The awards party will also feature the Scuba Cowboy and ScubaRadio mermaids.

A free lobster hunting seminar taught by author and lobster hunting expert Jim “Chiefy” Mathie will also take place the night before the competition starts at 6pm on Tuesday, July 24 at Plunge Beach Hotel (4660 El Mar Dr, Lauderdale by the Sea). A kick-off party will follow the seminar at 7pm. The kick-off party is free to attend and the first 100 guests will get a ticket for a free beer.

A free concert will be held the Saturday after the competition on July 28 from 6:30 to 10:30pm at Anglin’s Square (12 Commercial Blvd, Lauderdale by the Sea), featuring The Weedline and other bands. The concert will host a raffle to benefit Diveheart, a non-profit which provides confidence building diving lessons for veterans and differently-abled children.

For more information on any of the BugFest events, visit lbtsevents.com/bugfest-by-the-sea. 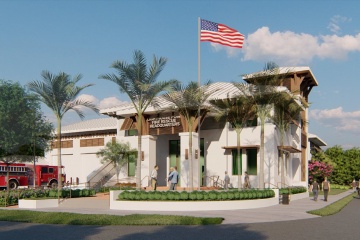