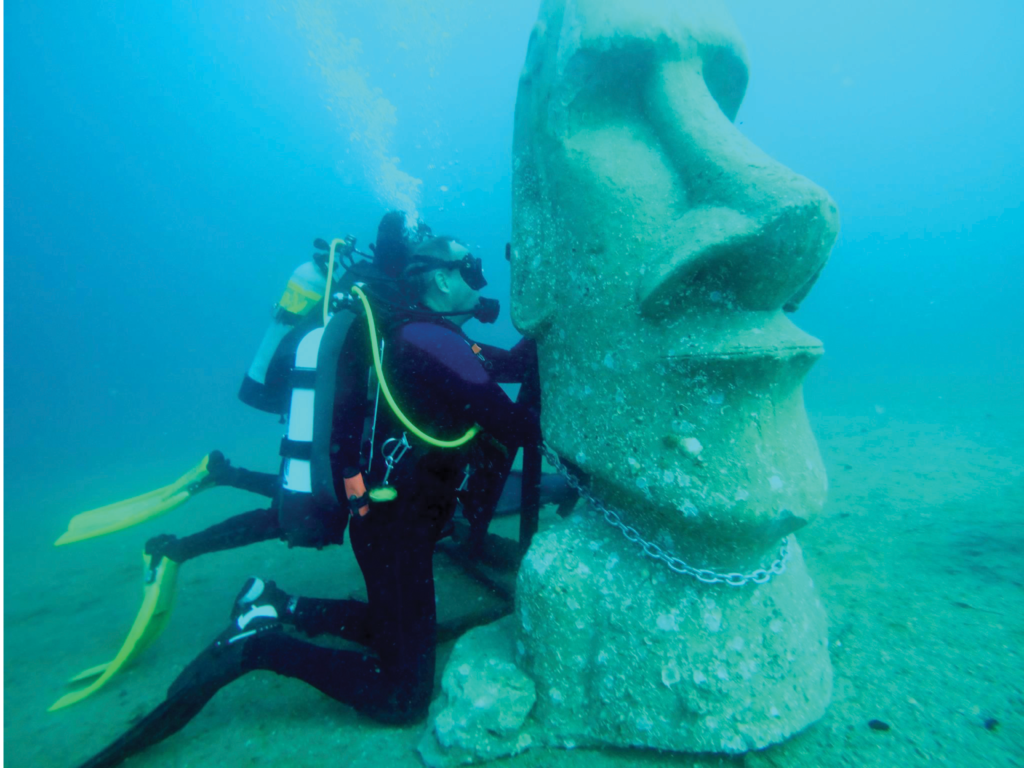 After a devastating mistake sent Deerfield Beach’s first underwater art exhibit and artificial reef tumbling upside down and crashing onto the sea floor, Rapa Nui organizers mourned. Now, the “Mojectic Moai” may make a comeback. Project benefactor Margaret Blume and Rapa Nui artist Dennis MacDonald have been working with a team of community members, including Arilton Pavan of Dixie Divers and the Broward County Environmental Protection and Growth Management Department, to resurrect the once-celebrated exhibit.

The cheers turned to anguish in a matter of minutes on that festive Sunday, June 7, 2015. The sinking of the Rapa Nui artificial reef, composed of 15 Moai on a 150-by-45-foot barge, flipped upside down, crushing $500,000 worth of concrete figures. This was to be the area’s first underwater, public art diving destination. One spectator gasped as the barge sunk. “The whole thing is going down … upside down,” they said in shock.

The project’s primary benefactor, Margaret Blume, described it as “devastating.” Rapa Nui Artist Dennis MacDonald was left speechless, and organizer Arilton Pavan, owner of Dixie Divers, was left to explain how it all happened.

The proposed sinking had captivated the community in the months preceding the sinking. The project was organized through the Deerfield Beach Woman’s Club, who became “ambassadors” for the project and raised money for the public art. There were festivities held at Two Georges at the Cove Restaurant, giving the community the opportunity to see, up close, the “Majestic Moai” of the Rapa Nui Reef. Additional money was raised for public art by the Chamber of Commerce on the Saturday night before the sinking.

This “ripple effect” of community involvement was exactly what Blume had been seeking when she invested in the Rapa Nui artificial reef project. Adding substance to the community is why philanthropists like Blume donate time and money, but they also hope to inspire additional investments to compound and sustain their initial venture. For Blume, Rapa Nui was a way to showcase her two passions: public art and helping the environment. She wanted to make a big splash, and the 15 Moai seemed a fantastic and interesting way to do it — a one-of-a kind public art initiative. But when the Rapa Nui reef devastatingly flipped upside down and sunk, it took Blume and the community’s sense of pride and accomplishment with it. Gradually, as with any death, things returned to normal.

MacDonald recovered fine. He was commissioned to create another underwater art exhibit in Pompano Beach — an aquatic gambling scene built aboard Lady Luck, a retired New York sludge boat Pompano Beach purchased with Isle Casino to sink as an artificial reef. It was Dennis’ inspiring work on Rapa Nui Reef that paved the way for his involvement with Lady Luck, which now serves as the crowned jewel and centerpiece of Pompano Beach’s Shipwreck Park.

When Lady Luck was sunk July 23 with MacDonald’s art aboard, MacDonald admits he was nervous. Even with a “slow sinking” method engineered to limit any mishaps, he watched anxiously as Lady Luck tilted just before it breached the ocean surface.

It took a few months for Arilton Pavan of Deerfield Beach-based Dixie Divers to reorganize and assess the devastation of Rapa Nui reef. Not one to take “no” for an answer, he was motivated to reclaim the site. Pavan came to America from Brazil with his wife Sonia 27 years ago with $300 in his pocket; he knows the meaning of hard work, success and more importantly, failure. The recovery work on Rapa Nui has been slow, but progress has been made. With Pavan leading a group of volunteer divers on Saturday afternoons, three of the Moai have been pulled from under the barge. Using a combination of debris removal by hand, an underwater come-a-long and lift bags, the Moai have been relocated, one-by-one, on top of the upside-down barge. Using brackets, the Moai have been up-righted.

Having Pavan spend his time and energy to improve the site has given Blume hope and validated the importance of the Rapa Nui project. It’s “still very painful” to even think about what happened last year, but Blume is encouraged that the project can live again.

In addition to Pavan, Dr. Ken Banks and his team at the Broward County Environmental Protection and Growth Management Department have been working to resurrect Rapa Nui. The team added 250 tons of limestone boulders to the site last year. Named “Mount Deerfield,” the cost of these boulders was covered by a grant from the Florida Wildlife Commission to create a great habitat for marine life.

Blume said she has discussed adding more Moai to the barge with MacDonald. It’s now a matter of logistics to place them, one-at-a-time, on the site. MacDonald still has the molds from when he created the original project, so making additional Moai is just a matter of concrete and rebar. The challenging part is getting them safely to the ocean floor in 65-feet of water.

Considering the site was nothing but sand just a little over a year ago, Deerfield Beach is proud to have Rapa Nui in the works. Located about 1,500 feet directly east of the Deerfield Beach International Fishing pier, it lies between the second and third reef. This reef track is the largest in the continental United States and third largest in the world. Extending from west of the Dry Tortugas in the Gulf of Mexico, the 400 linear miles of reef extends as far north as the St. Lucia Inlet in Martin County.

Presently, the Rapa Nui Reef is filled with a large amount of sea life. A goliath grouper has taken up residence under the barge and a colony of tiny spiny lobster are calling “Mount Deerfield” home. There are even a few loggerhead turtles competing for space with a variety of snapper, grunts and tarpon. There is no doubt the sinking of Rapa Nui has at least created a new habitat. This will pay tremendous dividends in the future for the marine environment.

And the site is in a prime location, easily accessible by boat, situated between the Boca Raton and Hillsboro Inlet. Because it’s lying in 65 feet of water, it’s a dive that any open water certified diver can visit. With the top of the barge and “Mount Deerfield” in 50 feet of water, skilled free divers can also enjoy the plunge.

Yet Banks says it still needs something more. By the end of summer, Banks hopes there will be additional limestone boulders added to the site. Still, it is presently merely an upside down, rusted work barge with a pile of cement debris and pieces of rebar underneath. While the placement of the three Moai erected on top of the barge has made it look a little better, it’s still not the “Majestic Moai.” So in addition to adding a few more Moai, MacDonald and Blume recognize the need to re-create the art component. This is the missing ingredient now.

“We don’t want to leave it the way it is now,” said Blume. The project needs “composition and connectivity.”

MacDonald and Blume plan to keep pushing until the vision is complete.

“Even though our hearts were broken, we never gave up,” said Blume. “We’re not quitters, so we’re hopeful the project will have new life.”

Life’s a Beach is a one-stop location for almost every beach-front activity. They offer jet ski, stand-up paddleboard and kayak rentals, as well as snorkeling and fishing charters. A full service beach with plenty of footballs, frisbees and volleyball nets on-site means you can spend all day on the beach.

Specializing in deep sea fishing, including sailfish, mahi, kingfish, wahoo, swordfish, marlin and bottom fishing, the Hillsboro Inlet Fishing Center is a hub for fishermen of all kinds. The Fishing Center offers a huge selection of fishing boats for rent and has been in business for decades. You can bet on finding highly experienced fishermen and women to help you with all your fishing needs.

If you and your friends want a more private and intimate diving experience than a dive shop group dive, then head out with Captain Brett and Seefish Charters. Their diving boat will accommodate between two and six divers. Captain Brett grew up in Deerfield Beach and has lived in the county for 48 years. He has been a commercial fisherman for decades and his girlfriend and Seefish co-operator Kirsten Gash has been in the dive business for 16 years. These hyper-locals know the insider secrets to the Broward County dive and snorkel scene. Their boat leaves from Pioneer Park, winding it’s way out Hillsboro Inlet. From there, guests can customize their trip however they want. Whether your group wants to stick to shipwrecks, reefs, shallow or deep dives, Captain Brett will cater to your needs and experience level. And if you catch a lobster, he’ll gladly help you “hook n’ cook” it.
Seefish Charters
561-303-4612
seefishcharters@yahoo.com
divedeerfield.com

Looking for your aquatic sports fix? Ski Rixen is one of America’s first cable water ski resorts. With its own private patch of water, you can water ski, wake board, kneeboard and a whole lot more. Ski Rixen features a boatless system where you are pulled along by a series of automated cables. This unique experience is definitely something that adrenaline junkies and water sport dilettantes need to check out.
Ski Rixen
401 S. Powerline Road, Deerfield Beach
954-429-0215
Open Monday – Sunday from 10am – 8pm 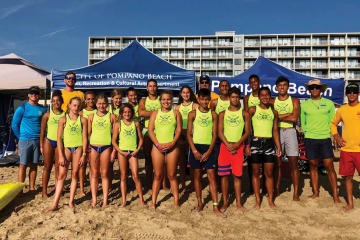