At its meeting this past Tuesday night, the City Commission approved, in a 4:2 vote, a developer’s request to rezone land located at 1508 N. Ocean Blvd. in order to build a 205-foot-high “twin towers” project, which many residents in the surrounding neighborhood strongly oppose. The maximum height allowable before the zoning change was 105 feet.

The site of the proposed project, known as Ocean Park Beach Residences, is located on a 0.62-acre parcel of land at the southeast corner of the NE 16th Street and A1A intersection, just next to North Ocean Park.

The developer, Mount Vernon Property Holdings, is planning to construct two towers of condominiums with a total of 28 units (a single unit per floor), and 1,500 to 3,500 square feet of ground-floor commercial space, which will possibly include a café.  Prices for these one unit per floor condos are likely to be among the most expensive ever built in Pompano Beach.

The towers are 19 stories high, approximately 50 feet taller than their closest multi-family neighbor, Tiffany Gardens to the north, which stands at 145 feet, but was built before the 105-foot height restriction was established.

At Tuesday night’s meeting, the majority of residents who spoke during a public comment period that lasted over an hour-and-a-half told the Commission they opposed the project and the rezoning of the property. They expressed concern about the height of the buildings, insufficient parking, potential traffic issues, incompatibility with the proposed site, and putting too much on such a small parcel.

Residents had previously staged a rally over the weekend to protest the project.  Read all about that, here.

Proponents of the project said it is “forward-looking,” low in density, will create jobs, increase the tax base, and is the “highest and best use” for the site.

The Commissioners said they had received numerous e-mails, letters, and phone calls from residents both for and against the project.

The developer is proposing to carry out $300,000 of improvements to North Ocean Park, but some residents are concerned that the oceanfront park will be made to look like a private plaza for the two towers and their residents, rather than a public city park that is designated as one of the resources along the Broward County A1A Scenic Highway.

Mayor Rex Hardin assured residents that “it’s a City of Pompano Beach park and will remain a city park.”

Hardin refuted insinuations made by a resident that the votes of certain commissioners were influenced by campaign contributions they received from parties involved in the development of the project.

“Everyone who’s up here, we’re voting what we feel is best for the City of Pompano Beach,” said Hardin. “Any suggestion that that dictates someone’s vote is plainly wrong.”

Hardin, who voted against the rezoning, said: “It’s a beautiful project but not in that spot. It’s just not compatible with that park being right behind it. I think it’s just too large. It’s not really even just the small lot size; it’s more where it’s at.”

Commissioner Beverly Perkins, who also voted against the project, said she was “listening to the residents.”

“I would be very passionate about what’s going to be built next to me or across the street,” she said. “So, I do understand.”

The City Commission approved the proposed rezoning in a 4:2 vote on first reading at its July 9 meeting, with Hardin and Perkins casting the ‘no’ votes.

The ordinance approved by the Commission will rezone the project site from RM-45 multi-family residential to a Planned Development Infill (PD-I) district. PD-I zoning is intended to provide flexibility to enable mixed-use development on relatively small sites within the city’s already developed areas.

In December 2017, the developer’s application to rezone the property was unanimously denied by the Planning and Zoning Board in a 6:0 vote. At that time, the project consisted of two 248-foot-high towers with a total of 35 residential units. The mixed-use being proposed was 768 square feet of unmanned kiosks and a 400-square-foot Broward Sheriff’s Office substation on the ground floor, which are no longer part of the project.

One of the main reasons for the Planning and Zoning Board’s denial was that the project did not meet the mixed-use requirements for a PD-I zoning district.

Because there was no requirement that the developer’s rezoning application had to go back to the Planning and Zoning Board, the developer chose to bring the revised version directly to the City Commission for consideration.

It was explained by a City consultant that a project has to go back to the Planning and Zoning Board only if the scope of the project has been increased, and in this case, there was a reduction in density and height.

Among the four commissioners who voted in favor or the project at last night’s meeting was Commissioner Rhonda Eaton, who sat on the Planning and Zoning Board when the original project was denied.

“Change is difficult sometimes,” said Eaton. “I also ask when I consider these things: If not this, then what… a monolithic block?

Commissioner Andrea McGee of District 1, where the project is being proposed, also cast a ‘yes’ vote. McGee said she thought the project that was submitted by the developer in 2017 was too high and too big, but she supports the new smaller plan.

One resident who gave sworn testimony at Tuesday night’s meeting that approximately 1,600 residents from throughout the city had signed a petition opposing the rezoning said: “The voices of the community fell on deaf ears. The sky is now the limit even in low-height residential areas in Pompano Beach.”

At Tuesday’s meeting, the Commission also approved a development agreement that identifies the specific improvements to North Ocean Park being offered by the developer, which include a new pavilion, restrooms, exterior showers, seating, landscaping, picnic tables, BBQ grills and fitness and exercise equipment.

The developer will present a park improvement site plan to the city’s Parks and Recreation Advisory Board, and all improvements that occur at North Ocean Park must have City approval. Changes to the park must also comply with all guidelines consistent with the park’s AIA Scenic Highway designation. 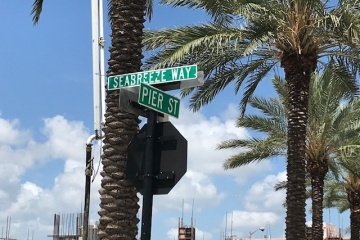