POMPANO BEACH “TWIN TOWERS” PROTESTED: A group of Pompano Beach residents staged a protest on Sunday July 21 against the rezoning of a parcel of land located at 1508 N. Ocean Blvd, which is on the corner of NE 16th Street and A1A, just next to North Ocean Park.

The developer of the 0.62-acre property hopes to build two towers of condominiums, each at 205 feet in height, which exceeds the current maximum zoning height of 105 feet.

The Pompano Beach City Commission approved the proposed rezoning in a 4:2 vote on first reading at its July 9 meeting. The item is scheduled to go before the City Commission tonight, July 23, for a second and final vote.

“This is an effort to get out in front of people and raise awareness, and get them to the Commission meeting,” said Jeanie Schermesser, one of the organizers of the protest. “We felt if we did a protest it would make a difference in the vote. We wanted to do as much as we could.”

Schermesser is a founding member of the Pompano North Beach Alliance (PNBA), which was formed last year with the main objective of protecting the parcel of land from being rezoned.

“I can’t recall a time when there’s been a development that has caused this much contention among residents who are so upset about it, they came out to spend their Sunday afternoon in the blazing heat protesting,” said a resident who attended the event held at the development site.

The developer, Mount Vernon Property Holdings, is requesting that the site be rezoned from RM-45 multi-family residential to a Planned Development Infill (PD-I) district. PD-I zoning is intended to provide flexibility to enable mixed-use development (a combination of residential and commercial units) on relatively small sites within the city’s already developed areas.

In December 2017, the developer’s application to rezone the property was denied by the Planning and Zoning Board in a 6:0 vote. At that time, the project consisted of two 248-foot-high towers with a total of 35 residential units. The mixed-use being proposed was 768 square feet of unmanned kiosks and a 400-square-foot Broward Sheriff’s Office substation on the ground floor.

One of the main reasons for the Planning and Zoning Board’s denial was that the project did not meet the mixed-use requirements for a PD-I zoning district.

At the July 9 City Commission meeting, a consultant to the city’s Development Services Department said the development, known as Ocean Park Beach Residences, had been “slightly modified.” The height of the towers was decreased by 42 feet, the number of residential units was reduced to 28 (with a single unit per floor), and the ground-floor commercial space (now 1,500 to 3,500 square feet), no longer includes kiosks and a police substation, but possibly a café.

The two towers are 19 stories high, approximately 50 feet taller than their closest multi-family neighbor, Tiffany Gardens to the north, which stands at 145 feet, but was built before the 105-foot height restriction was established.

The developer is proposing to carry out $300,000 of improvements to North Ocean Park, but some residents are concerned that the oceanfront park will be made to look like a private plaza for the two towers and their residents, rather than a public city park that is designated as one of the resources along the Broward County A1A Scenic Highway.

The developer chose to bypass getting input from the city’s Parks and Recreation Advisory Board before the developer’s agreement for the park improvements is presented to the City Commission at the second reading of the rezoning ordinance.

Because there is no requirement that the developer’s rezoning application must go back to the Planning and Zoning Board, the developer chose to bring the revised version directly to the City Commission for consideration.

“We’re supportive of growth and development in Pompano,” said a resident, “but this isn’t the usual order of how rezonings get passed, with having a unanimous denial by Planning and Zoning, and then going straight to the City Commission.”

During a public comment period that lasted almost an hour-and-a-half, approximately 30 residents told the Commission they opposed the project and the rezoning of the property, while about a dozen residents said they were in favor of it. City officials also received numerous e-mails, letters, and phone calls from residents both for and against the project.

Residents against the proposed development said they are concerned about the height of the buildings, insufficient parking, potential traffic issues, incompatibility with the proposed site, and putting too much on a parcel the size of a “postage stamp.”

Mayor Rex Hardin, who voted against the project, said it was a “beautiful, iconic building,” but it was in the wrong location. “This piece of property backs up to a park,” he said. “I do not believe it is compatible with that park…that’s my biggest issue. I can’t support it for that reason.”

Commissioner Beverly Perkins, who also voted against the project, said it was “a great project,” but she has “an ear of listening to the people,” and “the majority of the residents are saying ‘no.’”

Among the four commissioners who voted in favor or the project was Commissioner Andrea McGee of District 1, where the project is being proposed. McGee said she was supporting the project “with a look towards the future.” Commissioner Rhonda Eaton sat on the Planning and Zoning Board when the original project was unanimously denied.

The land use attorney representing the developer stated that “substantial” modifications had been made to the original proposal, and presented 51 letters of support to the City Clerk.

Resident Jeanie Schermesser presented a petition opposing the rezoning that would allow the Pompano Beach “Twin Towers” to be built  with signatures from over 1,300 residents in all five of the city’s commission districts.

“It’s not over after the vote,” said Schermesser of the upcoming second reading at the July 23 City Commission meeting. “We’re not going to give up.” 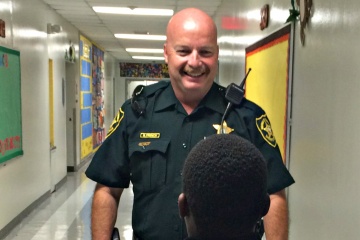