The 8.49-acre development site – located on the east side of Federal Highway, north of NE 14th Street Causeway, and south of NE 17th Street – is under the same ownership as Aquamarina Hidden Harbour, which currently includes a boatyard and dry boat storage building.

The site plan for the project shows a ground-floor restaurant and bar with indoor and outdoor seating and a view down the Caliban Canal. There is also a 568-space parking garage, and a marine retail space and showroom. The dry boat storage building will remain, but the wet slips will not.

Pedestrian paths are planned along the waterway on NE 23rd Avenue and NE 16th Street. A small lot on the north side of NE 16th Street is slated to become a private park that will be open to the public.

The DRC went over the site plan with members of the project development team, including Graham Penn, the land use and zoning attorney who represents the developer.

The site plan needs to be revised to address a number of issues raised by the DRC, and will be brought back to the committee for a second review.

Among the DRC’s key concerns was the need to restrict vehicles with hazardous or combustible materials, such as fuel delivery trucks for the marina, from driving underneath a pedestrian bridge that is proposed to be over NE 23rd Avenue, just south of NE 16th Street. The bridge would connect the two residential buildings on the project site at the third floor.

Penn explained that the overall plan was designed so that a fuel truck can go to and from the marina without going under the pedestrian bridge.

Penn also agreed to put a sign on the buildings indicating the 17-foot clearance height of the pedestrian bridge, even though a sign is not a requisite if the clearance height is over the required national standard of 16.5 feet.

Other concerns pertained to infrastructure, landscaping, protecting water views and strengthening security. Plans show two parking garage access points along NE 23rd Avenue, but there can only be one. Service areas for garbage collection will need to be reconfigured to enable trucks to turn around or continue through without having to back up onto roadways.

In addition to a site plan application, the developer has submitted an application to rezone the project site to a Planned Development Infill district, which is intended to provide flexibility to enable mixed-use development on relatively small sites within the city’s already developed areas.

If the Planning and Zoning Board gives a favorable recommendation, the rezoning application will likely move on to the City Commission in September, according to the city’s Development Services Department.

An application for an Air Park Overlay Permit must go concurrently with the site plan application to the Planning and Zoning Board.

The project will require Federal Aviation Administration (FAA) approval in order to verify that the proposed structures won’t interfere with any of the approach surfaces to the runway at the nearby Pompano Beach Air Park.

At City Commission meetings and community meetings, a number of residents who live in the vicinity of the project have voiced their concerns about increased traffic and overcrowding. They are worried that with the number of residential units that are planned, NE 23rd Avenue, which is used to access 14th Street Causeway and Federal Highway, will not be as viable. They are also concerned that their quality of life and property values will decrease.

Last December, the City Commission unanimously approved a land use plan amendment that was requested by the developer. The land use designation of the property was changed from “Commercial, Medium-High and Low-Medium Residential” to “Mixed-Use Residential High.” Under the property’s old designation, only 88 residential units were allowed. 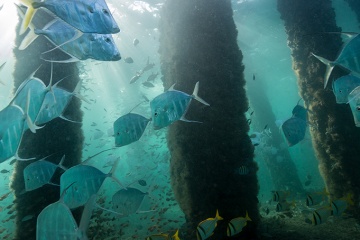