MCNAB PARK PLANS: The Pompano Beach Community Redevelopment Agency (CRA) has unveiled a new design concept for the transformation of McNab Park, located at 2250 E. Atlantic Blvd, which will be the new site of the historic McNab House when it is moved there in January 2020.

The McNab House, currently located at 1736 E. Atlantic Boulevard, will be converted into a restaurant. The house’s two-story detached garage will also be relocated to the park and repurposed.

According to the proposed site plan, the two-story house would be placed at the northeast corner of the park fronting Atlantic Boulevard, and the garage would be placed to the west of the house. The northwest area of the project site, where the Chamber of Commerce building currently sits, would become the oval lawn and gardens.

The Chamber of Commerce is presently looking at options to move to another location.  Their current building would be torn down. The north and south shuffle board courts will also be removed. The plan is to relocate the basketball court to the existing handball court area, and to upgrade the playground and move it to a more central location within the park. The tennis court currently in the park will remain where it is.

Alfredo Sanchez, an architect with Bermello Ajamil & Partners, the firm hired by the CRA to create a master plan for McNab Park, presented the preliminary design to a joint meeting of the East CRA Advisory Committee and the Parks and Recreation Advisory Board on Oct. 10.

“It’s a work in progress that we’re presenting to you today to get your input and your comments and your ideas,” Sanchez told the committee, board and residents in attendance.

Sanchez said the design was meant to achieve certain goals, including preserving the historic heritage of the city, activating McNab Park as a neighborhood and citywide recreational asset, and creating “eyes on the park,” which has a history of vagrancy issues.

The oval lawn is intended to be an open space used for weddings, throwing a Frisbee, sitting on the grass, or where kids can run and play, said Sanchez. The garage could be used as a coffee bar, eating area or some other use tied to the restaurant.

The existing civic building, which is currently used for community meetings and activities, will be removed, which was a concern to residents, but Sanchez said the new pavilion will have space that can be used both for dining and meetings.

When asked about what will happen to the veterans’ memorial that dates to the park’s 1952 dedication ceremony, Sanchez said it will be relocated to a dignified, more prominent place in the park.

Some residents and committee members expressed concern that there wasn’t a sufficient amount of parking in the new design to accommodate both parkgoers and patrons of the restaurant, which will have between 160 and 200 seats.

The design shows the parking area has been relocated from the middle of the park to the lower eastern edge of the park, with an entrance and exit along SE 23rd Avenue, and a drop-off for valet parking.

Sanchez said the number of parking spaces will increase from 29 to 38. There are also about 20 on-street parking spaces on the edges of the park, and about 100 parking spaces in the surrounding streets. By code, one parking space per every four restaurant seats is required.

Because of interest expressed by some residents to have shuffle board courts and possibly a pickle ball court or a second tennis court at the park, Sanchez said the design team will look at how they might be incorporated into the McNab Park plans. The section of the park to the south, where the existing sports facilities are located, has not been redesigned yet.

“We’re cognizant of the neighborhood issues and we want to make sure that we create a park that is attractive and used,” said Sanchez.

Based on feedback received at the meeting, the preliminary design will be revised and a new version will be presented to the East CRA Advisory Committee and the Parks and Recreation Advisory Board in the coming months.

There is still no firm date for the McNab Park plans being finalized or for the restaurant opening, and no restaurateur has been selected yet to run the McNab House restaurant.

The original conceptual design for the project included two bed-and-breakfast-type structures on the McNab Park property, which was a controversial element of the project, but that proposal was taken off the table.

The CRA will spend a minimum of $2.7 million on capital improvements in the 2.5-acre park, which is in the East CRA district.

The McNab House, built in 1926, is being moved from its existing site because a developer who purchased the land from the McNab family in December 2018 has plans to build a mixed-use redevelopment project, called Atlantic One, that includes 304 residential units.

Presently, trees on the McNab House property are being cleared away in order to move the house. The garage has been lifted up to allow it to be moved first. 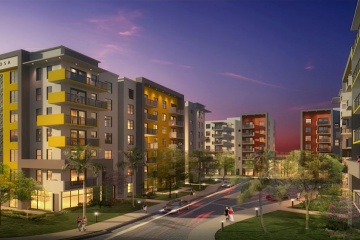