“The building may bear my name,” said Burrie, “but it’s here for the people to enjoy, and for recreation that’s safe and clean.”

The 8,700-square-foot civic center, in Pompano’s Cresthaven neighborhood, includes a reception area, an administrative office, two multi-purpose activity rooms, a conference room, a warming kitchen and a large assembly space with a fixed platform stage and adjacent dressing rooms. The assembly space can hold 170 people theater-style or 120 people banquet-style. The building has a Leadership in Energy and Environmental Design (LEED) certification.

“This is one of the major milestones in our city,” said Mayor Rex Hardin, who praised Burrie for her many years of service to the City of Pompano Beach.

Due to the current Coronavirus public health emergency, usage and events at the Charlotte J. Burrie Civic Center will be limited for the near future.

Burrie, who has lived in Pompano Beach for over 50 years, served as city commissioner of District 2, where the civic center is located. Burrie pushed for a civic center for her constituents from the time she was elected in 2007, until she left office in 2018.

Several years ago, members of the Cresthaven Civic Association spoke at a City Commission meeting and presented a petition that raised $500 towards the new civic center and requested it be named after Burrie.

“This is something that has been driven by the community and that was spearheaded by former Vice Mayor Burrie, and she has achieved her goal in a grand way,” said current District 2 Commissioner Rhonda Eaton. “It’s an incredible asset to our city that we’ll enjoy for decades to come.”

Burrie served the city for 25 years – as an assistant to the city attorney, as city clerk, and as city commissioner. In 2015, she was selected by the City Commission to serve as Vice Mayor of Pompano Beach. Burrie was also an attorney in private practice for almost thirty years.

The city’s Parks and Recreation Department will oversee the programming at the civic center. There are already plans for yoga, fitness, karate, dance and Spanish lessons.

The Cresthaven Civic Association, which was created in 1957, has held its monthly meetings at the local Moose Lodge for the past 15 years. The meetings, which take place on the second Thursday of every month at 7pm, will now be held at the new civic center.

Additional amenities will be constructed on property at 2671 N. Federal Highway, directly north of the civic center, where a Denny’s restaurant once stood. Those amenities will include a pavilion and oval-shaped artificial turf area to be used for community activities, and an open area with playground equipment. Construction is anticipated to begin in the next six months, according to city officials.

In December 2018, the City Commission approved the $1.8 million purchase of the former Denny’s site for the purpose of expanding the Charlotte J. Burrie Civic Center.

Purchase of the property almost doubled the civic center site size from 46,688 to 89,094 square feet (2.05 acres), and increased the parking capacity from 41 spaces to 75 parking spaces.

The exterior of the new civic center features a large mosaic mural, which was created by The Mosaic Team, a group of five Pompano-based apprentices selected by the City in 2017 to carry out various mosaic projects. The team is led by experienced mosaic artist Sonata Kazimieraitiene.

The mosaic, which measures 8 feet wide by 16 feet high, is entitled “Community.” It is located on the west wall of the civic center building, and took about four months to complete, using handmade ceramic tiles.

Laura Atria, the city’s Public Art Program Manager, along with Rosario Harker, one of the mosaic artists, participated in the civic center’s grand opening celebration.

Shiff Construction & Development, a Pompano Beach contractor, constructed the Charlotte Burrie civic center building at a cost of $4,498,475. Construction on the building began in June 2018. The estimated cost to develop the old Denny’s site is between $700,000 and $1 million.

The City will be completing the construction of the amenities on the old Denny’s property in-house, acting as the general contractor, which consists of hiring all the subcontractors under separate contracts.

Even before Burrie came into office, the city had plans to build a civic center, but they never materialized. After considering several sites, the city purchased the original lot on Federal Highway for $1,150,000 in 2013.

Until now, District 2 was one of the only communities in Pompano Beach without a civic center.

“Now this community has this gorgeous building to enjoy and recreate and have fun,” said Burrie. 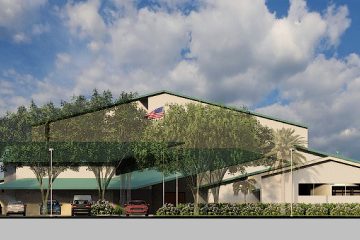