Construction on the main building of the Charlotte J. Burrie Civic Center is anticipated to be completed in approximately two weeks, according to Shiff Construction & Development, the firm hired by the City of Pompano Beach to carry out the project. A date has not yet been established to begin construction on a second structure adjacent to the main building.

The only work that remains to be done on the main building, located at 2669 N. Federal Highway in Pompano Beach, is some interior painting, the landscaping, a final layer of asphalt for the parking area, installation of paver bricks and the placement of furniture. Final approvals from the County, and a certificate of occupancy from the City, are expected to be issued by the end of January 2020. Construction on the main Charlotte J. Burrie Civic Center building began in June 2018.

Additional amenities to be constructed on the site of the old Denny’s restaurant, at 2671 N. Federal Highway, directly north of the main building, are going through the City’s permitting process and a construction start date has not yet been established, according to city officials.

A grand opening date for the main Charlotte J. Burrie Civic Center building has yet to be determined, but the City has said the grand opening does not depend on the completion of the amenities on the old Denny’s site.

The 8,700-square-foot main building includes a reception area, an administrative office, two activity rooms, a conference room, a warming kitchen and a large assembly space with a fixed platform stage and adjacent dressing rooms. The assembly space will be able to hold 250 people theater-style or 120 people banquet-style. The building will have a Leadership in Energy and Environmental Design (LEED) certification.

The amenities on the old Denny’s site will include a pavilion and oval-shaped artificial turf area to be used for community activities, and an open area with playground equipment.

In December 2018, the City Commission approved the $1.8 million purchase of the former Denny’s site for the purpose of expanding the Charlotte J. Burrie Civic Center.

Purchase of the property almost doubled the civic center site size from 46,688 to 89,094 square feet (2.05 acres), increased the parking capacity from 41 spaces to 75 parking spaces, and allowed for more amenities. The vacant Denny’s building was demolished earlier this year.

Shiff Construction & Development, a Pompano Beach contractor, constructed the civic center’s main building on the original site at a cost of $4,498,475. Shiff Construction might also build the amenities on the old Denny’s property, or the City might put that project out to bid. The exact cost to develop the Denny’s site has not been finalized, but the original estimate was approximately $700,000.

The civic center, in Pompano’s Cresthaven neighborhood, is named for Charlotte J. Burrie, who served as city commissioner of District 2, where the center is located. Burrie pushed for a civic center for her constituents in that neighborhood from the time she was elected in 2007, until she left office in 2018, and it was the residents who wanted to name the center after her.

Burrie served the City of Pompano Beach for 25 years – as an assistant to the city attorney, as city clerk, and as city commissioner. In 2015, she was selected by the City Commission to serve as Vice Mayor of Pompano Beach. Burrie was also an attorney in private practice for almost thirty years.

Even before Burrie came into office, the city had plans to build a civic center, but they never materialized. After considering several sites, the city purchased the original lot on Federal Highway for $1,150,000 in 2013.

Until now, District 2 was one of the only communities in Pompano Beach without a civic center. 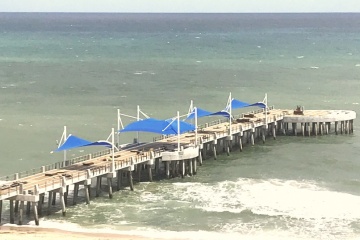