EDITOR’S NOTE:  Below you will find a news story written by Marie Puleo, our senior news reporter.  Marie’s story will give you the facts regarding the silencing of train whistles along the railroad tracks in Pompano Beach, Deerfield Beach and throughout Broward County.  Marie does her job well and reports the story accurately and without opinion.  As a multi-dimensional news organization, we also felt some commentary on this story was necessary.  We considered writing a separate column but realized our critique only needed a few lines.  So…

What the hell are they thinking?  There have been dozens of deaths and injuries in Broward and Palm Beach Counties on the FEC Railroad tracks since the launching of Brightline less than two years ago.  The most recent happened this weekend up in Lake Worth. Obviously people should have learned by now:  When the gates are down, stay off the tracks.  But they haven’t.  The rate of deaths and injuries occurring on our tracks is among the highest in the country.  It seems to me that getting rid of any warning indicators can’t make the situation better and might even make it worse.  The horns shouldn’t be necessary but unfortunately we need to protect our dimwitted neighbors who can’t stay off the tracks.  – Jeff Levine, Columnist/Editor-at-Large

Train Horns Are Silenced Along FEC Railway In Broward County

At midnight on May 18, 2019, the stretch of the Florida East Coast Railway (FEC) that runs from Hallandale Beach to Deerfield Beach became what is known as a “quiet zone,” meaning that, from now on, all trains traveling the corridor will not signal their horns as they approach railroad crossings. Train horns can still be sounded if the train engineer perceives an emergency or threat on or near the tracks, or if there is construction in the area.

Signs that read “No Train Horn” have been installed at rail crossings within the quiet zone as a warning to cars, cyclists and pedestrians approaching the tracks.

“It is going to be a welcome addition to South Florida,” said Pompano Beach Mayor Rex Hardin. “People have been losing sleep with the trains coming through and the frequent blowing of the horns. Now we truly will have some peace and quiet.”

Establishing a quiet zone along this portion of the railroad tracks was a project of the Broward County Metropolitan Planning Organization (MPO) that was conceived five years ago, when Brightline, soon to be rebranded Virgin Trains USA, announced that it would start an express commuter service with 32 trains a day running along the FEC tracks.

Residents voiced concern about the increased train horn noise, and elected officials worked through the Broward MPO to coordinate the quiet zone as a solution, said Paul Calvaresi, the MPO project manager.

The Federal Railroad Administration (FRA) sets the process for creating a quiet zone, which started with determining where to place supplemental safety measures at railroad crossings, in order to reduce the overall average risk of the Broward County corridor, which is intersected by eight municipalities. The safety upgrades were installed only at crossings that presented the highest risk, as per a quiet zone risk calculator created by the FRA, said Calvaresi.

Working with the Broward MPO, Brightline began constructing all of the necessary improvements in late 2016. The supplemental safety measures, which were carried out at 24 rail crossings, are designed to keep cars from going around the gate arms. At one crossing, a 60-foot-long raised median was installed, and at the other crossings, gates with two arms were replaced with gates with four arms, which span the entire intersection rather than just a portion of it. Four-armed gates were installed at four crossings in Pompano Beach: Sample Road, NE 10th Street, NW 31st Avenue and SW 2nd Street.

The $5 million project, considered a quality-of-life improvement, was carried out with federal transportation funds allocated by the Broward MPO.

Also in Broward County, the CFX tracks used by Tri-Rail trains became a full quiet zone about six months ago, with assistance from the Broward MPO.

The new quiet zone along the Broward County portion of the FEC rail line is the longest single quiet zone in the country, said Calvaresi. The 26-mile corridor has 64 crossings, while most quiet zones have an average of 5 or 6 crossings.

All train horns in the United States can blow up to 110 decibels, which is about as loud as a rock concert, said Calvaresi, and all trains in the U.S. are supposed to sound the horn in a designated pattern, two short and one long, as they approach the crossing. The problem with the eastern part of the county is that a lot of the crossings are too close together to get through the cycle, so it sounds like one continuous horn.

It has been reported that since Brightline began test runs in the summer of 2017, there have been 15 train deaths on the FEC tracks, and at least ten people have been seriously injured. Some of the casualties were ruled suicides; others were due to “trespassers,” meaning people on areas of the tracks where they shouldn’t be. Broward County is number one in the state, and number eight in the nation, for trespassers on railroad tracks, Calvaresi said.

While some people may have concerns about an increased safety risk now that the train horns have gone silent, Calvaresi said: “You still have the flashing lights, bells and the arms coming down to inform motorists, pedestrians and cyclists that a train is coming.”

“You would have to ignore those safety features and go around them to put yourself at risk,” said Mayor Hardin.

“We followed the FRA’s process to mitigate the risk of removing the train horns,” said Calvaresi. “And we’re working with our partners at Brightline, and anyone who will listen, to communicate and stress the importance of railroad safety.”

34th Annual Ladies Fish Off is Coming to Pompano Beach/LHP 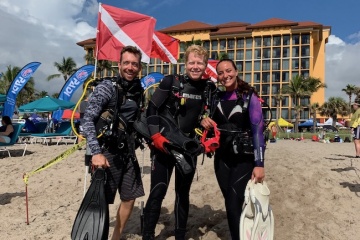