The Pompano Beach Atlantic Blvd. Bridge improvement project has entered its final phase and is set to be completed by the end of June.

The bridge makeover, which was launched in December 2017, includes improvements to the bridge’s north and south façades and the tender house, new sidewalks, computerized uplighting and land-based lighting, and the most striking features, large decorative sails on the four corners of the bridge and marine-inspired murals by Pompano Beach artist Dennis Friel.

>>>CLICK HERE TO SEE INCREDIBLE PICTURES OF THE BRIDGE ARTWORK

The bridge’s concrete side barriers have been replaced with more open metal railings that offer pedestrians and vehicles better views of the Intracoastal, as well as prevent rain buildup along the roadways.

In addition, a pedestrian waterfront promenade has been built under the east side of the bridge to connect new restaurants, shops and other amenities from the south to the north.

According to Horacio Danovich, the city’s Capital Improvement and Innovation District Director, the bridge sidewalks, the promenade under the bridge and the painting of the bridge walls and railings should be finished in early June.

The installation of landscaping is expected to be completed by mid-June. It will include one large palm tree, shrubs and some smaller trees at each corner of the bridge.

The two tensioned sails at the west end of the bridge had to be remade because each of the 53-foot-high masts that hold the sails had one arm that was longer than engineered. On the southwest corner, one arm was too close to the roadway for safety standards, and on the northwest corner, one arm extended into the private property of Houston’s restaurant. Both arms, as well as the cables, had to be shortened. The two sails at the east end of the bridge are scheduled to be installed at the end of May, and the sails on the west side of the bridge will be installed soon after.

A decorative panel shaped like a wave runs along the east side of the promenade underneath the bridge. The wave panel has light strips that will illuminate it at night and can turn multiple colors. The lighting for the sails at the corners of the bridge can also turn different colors. For example, on the Fourth of July, the colors could be red, white and blue, and on St. Patrick’s Day, the color could be green.

“It’s a gateway to our beachfront that invites people to enjoy all the amenities that are being developed in the Fishing Village and the surrounding area,” said Pompano Beach Mayor Rex Hardin.

The total cost of the bridge improvement project is $5 million, which is being funded by the Pompano Beach Community Redevelopment Agency (CRA). The idea originated in 2010 as an initiative of the CRA and the advisory committee of the East CRA district.

In 2013, Currie Sowards Aguila (CSA) Architects – the Delray Beach firm that designed the Pompano Beach Pier Parking Garage – teamed up with the engineering firm Kimley-Horn and started the designs for the bridge project. The construction of the bridge project has been carried out by Burkhardt Construction.

Brandon Rhodes, Burkhardt Construction’s project manager, said: “From day one when I saw the plans and the renderings, I was very excited to be a part of it, not only because I grew up in the area, but because I think this bridge is going to be the most unique bridge not only in Broward County, but in South Florida.”

Rhodes said the greatest challenge of this project, compared to others he has worked on, was having to fit foundations, sidewalks and walls in a tighter space, while avoiding the existing utilities in the ground. That was particularly challenging when constructing the foundations for the sail masts on the bridge corners, and drilling was at 45 feet deep.

The sails on the bridge will be seen all the way from U.S. 1 when heading east on Atlantic Boulevard.

“This magnificent project will be an attraction in its own right,” said Danovich. “Between the majestic sails and lights and the under-the-bridge promenade to get across Atlantic Boulevard, our residents and visitors will have a chance to enjoy this work of art.”

EDITORS NOTE:  This story was updated on 5/24 to reflect the dates of the sails being hoisted. 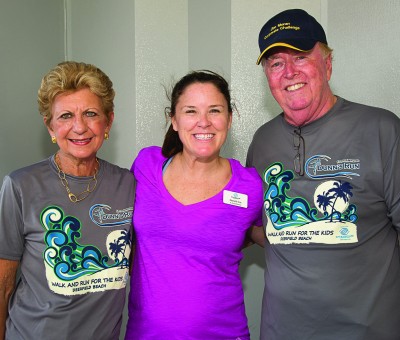