Public input meeting to select key elements of the botanical gardens is scheduled for Dec. 6

The Pompano Beach Community Redevelopment Agency (CRA) has found a master operator for the McNab House and Botanical Gardens restaurant, café and event space. The CRA Board, at its Nov. 15 meeting, accepted an unsolicited proposal from Mad Room Hospitality and authorized CRA staff to begin negotiating a development agreement.

In March 2020, the historic McNab House and its two-story detached garage were moved from 1736 E. Atlantic Boulevard to McNab Park, just five blocks east, with the objective of transforming the structures into a new restaurant facility and the surrounding park into a public botanical garden.

In April 2022, the CRA issued a Request for Proposals seeking a master operator to renovate the McNab House (the restaurant) and garage (the café), construct a new kitchen annex, improve the surrounding area for outdoor dining, and design the dining program. Responses to the nationwide search were due June 9, but no proposals were received. However, in August, the CRA received an unsolicited proposal from Mad Room Hospitality.

Mad Room Hospitality, headquartered in Coral Gables, is co-owned by brothers Zach and Ben Bush and Bill Fuller. The business partners have experience in the preservation of historic venues.

The Mai-Kai was forced to close in 2020 after a plumbing incident caused flooding that fully damaged the venue’s kitchen. The restaurant, which first opened in 1956, is on the National Register of Historic Places. Mad Room Hospitality and The Barlington Group anticipate a limited reopening in 2023, and a grand reopening in 2024.

Pompano Beach CRA Project Manager Sarah Mulder said what makes Mad Room Hospitality stand out is the firm’s expertise in historical preservation, and also as a restaurant operator and an event venue operator.

The Mad Room Hospitality team presented its proposal during the CRA Board meeting. Earlier in the month, the proposal was presented to the East CRA Advisory Committee, which voted unanimously to move forward with it.

“We are in a unique position to make your investment in this location a success, while also honoring the history of the McNab family and historic Pompano Beach,” said Darius Green, director of operations for Mad Room Hospitality.

In the conceptual master plan, the historic house-turned-restaurant would have several outdoor dining areas, all focused on a lake feature with a large existing ficus tree at its center. The garage would become a courtyard café/bar, and a kitchen facility would be built directly behind the house, which sits at the northeast corner of the site.

The gardens would also include an event facility and an event lawn overlooking the lake, a tea house situated on an upper terrace lake, and a stream with a foot bridge that connects to the larger lake. At the northwest corner of the site would be a children’s garden with a playground, a classroom facility where children can learn about plants, and adjacent restrooms for visitors to the park. At the southeast corner of the site would be a maintenance building. Public art would be incorporated throughout the gardens.

Mad Room Hospitality would like to eliminate the tea house at the southwest corner of the site, and put the children’s facilities and adjacent restrooms there instead. At the northwest corner of the site, a second open-air event lawn would go where the children’s facilities and restrooms were to be located. In addition, instead of building a separate kitchen annex, the event facility would be combined with a commercial kitchen to serve both the McNab House restaurant and on-site events, including weddings.

Green said that having the tea house at one corner of the 3-acre property, and the kitchen at the opposite corner, would not be feasible, and Mad Room Hospitality did not see the tea house as generating enough revenue to be a stand-alone spot.

He noted that putting the extra event lawn at the northwest corner of the site would get the children’s facilities away from Atlantic Boulevard; would allow multiple events to take place at the same time; and would enable Mad Room Hospitality to generate more income, which would benefit the city because it would increase the amount of rent they would pay.

The changes that Mad Room Hospitality hopes to make still need to be discussed in more detail with CRA staff, and there will also be public input, said Mulder.

The botanical gardens will be a public park with fencing around the perimeter. While the concept calls for a private operator of the restaurant, garage café and event space, the gardens will remain open to the public free of charge, seven days a week during business hours, and will be operated by another entity, such as a non-profit organization or conservancy, in cooperation with the master operator.

Mad Room Hospitality envisions the McNab House restaurant as having a “coastal farmhouse” look – a blend of neutral soft tones and natural woods, with coastal touches such as shades of blue glass and “beachy” art.

“We want to accent the home’s special signature features and highlight the architectural details,” said Green. “We will work closely with our design team and the CRA to select the best interpretation for the McNab House.”

The cuisine would be moderately priced traditional American dishes with “a savory modern twist,” centered around an organic farm-to-fork concept to focus on Florida’s seasonal flavors. The restaurant would be open seven days a week for lunch and dinner, and would close at 10pm or 11pm.

The McNab House cellar would be a wine bar with a Paris-in-the-1920s ambiance, featuring curved banquettes, globe light fixtures, and stemmed glasses hanging over a marble bar top. It would be a “sophisticated yet approachable” destination suitable for a romantic date or meeting up with friends for happy hour. It could also be a place for wine tastings, wine and food pairings, and wine educational programs.

The first of three public input meetings for the McNab House and Botanical Gardens site plan process is scheduled to take place on Dec. 6 at 6pm during a special meeting of the East CRA Advisory Committee at the Emma Lou Olson Civic Center, 1801 NE Sixth Street. The public will be able to participate in selecting the key components of the botanical gardens, such as the possible plants and flowers to include, playground elements, seating, water features and event ideas. Those in attendance will be able to “vote” via their phone through a special app.

This is the most recent story. 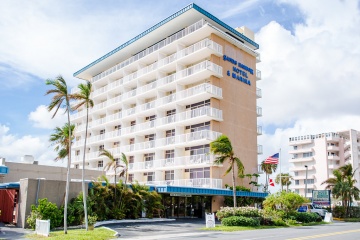