City-owned property that was to be used for the construction of outdoor amenities for the recently opened Charlotte J. Burrie Civic Center, located at 2669 N. Federal Highway in Pompano Beach, will be used instead as a parking area by Pompano Ford Lincoln, in connection with its nearby car dealership for at least three years, possibly longer. The city is also purchasing a neighboring site from the car dealership and swapping some land with Broward County, in part, to create an access road for Cresthaven residents.

The City Commission approved on Tuesday a license agreement allowing Pompano Ford Lincoln to use the majority of the property, located at 2671 N. Federal Highway, directly north of the civic center, for parking up to 82 vehicles.

Pompano Ford Lincoln, located at 2741 N. Federal Highway, will pay a monthly fee to use the property, which will generate $24,600 annually in revenue for the City.

The property is where a Denny’s restaurant once stood. In December 2018, the City Commission approved the $1.8 million purchase of the former Denny’s site in order to create outdoor amenities at the Charlotte J. Burrie Civic Center, which opened this past March.

The parking license agreement between the City and Pompano Ford Lincoln is for a period of three years, with the possibility of extending it for up to three additional one-year terms.

The amenities for the Charlotte J. Burrie Civic Center to be constructed on the old Denny’s site included a pavilion and oval-shaped artificial turf area to be used for community activities, and an open area with playground equipment. In March, city officials said construction of the amenities was anticipated to begin in the next six months, at an estimated cost of between $700,000 and $1 million. Those plans are now on hold.

Purchase of the old Denny’s property almost doubled the civic center property from 46,688 to 89,094 square feet (2.05 acres), and increased the parking capacity from 41 spaces to 75 parking spaces.

Berman said the funds that would have been used to build the amenities on the old Denny’s site will be used instead to pave and develop a piece of property directly west of the civic center that the City is purchasing from Pompano Ford Lincoln.

In June, the City Commission approved the purchase of the property, located at 2601 NE 16th Avenue, for $820,000. Pompano Ford Lincoln wanted to sell the City the property because it needs income to build its parking garage, said Berman.

Purchase of the 30,928-square-foot vacant lot will allow the City to construct a road that can be used by residents of the Cresthaven neighborhood to access the civic center from the west, or back of the building, rather than from Federal Highway.

In order to construct the access road, the City is exchanging a portion of the property it is acquiring from Pompano Ford Lincoln for a portion of the Broward County sewer lift station property located at 2600 NE 16th Avenue, directly to the west. This will give the City the land configuration it needs for the access road, and will also allow for the County’s future expansion of the lift station which serves the Pompano Beach residents in that area.

A property exchange agreement with Broward County was approved by the City Commission on Tuesday.

Pompano Beach Mayor Rex Hardin said now that the City is acquiring the property from Pompano Ford Lincoln, “quite likely we will not need the Denny’s property,” and the City could end up selling it “down the road.” 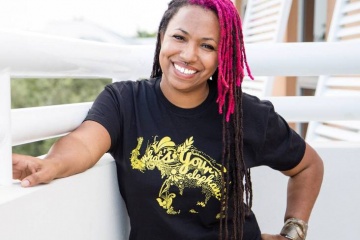