Ryan Mullarney is Named Police Officer of the Year

Officer Ryan Mullarney was recognized as Police Officer of the Year by Lighthouse Point Police Chief Ross Licata for his “outstanding work ethic” and accomplishments in 2018, which included actions he took to help save the lives of four Lighthouse Point residents who were in respiratory arrest from an opioid overdose.

Mullarney started his law enforcement career with the Lighthouse Point Police Department in 2011, serving as a dispatcher. In 2015, after completing his police training at the Broward Institute of Public Safety in Davie, he was sworn as a police officer.

Last year, Mullarney responded to four separate opioid emergency calls, and in each case, found an individual who was in dire physical condition — unconscious, barely breathing, with bluing lips and unresponsive to physical and verbal stimulation. In some cases, CPR was being administered, but to no avail.

As the first officer to arrive on the scene, Mullarney quickly identified the problem as a drug overdose, and using training he had recently acquired from Lighthouse Point paramedics, he administered naloxone, also known as Narcan, a medication designed to reverse the effects of opioid respiratory distress. All of the individuals — two men and two women ranging in age from their mid-30s to late-50s — survived.

“As you can see, here in Lighthouse Point, we have not been immune to the devastating effects of the nationwide opioid epidemic,” noted Chief Licata.

Opioid painkillers, which are highly addictive in nature, are largely being blamed as the root cause of the opioid epidemic. These prescription opioids include fentanyl and OxyContin.

Mullarney said that fentanyl has become a popular substance to add to street drugs, such as heroin.

“It’s kind of a universal precaution that you treat everything nowadays like it’s going to have fentanyl in it, because you don’t know if it does,” he said.

Mullarney said that in his eight years as an officer, he has seen an increase in opioid overdoses.

“When I worked in dispatch, you’d get them every now and again, but since I’ve been on the road the past couple of years, it’s really ramped up,” he said.

To combat opioid emergencies, all Lighthouse Point police officers now carry naloxone, while the city’s paramedics have their own supply. Mullarney said it’s important for officers to carry naloxone because it might take fire rescue a little bit longer to arrive on the scene, and “seconds count.”

As Police Officer of the Year, Mullarney was also recognized for his investigation and processing of a Lighthouse Point home burglary in which the intruder had broken a door window and received cuts while entering. Mullarney collected a small amount of blood trace evidence that led to a DNA hit on a violent offender from Fort Lauderdale. The subject, who had an extensive criminal history for robbery, aggravated assault with a firearm, drug trafficking, felony domestic violence and child abuse, was subsequently charged and arrested.

Mullarney also assisted in the investigation of an armed subject who was deemed to be a safety risk, which led to one of the first Risk Protection Orders issued in the state of Florida following the passage of the Marjory Stoneman Douglas High School Public Safety Act in March 2018.

In addition, Mullarney serves as a field training officer for new recruits, and has been active in the annual Shop with a Cop and Special Olympics Tip a Cop programs, which raise thousands of dollars for area children and adults.

“I’m extremely proud of Ryan and his accomplishments,” said Licata. “He’s a fine young officer who is committed to providing our residents with quality policing and customer service, and this award is well-deserved.”

“It is a great privilege to receive this honor,” said Mullarney. “I am very grateful to my family, co-workers, supervisors and everyone else along the way who has inspired me to be the police officer that I am today.”

LHP's Firefighter of the Year 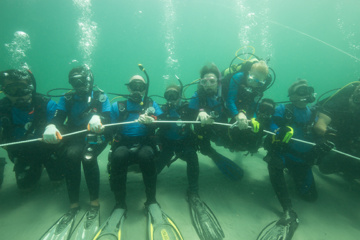