“Mike brings a positive attitude to work every single day, and has a willingness and commitment to doing the best job he can,” said Gilmartin. “Along with that brings a safer community.”

Della Rocca was hired by the Lighthouse Point Fire Department in 2007, just two months after graduating from the Broward Fire Academy in Davie. It was the very first interview he went on for a firefighter paramedic position.

“I was really lucky to get here at the start of my career,” said Della Rocca, “I think it was meant to be.”

The department has a total of six fire inspectors, who, collectively, perform about 200-300 fire inspections per year in between their firefighter-paramedic duties, said Della Rocca.

Gilmartin praised Della Rocca for “going above and beyond” in his role as a fire inspector and for serving as an “ambassador” of the fire department through his positive interactions with the city’s business and property owners.

Della Rocca grew up in West Boca, but spent a lot of time in Lighthouse Point visiting his aunts and uncles who lived here. He said he likes the city’s “small town” feel, and plans to be a lifelong Lighthouse Point firefighter.

Before setting out to pursue a career in the fire service, Della Rocca’s “adventurous spirit” led him to travel and explore different parts of the country.

His interest in becoming a firefighter was ignited while he was living in California. One of his favorite sports was mountain biking, but It seemed every time he and a group would go for a ride on trails in the back woods, someone would get hurt. He decided to take a basic medical training class at the community college, and part of the program was doing ride-alongs with fire departments.

“That’s when I got the experience of going to a fire station and seeing the culture and environment they worked in,” he said. “That sparked an interest in me because it had the excitement of getting a 911 call and not knowing what type of emergency you’re going to respond to.”

One of the things Della Rocca likes most about his job is the excitement and unpredictability of not knowing what the next call is going to bring, but also having the training to be able to solve different problems in different ways.

Receiving the Firefighter of the Year award “is an honor, and a humbling experience,” said Della Rocca. “I’m blessed that I get to work where I work, and do what I do for a living, and protect the citizens here.”

On the Road to Shangri-La 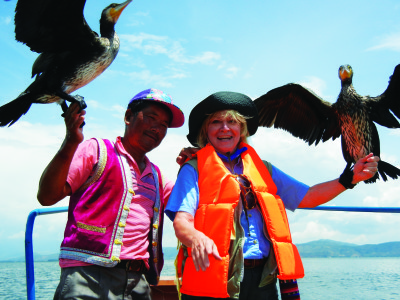