Last November, 71 percent of the voters in Florida approved an amendment to the Florida Constitution that legalizes medical marijuana. In Lighthouse Point, 69 percent of voters said ‘yes’ to the amendment.

In June, State legislation was adopted to implement the medical marijuana amendment and govern Florida’s medical marijuana industry. It gave cities two options: Either ban dispensaries from being located within their boundaries, or regulate them to the same extent that they regulate pharmacies.

“The state left the cities with a Hobson’s choice,” said Lighthouse Point Mayor Glenn Troast. “As a result of this ‘take it or leave it’ approach, city commissions are faced with making decisions without the ability to customize that decision for what’s best for their community.”

Under the Florida state law, dispensaries are treated as pharmacies for zoning purposes, which means that wherever a pharmacy is allowed to operate, so is a dispensary. The new legislation mandates that a local government cannot place any restrictions on the number of dispensing facilities allowed within its jurisdiction, but does not give local government the ability to provide regulations for distance separation from schools, parks, churches and other dispensaries.

“Because Lighthouse Point is such a small city, we did not feel that it was in the best interest of our residents to say, ‘You can put them anywhere you want,’” said Troast.

Another concern some cities have is that because dispensaries are still not legal under federal law, banks aren’t allowed to accept money from them, so they operate on a cash-only basis, which could make them a target for theft.

Faced with the choice of not being able to regulate dispensaries or to ban them completely, other cities in the area, including Lauderdale-By-the-Sea and Sea Ranch Lakes, have chosen to ban them. Deerfield Beach voted last month to allow them, while Boca Raton and Coral Springs have put moratoriums in place.

“I’m sure as time goes by cities will reexamine these things as, hopefully, the state frees up some of the regulatory authority,” said Troast.

Since 2014, the City had a moratorium in place on the approval or issuance of any licenses for any use that involved the cultivation, processing and dispensing of medical marijuana. That moratorium was set to expire October 31, 2017. The new ordinance supersedes and replaces the moratorium. 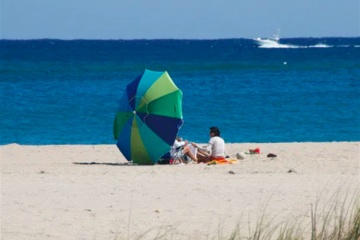