I am an astronaut, weightless, pushing effortlessly off the edges of my vessel in outer space. I am an embryo, floating in a mother’s womb. I am bathing in a giant bowl of lime Jello. Now I am me, staring at the sky, laying peacefully on my back atop an enormous lily pad in the center of a lake, surrounded by mountains. This is where my imagination took me as I floated in a pool of highly-concentrated Epsom salt inside an isolation pod at Float8 Wellness Lounge, Deerfield Beach’s new float center.

If you haven’t heard of floating, it’s a practice that originated in the 1950s by a neurologist named John C. Lilly. He wanted to explore what happens to the mind when it’s completely deprived of sensory input. In the original tanks, subjects were suspended vertically in 160 gallons of water wearing a nightmarish-looking, latex blackout mask that supplied the subject with air and blocked the eyes from light. As the practice developed, the tanks were adapted to allow subjects to float horizontally — first in sea salt water, which was irritating to the skin, and eventually in massive amounts of Epsom salt.

In recent years, sensory deprivation tanks have been used in experimental therapies for treating post-traumatic stress disorder (PTSD) and anxiety. They’ve also gotten trendy for the practices of meditation and stress reduction. The pods are designed to simulate zero gravity, pitch darkness and absolute silence. By taking away the sensations of sight, weight and sound, one is left with merely themselves — one’s mind and spirit.

Matt and Destiny Beck, the husband-and-wife co-founders of Float8, were gracious enough to let me float for two 90-minute sessions for this edition of Urban Adventure.

The vibe at Float8 is calming and welcoming. The lounge serves Kombucha on tap and fruit-infused water. The walls are lined with stunning psychedelic art on loan from Moksha Arts Collective in Miami. Each of the four private float rooms are quite Zen, stocked with lavender-scented bath products and muraled with floor-to-ceiling photography of picturesque Florida beaches (by Miami-based photographer Jason Korner).

The float pods are about 5-feet wide by 7-feet long (big enough to not feel claustrophobic) and filled with body-temperature water. A foam noodle is provided to help support your head while floating, and soothing music plays inside the pod for the first few minutes to ease you into the process before fading to silence.

Once floating and buoyant, I processed the pitch darkness (so dark my eyes never adjusted). Then, the silence, which forced me inward.

At first my head was noisy and chaotic, darting from thought to thought like a pinball in an arcade machine. I drew upon the few meditation tools I’ve learned, focused on my breath and tried to disengage from the chatter. While the thoughts didn’t slow right away, they did seem to get further and further away. I suddenly began to feel more like a passive bystander, eavesdropping on a crowded room.

As I melted further into the experience, my mind felt completely out of my control, as if I was listening to a radio as someone rapidly turned the dial from station to station. I heard songs flicker on and off, conversations and laughter. Neurons seemed to be firing haphazardly. Then images began streaming through my mind like a movie montage of people and places from my past.

My mind drifted to strange, surprising places. At one point I was walking through my grandparents’ old house in Tustin, California, remembering every minute detail of their home — the silver-plated candy dish with the stale, sticky butterscotch candies, the creak of the wooden floor boards going into the family room, the musty smell of the closet where they kept the board games, the sound of my grandmother scraping white toast with margarine and cinnamon sugar, and the hand-painted Russian stacking dolls on their bookshelf.

As I drifted further away, I lost track of my body from the neck down entirely, giving me the sensation of being merely a bobbing head in the middle of the pod. Soon I lost track of that too, as if I was now just a ghost hovering in the pod. I entered a dream state, resting on that blissful ledge between asleep and awake. I oscillated in and out of this state.

At another point, my mind began to wrestle with a decision I had been sitting on. Initially, my mind obsessively ran through every pro and con, but after I had floated off once more, I found myself at peace with an answer without really knowing how I had even arrived at it.

There seems to be two ways to approach the tank: one is to meditate, slowing the mind into a deep state of dreamy relaxation; the other is to enter the tank with an intention or problem and let the space trigger creativity. I seemed to experience a combination of both.

While both my floats were fairly profound, Matt Beck said not to be surprised if your first experience isn’t. Matt’s own first float was difficult. At the time, he was overworked and overstressed, running Brotherly Love Productions (the company behind giant music festivals like Suwannee Hulaween, AURA Music and Arts Festival and III Points).

“It was an hour of nothing when my mind was all over the place. I was clawing at the walls,” he said. “I was itchy and totally distracted. It took everything I could do to get through the hour, but I knew deep down that it was something I should keep with,” he said.

For his second float, Matt decided to be a little more prepared. He downloaded a meditation app and did a few days of guided meditations, which gave him something to take with him into the tank.

“It helped me tremendously to have something to focus on,” he said.

By his third float, Matt said he could feel the difference.

“I was much more calm. I wasn’t feeling overwhelmed for the first time in a while. When I left, I wasn’t stressed about looking at my phone and who had called me while I was in there,” he said.

About a year after his first float, Matt reached a breaking point with the music business. He was desperate to do something new.

“The music industry was chewing me up. I was even thinking about coin-operated laundry mats — any way to get out,” he said. “I started doing some research and found out about a national float conference in Portland, Oregon.”

He attended the conference, did an apprenticeship at a float center and started plans to open his own. When Destiny found out about a space for lease next to her yoga studio in Deerfield Beach, the couple seized the opportunity. Now both Matt and Destiny hope to build a sense of community at Float8. In addition to floating, the center will offer workshops, art events and community gatherings.

“One of the things we loved most about the music business was building a family of artists and dedicated fans,” said Destiny. “At Float8, we hope to cultivate a community of conscious, like-minded people.” 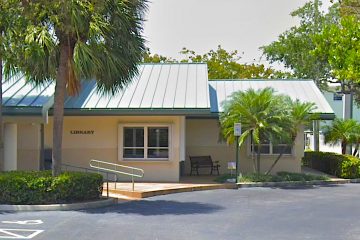