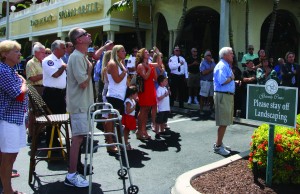 As friends and family gathered, facing the newly dedicated flagpole at Bonefish Mac’s Sports Grille in Lighthouse Point, the Pledge of Allegiance was led by Chuck McLaughlin, followed by Broward County Commissioner Chip LaMarca’s reading of the proclamation that dedicated August 7th as Kevin Horkheimer and Bill Elliot Flag Day.

Being honored posthumously at the dedication was Firefighter Bill Elliot, a Lighthouse Point resident who served with the LHP Fire Department and then joined the Pompano Beach Fire Department where he served for 23 years.  He tragically lost his life in a training accident in January 2012. Also honored was LHP firefighter, Lieutenant Kevin Horkheimer, who lost his battle to cancer in October 2012. Kevin served for 37 years with the LHPFD and also volunteered and coached with the Recreation Department during that time.

Both the members of the Horkheimer family and Elliott family were on hand to receive proclamations. Also present to honor their fallen comrades were members of the Lighthouse Point and Pompano Beach Fire Departments.

Bonefish Mac’s Sports Grille in Lighthouse Point, a popular local restaurant with strong ties to the community, hosted the Exchange Club of Pompano Beach as its owners, Chuck, Jane and CJ McLaughlin, dedicated the Bonefish Mac’s flagpole to the memory of two local hometown heroes. 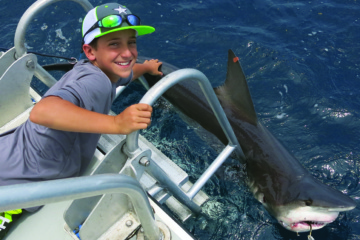