Having met Lighthouse Point resident Cindy Rohkmann for the very first time a short time ago, I believe, and so do the many I’ve spoken to since, think we may very well be speaking about an angel — especially to birds and animals.

The dictionary tells us a person having qualities such a beauty, purity and kindness is an Angel of Mercy sent by God. Cindy Rohkmann’s passion, love and dedication to all living creatures have already made her a legend, far beyond our borders.

Born in Portsmouth, New Hampshire 74 years ago, Cindy has brought a multitude of joy and relief to hundreds of people that have left injured wild birds and a big assortment of other Florida wildlife on her doorstep through referrals, knowing they would have the best chance of surviving in her capable hands. “Because of all the bird and animal care I’ve given through the years, I became a vegetarian 30 years ago. I certainly could not just ‘treat ‘um and eat ‘em’.”

Cindy has been a happy resident in Lighthouse Point for 49 years. Early on, she worked at a few odd jobs, but decided to run her own catering business for about 8 years to help pay for her youngest son to go to college. “Some of the LHP residents should remember me for doing parties in their homes.”

Her intense love for birds eventually led her to become a volunteer at the South Florida Wild Life Center (formerly known as Wild Life Center). “Soon, I found myself rescuing every creature imaginable by climbing trees, jumping into canals and running them down with a net,” she declared. Cindy also has taught a class at the center called ‘What You Should Do When You Find Injured or Orphaned Wildlife.’ The center has two ambulances to deliver and pick up wild life, usually stopping by Cindy’s house around noon each day for pick up and delivery. During the week, granddaughters Brooke, Samantha and Alexandra come by to help grandma with certain tasks.

“The center sometimes delivers wild rabbits and baby owls for me to raise. Raising baby owls requires two weeks in an incubator, an animal carrier for two weeks, and then outside to a flight cage that allows them to get strong, learn to fly and catch crickets,” she said. “After three months they are released at dusk during an event called ‘hacking them out’ when we invite school children to witness this very emotional event. We get 25 to 35 owls each year. Having these hacking event classes at schools grounds relating to the release of birds became just as important as it was to educate them inside the schools and churches.”

25 years ago, Cindy became state-licensed as a Wildlife Rehabilitator and has a Federal Permit with the Florida Department of Interior. This gave her permission to handle the migrating birds she adores so much.

Her fascination with birds started early in life when she became especially fond of finches, cockatiels, parrots, sulpher-crested cockatoos, blue and gold macaws, and scarlet macaws. But her interest does extend to all living things, including raccoons, opossums, squirrels, roosters, iguanas and ball pythons, as well as coatmundi (South American), many of which have been left on her door step.

The South Florida Wild Life Center provides Cindy with food, such as frozen mice for owls, fish for pelicans, insects for baby birds, crickets and meals worms for opossums, formula for baby squirrels, opossums, raccoons, baby cottontails and marsh rabbits. The center itself often drops off injured animals and birds almost daily at her home for care and rehabilitation.

“A problem called imprinting shows up occasionally when a bird or animal becomes attached to the first person they become acquainted with,” she said. This phenomenon occurs if a bird focuses and becomes attached to a person instead of the parenting bird, and as a result makes releasing that bird a serious problem. “I personally began raising birds of prey, so they could be releasable — to be free! This eliminated the problem of a bird focusing on a particular person,” Cindy explained.

A few years back Cindy was presented with the Lighthouse Point Keepers Award for her generous humanitarian effort in the community for almost 50 years, during the Keeper Day ceremonies.

“I have some happy stories and some sad stories I’ve carried with me through years, such as the time Lighthouse Point policemen brought a goat to my home they had loaded into the back of their patrol car. Then one day, I was called to pick up a pelican at the Deerfield pier. I placed him in a box, and drove off in a conversion van. Somehow the pelican escaped and began poking his head out the driver’s side window to the amazement of other motorists who laughed, hysterically.”

Cindy’s life is filled with surprises. “Another day, I received a phone call regarding a huge parrot that was seen on a railing on the Intracoastal at Riverside Drive. As I arrived, people were feeding him cocktail peanuts. Slowly, I approached this beautiful scarlet macaw, and without hesitation he hopped right onto my outstretched hand and I placed him on the passenger side armrest. He seemed fine, but in a few minutes as I’m driving toward home, he moved over toward me, laid his head on my shoulder and said, ‘Oooh.’ For the next few days, the parrot said nothing, but one day as I was ironing he suddenly blurts out, ‘Hi Barbara, hi Pedro.’”

“Every so often a person comes to the door not really knowing too much about animals such as the woman who came to my doorstep and said, ‘Here, these are baby squirrels.’ They were baby rats.”

Some stories are more unique than others. “There was this one evening, two bikers dressed in leather and chains came to my home to tell me there was a vulture in this little box they handed me. Opening the box, all I saw was an injured pigeon. I didn’t have the heart to tell them it was just a pigeon.”

There are times when danger lurks. “On a trip to the Galapagos Islands, I was able to cut about 30 feet on monofilament line off a baby Galapagos sea lion while the rest of the tour group distracted the Beach Master from running me down. A Beach Master is the big male sea lion that protects his harem of ladies and the kids from harm.”

One day in Pompano, Cindy picked up an injured kestrel (our smallest falcon) and kept it for 2 weeks while it recovered from its injuries. When she brought it back, out of the tree across the street flew its mate. She had waited all that time for him to return. ‘These are some of the things I will never forget,” she exclaimed.

“Years ago, they had exotic pet shows in the area. During the show, a few foxes were found wandering around; one in Hollywood trailing a chain, and another in Coral Springs with a rope around her neck and missing her tail. When it was decided they were brother and sister, the foxes were sent to me to foster until a home could be found. Since it was August, I kept them inside in the daytime and at night outside in the flight cage with a block of ice for exercise. Two weeks later, a wonderful man offered to fly them to their new home in Virginia in his private jet. Months later, I received a photo of the foxes in their new white coats, playing in the snow. Some stories I can’t forget.”

Cindy would like to see more empathy toward her precious birds. “There are the times I could really cry like the time tree trimmers cut down a big ficus tree and in it were five different nests with a total of twenty-six common grackles. Their mom would have done such a good job it only given a couple more weeks.”

Five years ago, Cindy released a screech owl in her yard. Well, four years later, she was still putting out the food for the same bird. “Three years ago the owl brought a mate along, so I put two mice out instead of one. Then there was this great horned owl that was accidentally raised on white mice instead of black mice and when released went to the nearest golf course and chased down golf balls, thinking he was chasing white mice. He had to be recaptured and retrained.”

For the last 10 years Cindy’s goal has been to get as many people to put up nesting boxes at schools and other educational institutions, such as Gumbo Limbo. “A screech owl needs a hole in a tree to raise their young. They do not build the traditional nest. People do not seem to leave up dead trees with nice holes in them. So nesting boxes are the answer.” Cindy has delivered nesting boxes to every single park in Lighthouse Point.
Through the years, she has held programs at the library for the LHP Recreation Department for their summer programs, and the Boy Scouts, as well. Until two years ago, Cindy retired ago from a five-year teaching assignment at the Trinity Learning Center. “I find that teaching children about wildlife, teaches them about life itself and how to become a kinder and gentler person.” This lady is certainly the perfect role model.

“People are so thankful they can find a place to bring their injured animals and birds. And I am so thankful and thrilled I have the South Florida Wild Life Center.
Sometimes children bring me dead animals or birds. You don’t tell children that they are dead, you thank them for being so kind.” 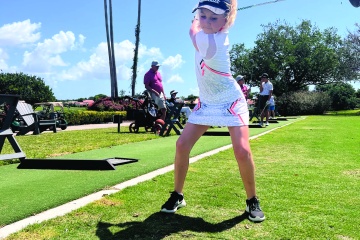