Back Then, A Man Called it his Fifty-Cent Yacht

He would come to the pier about noon every day, walk midway out, unfold his chair, and open his cooler. Popping a cold one, he’d stare out at the ocean. Back in 1958, this New York City lawyer considered his patch of wooden planks: “The best darn fifty-cent yacht in the world. Don’t feel a rough wave and steady as she goes.”

Deerfield’s pier has always been considered the city’s icon, and like all old timers, it, too, has a few “fish” stories.

The pier’s real beginning is somewhat of a mystery. While the first pier was here in the early 1950s, no one seems to know for sure what year it was actually built or who owned it, though the story goes that the 617-foot pier was privately built. Back then, it was open 24/7, had a rickety boardwalk, an old beat up bait shack, was run haphazardly, and was quickly getting a reputation as a boisterous “beer pier.” Then in October of 1956, a thirty-year-old Mt. Vernon, New York, native by the name of Robert Jahn, who made his fortune in real estate, purchased the pier for $250,000. Joe Cass, a local known as “the-man-who-fished-all-day,” was hired as the pier’s manager.

Joe took down the beer signs and put up fishing signs. He built a restaurant, a new tackle shop that had all the markings of a Fifth Avenue store, and hired knowledgeable staff. But the pièce de résistance was his chum machine at the end of the pier. In it he threw hamburger, fish heads, and a mixture of oil and oatmeal. The slick brought fish to the pier by the hundreds and kept fishermen coming back.

A five-foot, 80-pound barracuda named “Sammy” lived under the pier. Joe considered him a “pet.” Then there was a one-day catch of 300 Spanish mackerel and a single afternoon when 150 three-pound bluefish were taken in. There was also the 500-pound female hammerhead shark that hung out at the end of the pier molesting the fish and ruining the fishing. It took Ralph Wickline three hours to reel in the darn thing that measured 11 feet and 10 inches. Just as he was about to beach the huge fish, she gave birth to thirteen 19-inch youngsters who immediately swam out to sea. Her words, “I’ll be back,” wafted on the breeze.

In September of 1960, hurricane Donna wiped out the pier, sending its planks floating north toward Boca Raton. Now without its icon, Deerfield residents and city commissioners proposed a bond issue to rebuild the pier. On August 1, 1963, the new 720-foot pier with his concrete pilings was dedicated. The first lessees were James Scarry and William Kahe. Unfortunately, there were unable to make a go of it. Four different parties subsequently leased the pier, all turning it back to the city as unprofitable. In 1968, Charlie Thompson, who people said didn’t know a fish from a pelican, leased the pier. He also returned it to the city in 1971, then became its manager.

He moved pier income from red to black for the first time in 1972 with revenues of $74,955. No doubt this was accomplished by his personable and knowledgeable staff, fishing contests, special events including weddings, burials (people actually scattered ashes of their loved ones off the end of the pier!) and births (at least one that’s documented), and his ability to “sell” the pier as a primary tourist destination. Income rose steadily after that. In 1976, $128,318 was collected and in 1978, income rose to $170, 973. All with a $.50 admission for sightseers and $1.25 for fishing, along with annual passes. Income topped $248,400 in 1985, the last year Charlie published revenue statistics.

Charlie was proud of all his accomplishments, but the biggest thrill during his tenue at the pier was the 1976 visit by President Gerald Ford. When Charlie learned that the president would be coming through South Florida, he wrote him a letter inviting him to come to the Deerfield pier. Charlie was most surprised to find out the Commander in Chief would actually come. After 20 years managing the pier, Charlie retired in 1988.

One final story remains. It’s about the nun who fell off the pier. Though details about where and how are a bit sketchy, and Joe Cass never got her name, he said she was a good sport – “wet habit and all.”

Information and photographs for this article were provided by the Deerfield Beach Historical Society. 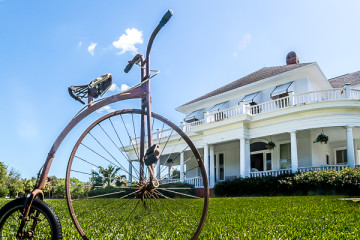