Lighthouse Point police officers, as well as the city’s firefighters, were dissatisfied because they currently pay 16.34 percent of their yearly wages to their pension plan, one of the highest rates in the state of Florida. In addition, earlier in the year, the actuary who manages the pension plan recommended the city increase their contribution rate to 21.26 percent.

The new deal – which takes effect October 1, 2018 and expires September 30, 2021 – will give police officers the option to switch to the Florida Retirement System (FRS), a move the city’s first responders had been requesting for over two years. Under the FRS plan, the contribution rate for first responders will be three percent. The city will contribute 23 percent, compared to the 22.27 percent it currently pays into its existing pension plan.

“From a financial point of view, I think this is a good deal for the city, the taxpayers and the employees,” said Chris Merk, one of the police department’s union representatives.

Once the process of moving to the FRS is complete, all new police officers will be enrolled in the FRS when they’re hired.

Before the new police contract was approved by the City Commission, police voted 15 to 1 in favor of it on Aug. 20. In July, a proposed contract was rejected by an overwhelming majority of police officers because it did not address several of their concerns.

After further negotiations, the city and police were able to resolve those issues, the most crucial of which involved a six-month cap on accruals of sick leave, annual leave, and compensatory time while on workers’ compensation. That period can now be extended, at the city’s discretion, for an additional six months in the case of a serious on-the-job injury, such as being shot in the line of duty.

Both parties also agreed on an increase in a yearly stipend that is offered to police officers in lieu of take home vehicles. The current stipend, which is $3,000 a year, will rise to $3,600 for the first year of the contract, and to $3,900 for the following two years.

Other provisions in the new contract include a cost of living increase of one percent in 2018 and 2019, and two percent in 2020.

In July, the city finalized a new contract with its firefighters after more than a year of negotiations.

The negotiation process for the three-year contract – which is retroactive to October 1, 2017 and expires September 30, 2020 – was prolonged due to the pension plan issues.

In the end, the city presented firefighters a contract almost identical to the one it offered police officers in terms of joining the FRS and other pension plan options.

The police officers were watching closely to see how things turned out for the firefighters. Four officers left the police department as a result of the pension plan problems, and a few others had job applications out elsewhere.

“Reaching this agreement was the result of very hard work on the part of the Police Benevolent Association and the city,” said Merk. “It was a lengthy process. I’m glad we can put it behind us and move forward as a department, retaining and hiring quality officers.” 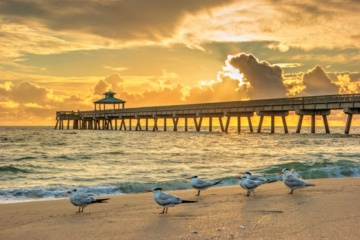