POMPANO BEACH OLD CLUB CINEMA SITE: The Planning and Zoning Board last Wednesday unanimously approved the site plan for a mixed-use project slated for a 6.2-acre site along North Federal Highway in Pompano Beach, just south of Shoppers Haven and the RaceTrac gas station on NE 33rd Street. Falcone Group, headquartered in Boca Raton, is the developer behind the project, called Sentosa, which consists of 285 rental apartments and 3,712 square feet of commercial space.

The project site, located at 3151-3251 N. Federal Highway, was previously occupied by a nightclub, called Club Cinema, and a strip shopping center.

Last year, the current property owner, 1307 South Wabash, LLC, demolished all the structures on the site, including the former Club Cinema building, which originally housed a movie theater.

There had been plans to build a Walmart Neighborhood Market on the site, but Walmart ultimately decided not to go through with the project.

According to the approved site plan, Sentosa will consist of two 7-story buildings adjacent to Federal Highway, each with 60 residential units. Each of the buildings will also have two 928-square-foot ground-floor commercial spaces fronting the highway.

A third building with 165 residential units will be adjacent to the Cresthaven neighborhood, which lies to the west of the project site. This U-shaped building will have seven stories, but the “ends” of the “U,” which will be closest to the neighborhood, will be four stories high. Amenities for the development will be located in this building, including a club room, full-service gym, yoga room, co-work space and an outdoor patio with a pool. The plans also include a pet spa and dog park.

In a previous version of the plans, the façade of the U-shaped building was a solid seven stories. At the request of Commissioner Rhonda Eaton of District 2, where the project site is located, as well as neighborhood residents, the building was redesigned to include an approximately 30-foot separation in the middle of the façade, from the third floor up, to allow air and light to flow through the building.

The project includes several surface parking areas with a total of 169 spaces. A 4-story parking garage with 279 spaces is proposed at the southwest corner of the property. In addition, seven spaces inside a detached garage at the southeast corner of the site, fronting Federal Highway, will be offered to residential tenants as an add-on rental item.

The project site is currently zoned as a business district, but the City’s zoning code allows multi-family development on the property with the allocation of “flexibility (flex) units.” The City Commission approved 285 flex units for the Sentosa project last week.

ANOTHER DEATH ON THE POMPANO BEACH RAILROAD TRACKS! 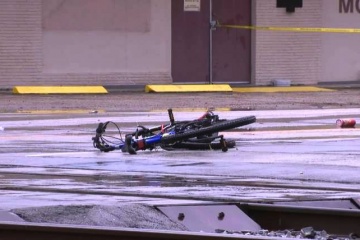