The pedestrian sidewalk on the south side of the Sample Road Bridge (located on Northeast 36th Street) is scheduled to close for emergency repairs starting on Monday, May 22. Pedestrian traffic over the bridge will be prohibited to ensure the public’s safety, and the bridge’s eastbound lane will be closed to vehicles.

“Due to the space constraints on the bridge, there was no way to set up safe provisions for pedestrians during the construction project,” said Lighthouse Point Public Works Director Charles Schramm.

A physical separation between traffic and pedestrians could not be installed because of the limitations. In addition, there is no sidewalk on the north side of 36th Street that pedestrians could use as an alternative.

During the repair work, which is expected to be completed by June 7, the eastbound vehicle lane will be closed from about 8am to 6pm, with flaggers on duty to direct traffic. The eastbound lane will be reopened for vehicle travel after working hours each day, and no work is scheduled for the weekend or the Memorial Day holiday.

The upcoming repairs are a result of a routine field inspection carried out by City staff. It was discovered that the pedestrian walkway portion of the bridge was sagging because stormwater runoff had caused erosion under the sidewalk. The bridge superstructure for vehicle travel is safe, as the pedestrian walkway is a separate but adjoining structure.

The repair work will involve removing portions of the existing sidewalk, stabilizing and reinforcing the ground underneath with new pilings, and reconstructing the sidewalk. A street light that was also affected by the stormwater runoff will be removed. After its base is realigned, the street light will be reinstalled.

The cost of the repairs is currently estimated at $71,869, which will come from the City’s Infrastructure Fund. This amount is likely to change once construction gets under way and exact quantities of the required materials are known.

Ahead of the repair work on the pedestrian walkway, the sections of 36th Street just east and west of the bridge were repaved in order to smooth out bumps that had been worsening.

The Sample Road Bridge is the only access into the Lake Placid area, which is essentially an island. According to the Florida Department of Transportation, the bridge is traveled by vehicles on average more than 14,000 times per day.

Another Successful year for Broward Habitat for Humanity CEO Build 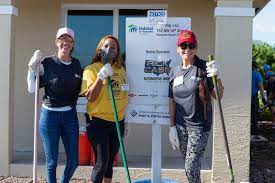