The Pompano Beach Community Redevelopment Agency (CRA) is getting closer to creating a public plaza in Old Town that will be used as a gathering place for the Old Town Untapped craft brew and arts event held on the first Friday of every month. It will also serve as an outdoor dining area for new restaurants that are being attracted to the space, including a hip “Southern comfort” restaurant concept that will occupy the building at 165 NE First Avenue.

Construction of the approximately 15,000-square-foot pedestrian and dining plaza, which is being called “The Backyard,” is anticipated to begin in January 2020, and should take about nine months to complete, said CRA Director Nguyen Tran.

“Old Town is developing into an arts, culture and entertainment district, and The Backyard plays a vital role in helping with this transition,” said Tran.

The city’s Architectural Appearance Committee, at its Sept. 23 meeting, approved a design plan for the new paver brick plaza. The plan includes remodeling the facades of the building at 165 NE First Avenue, which will be occupied by the new restaurant, and the addition of three strategically placed air-conditioned dumpster enclosures in the plaza area to accommodate the anticipated active uses.

The existing ficus tree, which is a prominent feature of the plaza, has been incorporated into the design. A live oak tree that is currently on the grounds of the historic McNab House (which will be relocated to McNab Park next January) will be replanted in the plaza to complement the ficus tree.

The project still needs to go through the site plan approval process, and to be put out to bid.

The new restaurant, tentatively named Wood & Wire, is anticipated to open in about a year, according to Mike Linder, who along with business partner Mitch Amsterdam, is creating the venue. The duo, which is leasing the 3,600-square-foot restaurant space from the CRA, will carry out substantial renovations, including an entire interior buildout.

Linder, who grew up in Pompano Beach, said he was excited to have the opportunity to open the first restaurant in the Old Town project.

“It’s really going to change the dynamics of that area,” said Danovich.

The CRA has plans to lease two other spaces in Old Town to restaurants. One space is located at 11 NE First Street, in what was formerly a laundromat, and the other is at 44 NE First Street.

In addition, the owner of the historic building at 61 NE 1st Street, which housed Pompano’s first bank in the 1920s, has plans to carry out renovations and use the space as a restaurant. Outdoor seating for the restaurant would be to the north of the building in an area called “Artists Alley,” which is known for its colorful murals. 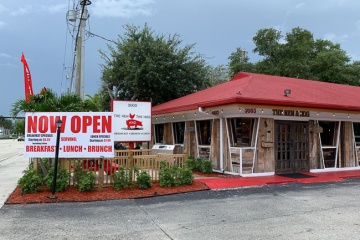