The two-story townhome project has been fully approved and the developer, Adam Adache, is awaiting building permits from the City, which he hopes will be finalized by the end of September.

Construction of the townhomes is anticipated to start immediately after the building permits are issued, and should take about 12 to 14 months to complete, said Adache, who is managing partner of Cavache Properties, which has offices in Pompano Beach and Fort Lauderdale.

It will be the first new construction of townhomes in Lighthouse Point in over 10 years.

Two buildings with six townhomes each will be built on the site, which is just under one acre, and has the address of 3870 NE 22nd Way. The site has stood vacant for approximately six years.

The townhomes will range in size from 2,040 square feet to 2,465 square feet of air conditioned space, with three- and four-bedroom floor plans. They are currently priced at about $850,000 (interior units) to $1 million (corner units).

Sales and marketing of the townhomes began about two months ago, and three of the units have already been reserved under written contract by residents from Parkland, Lauderdale-By-The-Sea and Pompano Beach.

“We expect close to half of our sales to come from Lighthouse Point,” said Adache.

Adache said he has spoken to a number of Lighthouse Point residents who have expressed interest. Some of them have lived in large homes on the water for many years and want to downsize, such as empty-nesters, but they love Lighthouse Point and don’t want to leave.

In June 2018, the city’s Planning and Zoning Board approved the site plan for the project, which included a ground floor patio area with a splash pool for each townhome unit. Last month, the Board approved the developer’s request to amend the site plan and allow three other options that buyers can choose from for the patio area if they don’t want a splash pool: a decorative lighted fountain, a small fish pond with a waterfall or a fire pit.

Each unit will also have a private two-car garage. In addition, there will be four guest parking spaces inside the property, and five on-street parking spaces along NE 22nd Way.

The name of the residences – “SeKai” – is of Japanese origin, and means “New World.” Adache said the name fits the innovative design of the townhomes, which is a combination of “contemporary and organic.”

In Lighthouse Point, contemporary is nice, but most people aren’t looking for ultra-contemporary, said Adache, so a lot of earthy colors and components were added, making the design a little more “transitional,” which is new to the area, and so far, has been well-received.

“We are very excited about this project,” said Adache. “It’s located in a highly desirable neighborhood and is currently the only new approved townhome development in the City of Lighthouse Point. We look forward to delivering a high-quality development and are proud to be a new addition to this beautiful city.”

This story was prepared by our Lighthouse Point news desk with additional information from various public sources and their websites. 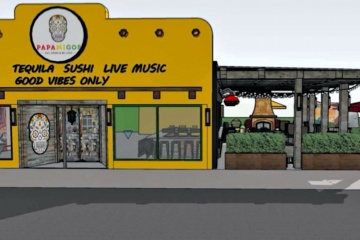