The excitement grew as 5:00 pm rolled around on Saturday, April 6th. Seven tables were being set, some
wilder creations than others. But you could tell it was going to be a wild and colorful evening!

Sylvia Knight’s group did an outstanding job of table decorating and apropos costumes to coordinate with the
theme of “50 Shades of Gray” — not really sure who played the role of Christian, but there were many
contenders.

Just coincidentally: Sue Nelson’s table did a fantastic job
of foreseeing the next series of the best-selling E. L. James
books with their theme of “Shades of Gray Years Later.” All
their “Christians” looked incredibly well-preserved for their
age. On the menu was Sex on the Beach Cocktails and
Better than Sex Chocolate Pudding!

The final best use of theme was Kim Hill’s redneck group
called “Moonshiners and Hillbillies,” complete with a
moonshine still and a game of horseshoes played with
toilet seats.

The Best Food Theme was awarded to the Linda Bunn
group with a backyard barbeque called Road Kill on the
menu of exotic food items served.

Amy Patterson’s College Day’s Group was back for the
fourth year in a row, progressing from freshman year to
this year’s Spring Break. With this group, senior year and/or
graduation may still be a few years away. They all definitely
excelled in Jenga, Beer Pong, and Corn Hole. Are those
areas where they confer degrees?

Getting the award for Best Dance Moves— a large
group of over 30, practiced and dressed the part for
Gangnam Style dance entertainment throughout the
night, until they were advised that threats were levied
against the band if they played “Sexy Lady” one more time.
Earl Maucker was a standout performer!

Finally, a special award was given to the world Famous
Low Tides band and Joe Balistreri’s outstanding sound
system for providing the great dance music.

Dinner Under The Stars has been an annual April event
for the last seven years and is open to all LHP Residents.
Give John Trudel (Rec Director) a call at
954 784-3439 if interested in next year’s event.

OUR VISIT TO CUBA! 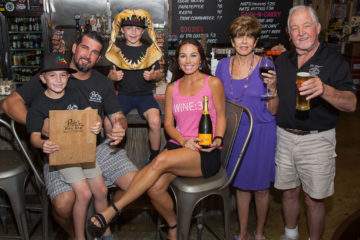