Two of Deerfield’s own Island Water Sports’ team surfers have made the cut for the U.S. Olympic Developmental Surf Team, which aims to prepare young surfers for future Olympic games.

For the first time in history, surfing will be a part of the 2020 Olympics in Tokyo, Japan. After several failed attempts to make surfing an Olympic sport, the International Surfing Association (ISA) succeeded. On August 3, 2016, the International Olympic Committee (IOC) confirmed surfing will be in the 2020 games. As a result, the ISA has started grooming young surfers across the nation for future Olympic competitions, including those in Paris is 2024 and Los Angeles in 2028. The Olympic Developmental team consists of surfers born in 2004 or 2005 who would most likely compete in Paris or Los Angeles.Only 19 surfers across the nation made the cut, and two of them are from Deerfield’s own Island Water Sports (IWS) surf team.

Sterling Makish and Ava McGowan have been sponsored by IWS since around the first grade. The two 12-year-old, blonde-haired “groms” and childhood friends have done well on the competitive surf scene and both recently surfed in the invite-only USA Surfing Championships in San Clemente, Calif. at Lower Trestles Beach. It was there that Joey Buran, the US Olympic Developmental Team coach and scout, was watching.

“He was watching every single heat,” said Steve Makish, Sterling’s dad. “He was really paying attention, looking for whatever they look for as a coach.”

At the end of the competition, the Olympic Developmental team was announced. While Sterling had made the championship semi-finals and been given a heads-up that he would be making the team, Ava and her family were completely surprised by the announcement.

“I didn’t even think that she was going to be considered because she didn’t make the final at the championship,” said Heather McGowan, Ava’s mom. “It was pretty incredible… to be chosen and to know that all of our efforts and hard work paid off. I cried.”

Both Ava and Sterling now have the opportunity to train with Buran, who is the former national Head Coach for the USA Surf Team and has coached pro teams in Chile and Great Britain. Buran told his new team members that over the next year he is hoping to have at least one training day per month, plus a couple two- to four-day training camps in Southern California. Buran also hopes to have guest athletes from other countries join the team for training.

Sterling and Ava are two of six who made the team from the east coast. The other 13 members are from the west coast. In the championships, they surfed against surfers from both coasts and Hawaii.

“There is the incredible reality that some of you might actually be competing for Team USA in pursuit of Olympic Gold in the sport of surfing,” Buran wrote in a letter to the team members. “This team is USA Surfing’s entry-level first step toward that ultimate goal.”

Linsey Cottrell, co-owner of IWS, has watched Ava and Sterling progress over the last six years. Both Sterling and Ava started surfing at the age of six. They bonded in kindergarten while in the waves, surfing with their dads. It became quickly apparent the two had talent.

“As soon as they were able to get into their own waves, they were trying new turns,” said Cottrell. “Some kids would take their time to figure out their balance and flow, but these kids immediately started doing turns.”

Both have been on the IWS team roster ever since. IWS helps sponsor kids in the competitive surf scene, which can get expensive for families. By representing IWS, the kids get the support they need while serving as brand ambassadors for the Deerfield Beach retail store. While both Ava and Sterling are “extremely talented surfers,” Cottrell said she thinks Buran probably also recognized them for their good attitudes, work ethic and team spirit.

“They have that combo that you really need to excel,” said Cottrell. “It’s that thing you look for in kids — that energy, the attitude they bring to the whole sport. They’re not just there to be super competitive. They do it because they really love it. Sterling is levelheaded. He’s well spoken. He’s respectful. He’s just a really humble dude who’s there to go surfing. With Ava, it’s the same sort of thing. They’re both humble and grateful kids.”

Sterling is entering seventh grade at Somerset Key Academy in Deerfield Beach, while Ava is homeschooled from New Smyrna Beach where her family re-located three years ago to make it easier for her to surf every day. Though continuing to live in Deerfield Beach can be seen as disadvantage for Sterling, Steve said it also motivates. The Makish family travels to New Smyrna almost every weekend and takes trips to California, Costa Rica, Puerto Rico and other surf hubs. The surf-travel lifestyle has become the “norm.”

For both the Makishes and the McGowans, surfing has become a centrifugal force requiring family dedication.

“It’s not just Ava. Ava puts in the physical work but we all put in work for support and make sacrifices as a family,” said Heather.

Making the Olympic Developmental Team has served as validation.

“It’s been a really long journey to get here. You don’t really realize it until things like this happen.” said Steve. “We’re going for the ride and we’re shooting for the stars.” 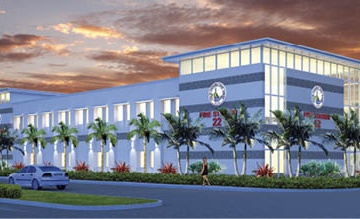