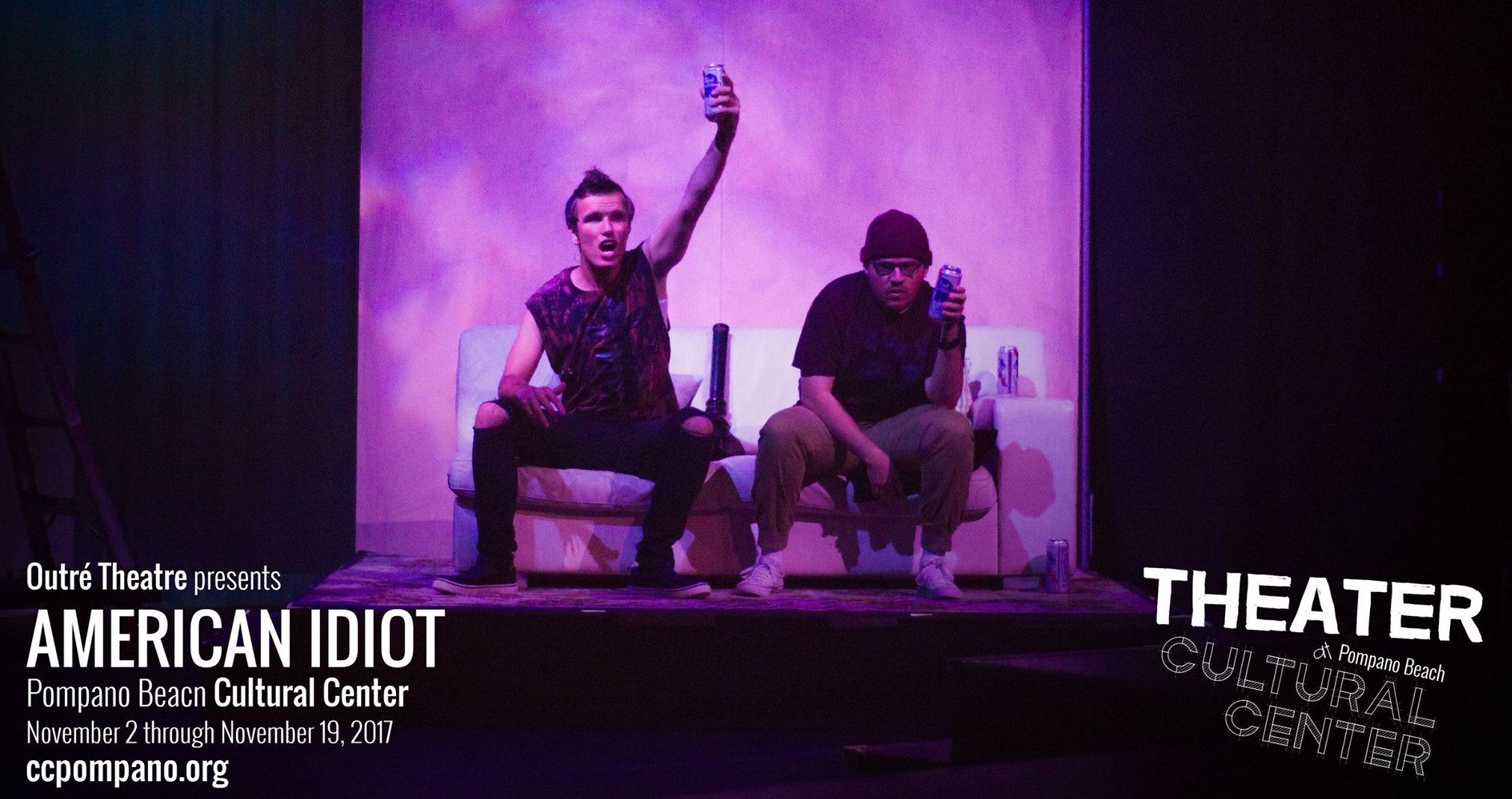 Billie Joe Armstrong’s “American Idiot,” a musical which opened at the Pompano Cultural Center on November 2 and is scheduled to run through November 19, is many things: a best-selling rock record, a concept album, a punk-opera, an epic, a polemic, a stage musical.

The album version of “American Idiot” garnered accolades from critics when it was released in 2004 at the height of Bush-era politics to a post-9/11 America newly at war on terror — and the album’s rancorous political commentary, its depiction of the nation’s suburban enclaves as arrested by simple apathy, resonated with teenagers.

In light of recent historical events, in politics and in all public life, many of those complaints seem now quaint. But before the first iPhone, when hardly anyone sent text messages, kids wandered about before and after school “on a steady diet of / soda pop and Ritalin,” muttering perhaps to themselves or at one another or both “at the center of the earth / in the parking lot / of the 7-11 where I was taught / that the motto was just a lie.” The motto being that of the United States of America, of course.

The play premiered in Berkeley in 2009, at the Berkeley Repertory Theater, before making its appearance on Broadway in 2010, at the St. James Theatre in New York City. Pompano’s new resident theater troupe Outré — a youthful cadre of mostly local thespians fresh from their MFA programs — has now taken it on under the managing direction of David Wetzel.

“In this time of ‘fake news,’ heightened racial tension, gun violence, nuclear tensions, name calling and lies, who do we believe?” Wetzel says in a press release. “Although American Idiot is set in the time of the Iraq War and circumstances have evolved, it is as poignant today as when it premiered on Broadway. The more things change, the more they stay the same.”

In its theatrical incarnation, “American Idiot” is more than anything about symbols, patterns, archetypes — it is, on the whole, an allegory of growing up absurd in America, the existential drag of becoming an adult. The play begins with an overture from the production’s titular number which an on-stage band puts to music; the band’s players are cordoned off together on a small platform, house-left, where they have fashioned themselves like a chamber orchestra, and somewhat remind one of a Greek Chorus.

Opposite the band are a couch framed in a halo of familiar-seeming detritus, signifying wasted youth — bongs, emptied cans of Pabst Blue Ribbon, scattered and tread upon. It is meant to be motley, like overgrown children stomping through, which is almost exactly what happens. The couch remains constant throughout the play, a symbol around which the lives of the characters position themselves — there on the couch they lounge, argue, drink, weep, pray to God that their lives someday make sense.

Between the couch and the orchestra and behind the cast — of whom we are introduced to the principal characters: Johnny, Tunny, and Will — there is a screen of flashing images spliced together of sequences from commercials, movies, TV shows, news reels, documentary footage, stills of photographs, anything that could rightly be filed under the rubric of “media”: “Don’t wanna be an American idiot / Don’t want a nation under the new media / And can’t you hear the sound of hysteria / The subliminal mind-fuck America.”

With this the play dates itself — although not irreparably — as accurate media coverage has become now more than ever essential for the successful joining of people, events, music, art, facts, together in a kind of canonical memory. In many ways, however, the play does advocate for, and promotes, the idea of preserving shared historical memories.

Some mise-en-scène is established: backdrops featuring a 7-11 parking lot, with a banner advertising sausage biscuits for 99 cents, and a residential neighborhood; when the characters embark on their epic, there is a long highway scene with a distant view toward a city skyline. These images recur as Johnny makes his pilgrim’s progress through the stations of his life. He philanders his way through an unnamed city, which is assumed to be someplace like New York City, some anonymous metropolitan hub where young imports can lose themselves, where he finds similarly dissolute friends, drugs, and a hooker girlfriend whom he calls Whatsername, and with whom he discovers an alter-ego named St. Jimmy after shooting heroin for the first time on a rumpled mattress.

As Johnny finds himself down and out, and in a desolate place, Will and Tunny experience their own variations on spiraling and sadness. Will becomes one of those recalcitrant alcoholic fathers, the dead-beat dad you hear about. Tunny goes to war in Iraq hoping that being a soldier will give him a sense of purpose only to lose a limb and fall ultimately deeper into a cracked mental state, and after suffering PTSD-induced delusions he winds up in a hospital with Will and Johnny. As Johnny travels from his childhood home to the big city, and back again to his hometown, we bear witness to his evolution from shiftless profligate youth to what we are meant to suppose will turn out for him to be a new kind of calm — a civil, more dignified middle stage of life.

There is a very striking snapshot of a suburban street which recurs behind the actors on the screen at the beginning and at the end of the play, an image of a neighborhood, houses all in a row, that is just devastating. The image is a bleak, flat capture of suburbia in the afternoon, with a view toward the middle distance of a cul-de-sac, as if gazing through the window shield of a car advancing down the street, or at an image from Google Maps.

Johnny finds home — a major theme of the play is getting back to childhood and the search for the possibility of home — and after he reunites with his old cohort, he discovers that they have all dealt with their own incursions of the outer limit in some form or another: breakdown, burnout, war, addiction, at least one severed limb, other traumas. Also: businesses, babies, marriages, and somehow lives have taken place. Eventually, inevitably, as a matter of course, they grow up. 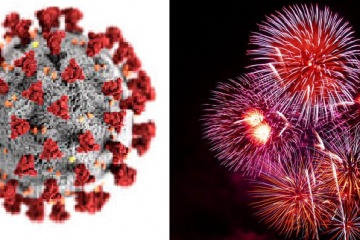