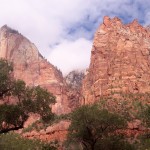 Article and photos by Joan McIver

Editor’s note: Joan McIver is a resident of Lighthouse Point and wife of Stu McIver, world-renown author of 13 books and 500 magazine articles, as well as numerous documentary films. Joan was writer for the Miami Herald and Forum newspapers.

The natives are friendly. The air is clear and the mountains kiss the sky. A road trip into the vast American West welcomes visitors with spectacular visions of painted deserts, deep canyons and towering red rock cliffs.

In mid-September, my daughter Jan Hammett and I embarked on a two week western drive to six national parks, two state parks and other exciting landmarks along the way. Our circular 1860-mile route led from Las Vegas, through southern Utah and a corner of Arizona.

Along the way we visited Zion Canyon, Bryce, Capitol Reef, Arches and Canyonlands National Parks in Utah. While we were in the area we added on a visit to the north rim of the Grand Canyon in Arizona.  It may sound hectic but we had ample time to take a jet boat ride on the Colorado River; pick apples in a desert oasis, walk through a dark and twisting slot canyon.

I am a senior citizen and a resident of Florida for more than 50 years. Jan lives in South Carolina and is a working woman with two grown children. Despite the generational gap, we make a perfect road trip team: Jan loves to drive and I love to ride. At the Las Vegas airport we rented a Ford Focus then spent the night in the Flamingo Hotel, a garden spot along the sparkling neon strip. 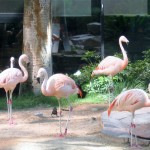 The next morning we left the flat desert town behind and headed for the hills of Southern Utah. A 90-mile drive on Interstate 15 brought us to St. George, a pleasant mid-size city not too far from our first destination – Zion National Park.

Our adventure began in Zion National Park where peaks of rose and gold-tinted Navajo sandstone soar 2,000 feet above a valley carved by the relentless flow of the Virgin River. For centuries, the canyon was farmed by Native Americans and later in the 19th century by pioneering Mormons.  They called it Zion – a place of sanctuary.

Easy and moderate trails weave in and out along the river while more difficult, back country hikes climb upward onto the craggy, cliff side lairs of pronghorn sheep, elusive mountain lions, marmots and other critters.

We peered upward but saw only big black ravens as we walked along a river pathway where cottonwood and ash trees provided some shade from the blazing sun. This trail led to the Narrows where canyon walls hug the shallow river forcing hikers to wade in the water to continue onward. The Narrows appeared an easy and inviting walk, but slippery rocks and a flowing current require a walking stick and hiking boots. Alas, we had neither, so we sat nearby on some rocks and envied well-equipped hikers splashing through the cool, muddy water. 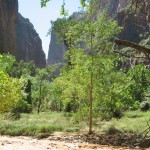 As one of the ten most popular national parks, Zion was packed with Europeans, Asians, Americans and serious backpackers of all nationalities. Between April and October, visitors to the main entrance must park and ride shuttle buses that run regularly through the park. The  shuttles stop at trail heads and picnic sites. As they move along, the drivers tell about the history, geology, wildlife and other park information. Throughout the day, we hopped on and off the shuttle to take pictures and walk. I am not used to uphill climbs or rugged hiking but many of the trails in Zion are gentle and some are even wheel-chair accessible.

Zion’s majestic peaks were so enchanting we explored the area for two days from our base in St. George. Nestled in a mountain valley, this city boasts a broad choice of motels,  restaurants, grocery, book an dart stores. But we did most of our shopping for gifts and souvenirs in Zion’s visitor center where the shelves are well-stocked with books, maps, post cards, tee shirts and hiking gear. I bought a hiking stick that can be adjusted for walking or even to fit into a suitcase. At a snack bar next to the park lodge, we sat on a bench and dined on hamburgers and ice cream cones. Even as we ate our simple lunch surrounded by majestic peaks, we wondered what other area could match Zion’s spectacular beauty.

Then we drove to Bryce Canyon National Park where Mother Nature staged another big show. The hour and half trip to Bryce Canyon took us through a mile-long tunnel, carved over 80 years ago beneath Zion’s rugged backcountry.  As we exited the tunnel, we had our first wildlife sighting–a small antlered goat munched roadside weeds without any concern for the slowing cars and the click-click of tourist cameras.

At Bryce we hopped aboard the park shuttle and rode to the Inspiration Point for a breathtaking view. Rows and rows of orange, pink and yellow spires and pinnacles marched almost to the horizon below the overlook’s 8600-foot elevation. Known as hoodoos, the bizarre formations shaped by eons of geological forces appear like sculpted statues. We wanted to go down and walk among them but the trails looked too steep and daunting for inexperienced hikers like Jan and I.  Instead we hiked the rim trail that edged high above the magical jumble of hoodoos. Bryce Canyon is a relatively small national park, so after our morning-long walk and exploration, we were able to head to our next destination—Capitol Reef National Park.

What a drive! Utah’s Scenic Bi way 12 slices through the million acre Grand Staircase Escalante National Monument, a unique terrain formed by a series of cliffs rising from the Grand Canyon to the rim of Bryce Canyon. The ever-twisting road rises from 5,233 to 9,636 feet. At almost every turn, the land below us changed from pink and yellow desert dotted with mesas to emerald green patches of green farmland interspersed with tiny villages. The two-lane road continued up onto an alpine mountaintop forested with blue spruce, pines and aspens. A family of deer scampered in the cool shade. After reaching its high point, the road spiraled downward. We came to the town of Torrey where we spent the night in view of the long red, ridge-like formation of Capitol Reef National Park. 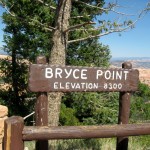 After a quick breakfast and a stop to buy picnic supplies, it only took a few minutes to reach the uncrowded park that counts about 700,000 visitors annually. It is special for having mammoth, domelike formations and a stretch of reef-like cliffs known as a waterfold pocket that reveals how the earth’s crust was built, folded and then eroded.

Capitol Reef’s miles of mountain and desert trails promised adventure. But Jan and I were more drawn to the green pastures and a thriving apple orchard in Fruita, a pioneer homestead preserved in the park. Despite its desert locale, the farm land is watered by the Fremont River that winds through the valley.

We visited the old home of the pioneer Griffin family and then turned our attention to the apple orchard with its ripe apples and pears available for the picking. At $1 a pound, we couldn’t turn down such a deal? We had fun shaking the trees and filling two bags with fruit. We weighed and paid for them on the honor system. After picnicking in the park’s a shady grove we turned our wheels eastward to bustling Moab, UT, about three hours distant. So far we had logged visits to three nation parks. Would the next three be as amazing?

(Look for Part 2 of Westward Ho by Joan McIver in our March issue!) 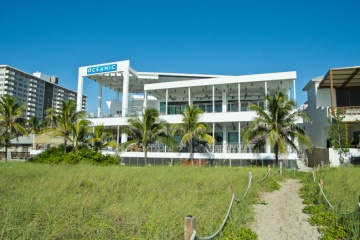