AN EDUCATIONAL
MARINE PARK IS COMING
TO THE HILLSBORO INLET

The shallow protected waters adjacent to the Hillsboro Inlet Park are in the process of becoming the site of an interactive underwater marine park called Wahoo Bay. Its purpose is to raise awareness, especially among youth, of the importance of keeping oceans and reefs healthy and thriving in an entertaining, educational way.

Shipwreck Park, a not-for-profit organization, is behind the Wahoo Bay project, working in collaboration with the City of Pompano Beach, Broward County and several educational institutions.

The City owns the Hillsboro Inlet Park and acquired the submerged lands where Wahoo Bay will be located in December 2019.

“We are establishing a mini-marine sanctuary right in Pompano, in northern Broward County,” said Rob Wyre, chairman of Shipwreck Park. “There are no other projects of this type in the area.”

According to its mission statement, Shipwreck Park is dedicated to the creation of an underwater park system establishing artificial reefs, and using public art to raise awareness of the need to preserve and conserve the natural coral reef system.

Shipwreck Park sank two vessels off the coast of Pompano Beach — the Lady Luck tanker in 2016 and the Okinawa, a U.S. Army Corps of Engineers tugboat, in 2017 — to create an artificial reef system.

Wahoo Bay “is really the education component of our mission,” said Wyre.

The idea for the project originated in 2017 as a result of a strategic planning session that was held after the sinking of the Lady Luck, said Wyre.

“We realized that deploying artificial reefs was good for the environment,” said Wyre. “It attracted a lot of attention, but it was really only visible to divers and fishermen.”

“We came to the conclusion that one of the best things we could do moving forward would be to concentrate on education and raising the awareness of the general public about the importance of artificial reefs, natural reefs and what’s going on in our world in terms of sea rise and resiliency,” said Wyre.

Wahoo Bay will have a particular focus on educating youth “because they are the ones that are inheriting this world,” said Wyre. The marine park will be a place where students can come on scheduled field trips to have an underwater educational experience.

The target group is students in grades K-12.

“We want to get them involved at an early age to make sure they understand how important the underwater habitat is to our everyday life, from the reef system to our shorelines, to the mangroves that create a first line of resiliency,” said Tom DiGiorgio, chairman of the Economic Development Council of Pompano Beach, and a board member of Shipwreck Park.

Creation of the marine park includes installation of an innovative modular shoreline protection system, called SEAHIVE, which was developed by the University of Miami.

The plan for SEAHIVE at Wahoo Bay is to construct six, 20-foot-long modules in the water along the existing seawall. Each module would consist of 36 perforated hexagonal tubes, with mangroves planted on top, providing an eco-friendly environment for marine life. The SEAHIVE will also protect infrastructure and the environment from flooding, erosion and impact from waves. The SEAHIVE elements, made with seawater concrete and non-corrosive reinforcements, allow water flow under surging or breaking waves, dissipating the wave energy within the elements.

The SEAHIVE at Wahoo Bay will be one of the University of Miami’s first applications of the system.

Experts from the University of Miami will help with the planting of the mangroves in the SEAHIVE, and will study their performance.

Mangroves are a vital component of the estuarine environment in South Florida and will play an ecological role in the establishment of a fish nursery at Wahoo Bay. 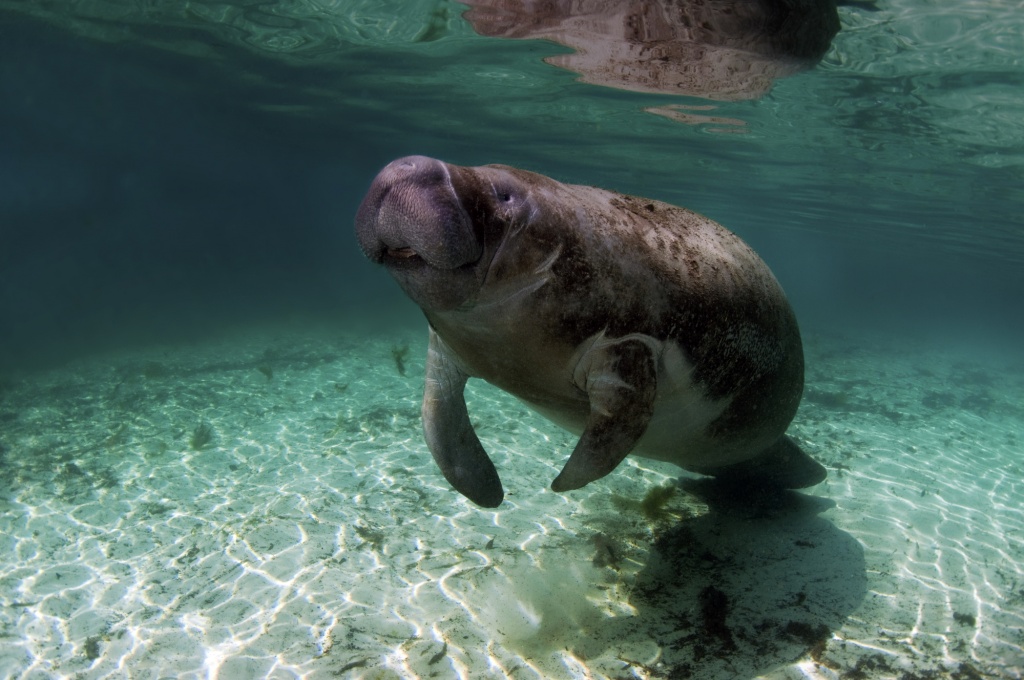 “Very few folks can dive deeper than 70 feet, or even down to 120 feet where Lady Luck is,” said DiGiorgio. “We thought it was important to create a shallow-water experience, and the Hillsboro Inlet seemed like a perfect spot for us to do that.”

In March, the City of Pompano Beach enacted an ordinance establishing the site of the Wahoo Bay project as a swim-only area. No jet skis, motorized boat traffic or anchoring will be allowed, to ensure protection of marine habitat and a safe public snorkel zone, which will be delineated by water marker buoys.

The depth of the water in the swim-only area is six feet at its lowest point and roughly 12 feet at its highest, with a few spots further out that run a bit deeper.

Within the boundary of Wahoo Bay is a patch of Johnson’s seagrass, an endangered marine plant species. This seagrass is now protected from further disturbance by jet skis, props and anchors with the enactment of the swim-only ordinance.

To make certain that Wahoo Bay is a safe area to swim, studies were conducted related to the currents, and the results were favorable, said Wyre.

There will be several ways to experience Wahoo Bay, said Wyre. Visitors who frequent the Hillsboro Inlet Park will be able to view it without even getting wet by standing along the seawall and looking down.

Another way is immersive, by entering the water from outside the boundary of the swim area, which will be cordoned off, or from a regulated swim platform, which will be built next to the existing dock at the Hillsboro Inlet Park. 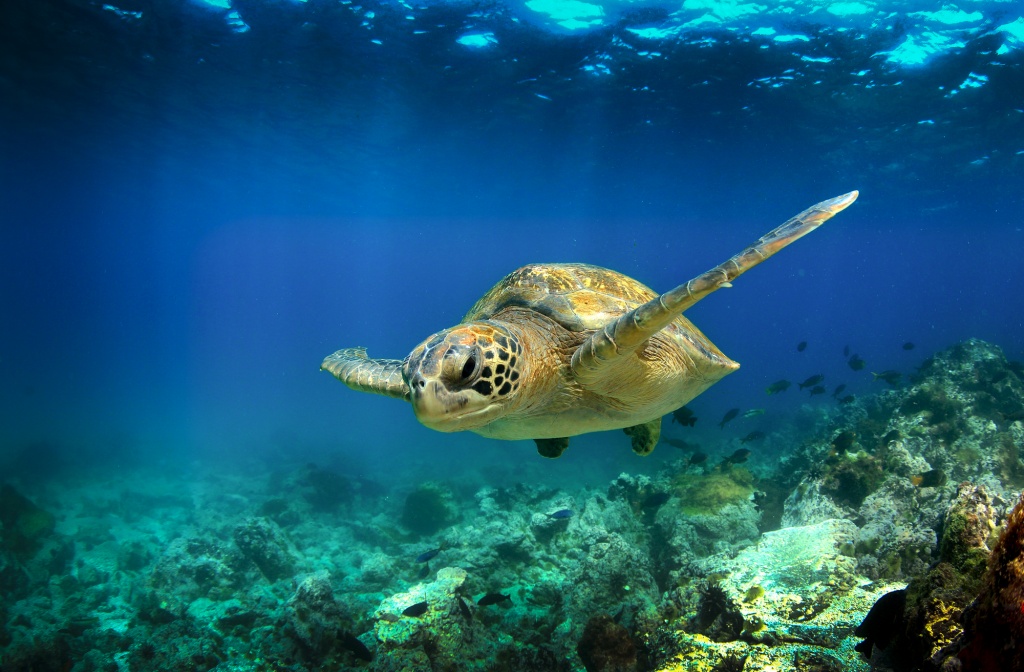 For supervised, scheduled school field trips, an age-appropriate educational curriculum will be developed so students can discuss what they see at the marine park, as well as real-world marine issues. The hope is to build the curriculum with the help of the University of Miami and local instructors who live in Pompano Beach.

Students, teachers and families will also be able to experience Wahoo Bay virtually. The marine sanctuary will be equipped with live action underwater cameras, weather devices and water quality monitoring systems for collecting data, which will be uploaded for analysis to the Wahoo Bay website, currently under development. The data will allow changes at Wahoo Bay to be tracked over time. The website will include a marine science and educational curriculum.

WAHOO BAY FROM ABOVE 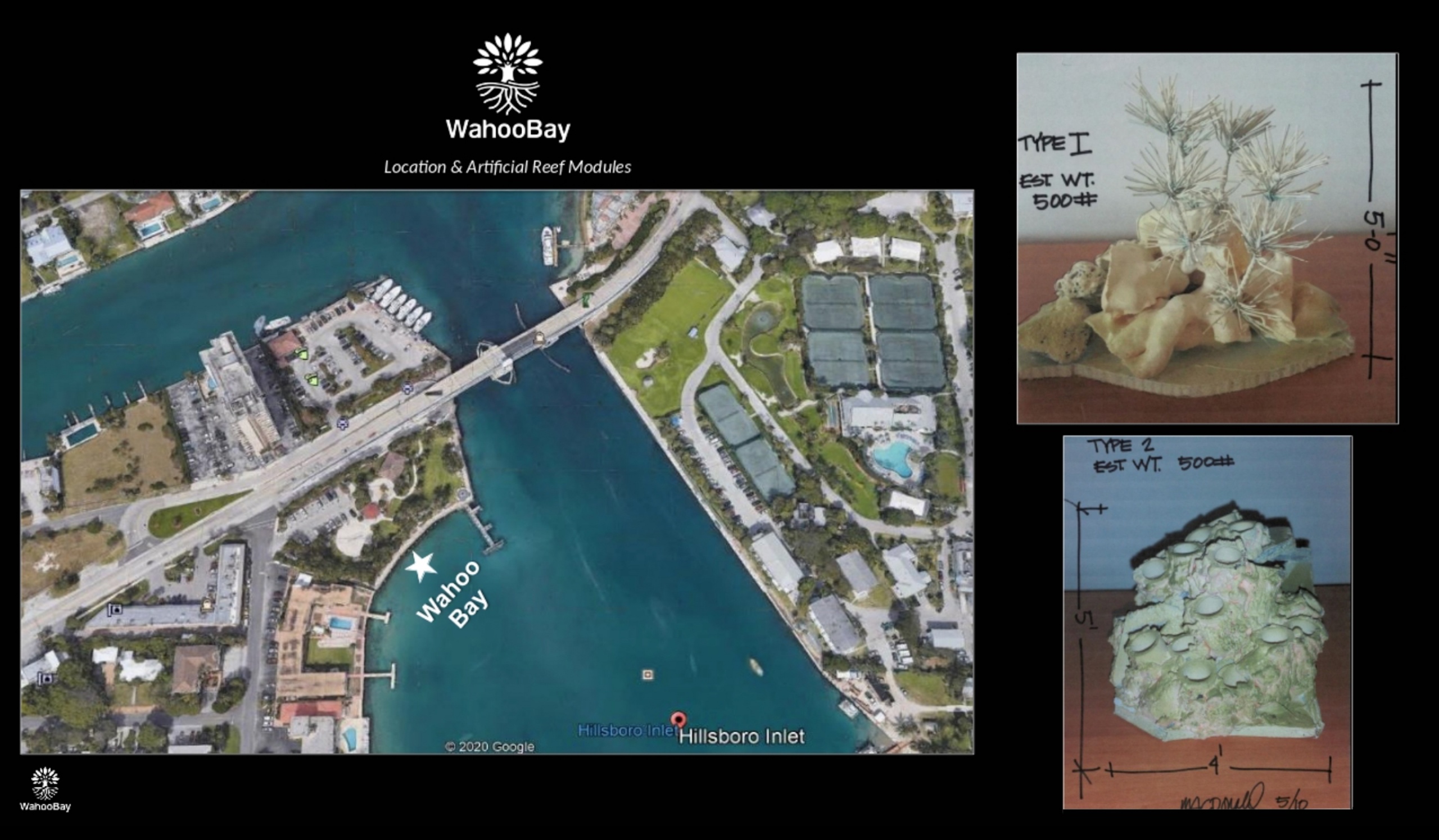 The maps above and below show the area within the Hillsboro Inlet that will become the new interactive underwater marine park Wahoo Bay. Plans include a new swim platform, mangroves and a new SEAHIVE system (see sidebar). Above right: Two concept designs of the artificial reef modules.

The Wahoo Bay project includes plans to deploy a number of artificial reef modules, possibly 14, which measure two feet to four feet in diameter. These reef modules will be pieces of underwater public art that are “very unique in structure” and “will be fun to take your picture with,” said DiGiorgio.

“Public art is always a big part of what we do to raise awareness,” said DiGiorgio.

The reef modules will be designed in a way that encourages coral growth and marine life habitat. In addition, underwater public art will be attached to the six SEAHIVE components. 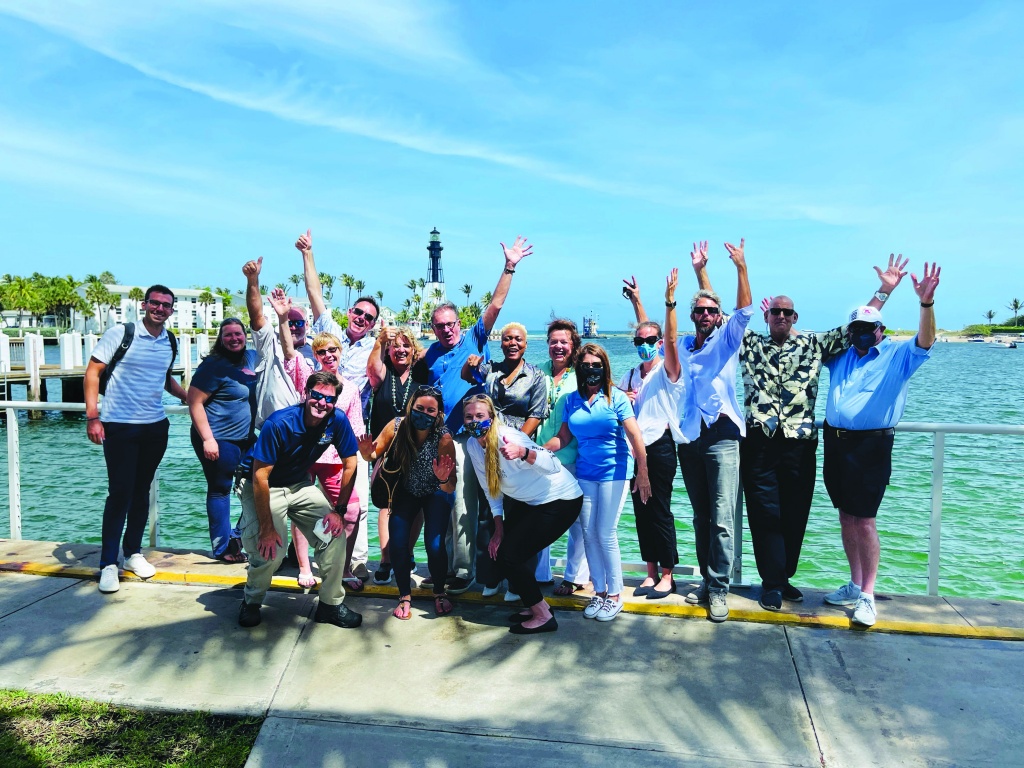 How Much Will the Project Cost?

How soon construction can begin on Wahoo Bay is dependent on being able to raise the funds necessary to install the SEAHIVE and build the swim platform.

“We hope to have our permits for the swim platform and buoys this summer, but as far as a completion date, we’re not that far along yet to make that prediction,” said Wyre.

The Wahoo Bay project will be carried out in several phases. The first phase — which includes the swim platform, the SEAHIVE, the buoys to protect the swim area, and some of the data collection – is estimated to cost approximately $600,000.

The next phase will involve putting the artwork in the water, followed by installing all the monitoring systems for long-term data collection, establishing the virtual curriculum, and, depending on the availability of funding, adding some educational components on land, such as interactive educational displays. All of this could cost roughly another $600,000.

“We have some serious fundraising to do,” said Wyre.

Where Will the Funding Come From?

Broward County recently obtained a $50,000 grant from the Florida Fish and Wildlife Conservation Commission (FWC) on behalf of the Wahoo Bay project. The County was awarded the grant because the FWC “is very interested in seeing how the SEAHIVE system will work,” said Wyre.

On behalf of the City of Pompano Beach and Shipwreck Park, the University of Miami has applied for a $200,000 grant from the Sea Grant program, which the University of Florida administers. If the grant application is successful, the money would be used for the deployment of the SEAHIVE at the Wahoo Bay shoreline.

Other funding for the project is expected to come from private donations.

“We’re going to have to lean on the private sector to help us get this thing funded,” said Wyre,

“just like we did with the deployment of both the Lady Luck and the Okinawa.”

In addition to donations from private individuals, corporate sponsorships will be sought with companies that share Shipwreck Park’s mission of conservation through education.

Once Wahoo Bay is established, there will be ongoing expenses, such as providing life safety for the people physically visiting the park, and maintaining the underwater cameras and sampling devices. 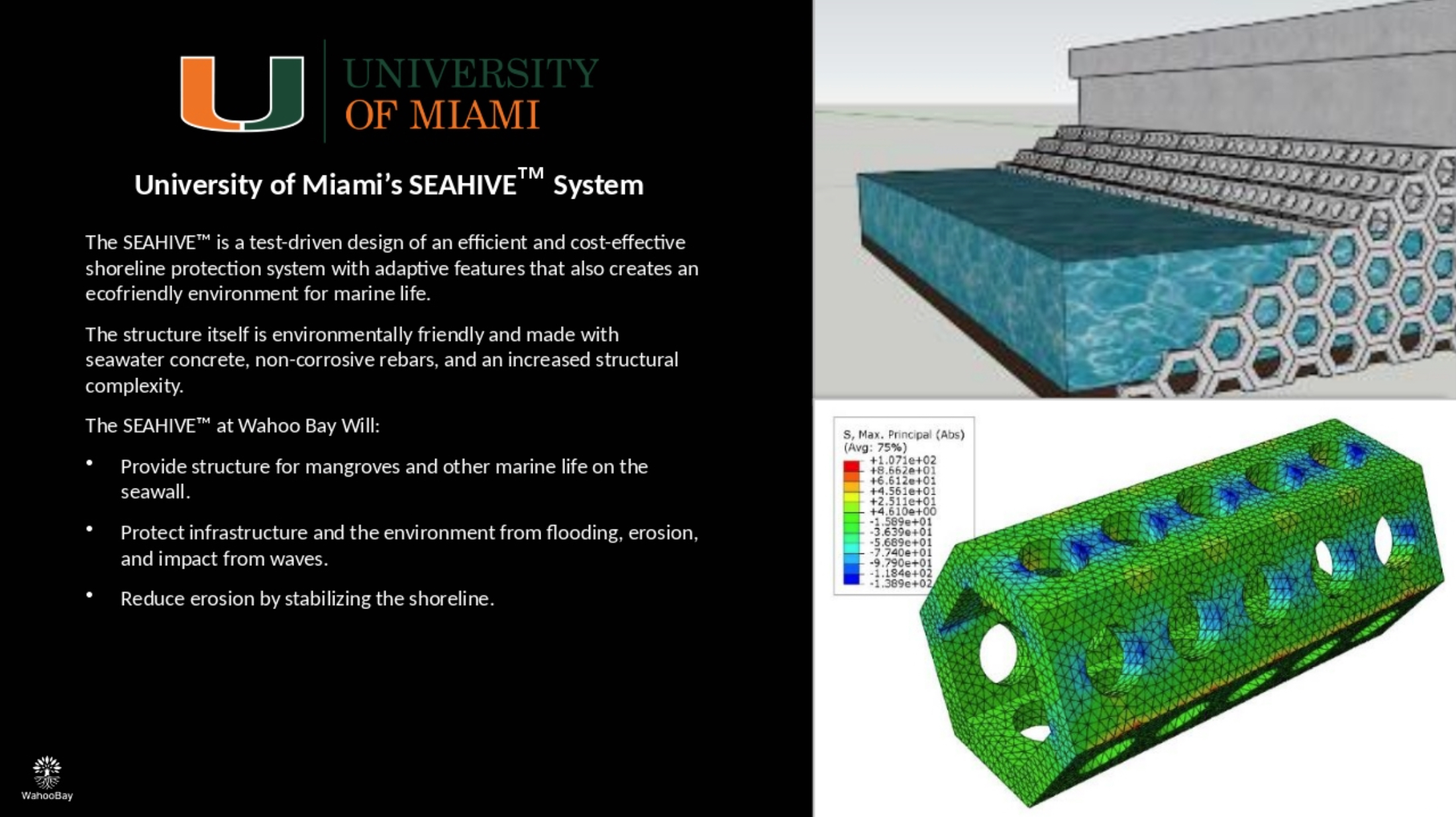 It is hoped that once the Wahoo Bay site is developed and fully vetted, the concept of the in-water experience can be replicated in other locations throughout Florida, the country and the world.

As for the virtual content that is being created, “we hope it reaches the masses throughout the globe, not just here in Broward County, which is fantastic on its own,” said DiGiorgio.

Partnerships have already been established with the Guy Harvey Ocean Foundation and the MarineLab education center in Key Largo. The two organizations will be collaborating with Wahoo Bay to deploy similar underwater data collection devices and cameras at two sites — one in the Kissimmee River, where Guy Harvey has a location, and one in the Largo Sound.

DiGiorgio and Wyre highlighted the public-private partnership that has been taking place to see the Wahoo Bay project through — with the public sector being the City of Pompano Beach and Broward County, and the private sector being the not-for-profit Shipwreck Park.

“It really is a model for how public-private should work together, and it’s been that way since Lady Luck and Okinawa,” said DiGiorgio. “These are real examples of what can happen with everybody working together and rowing the oars in the same direction.”

“I think what’s driving everyone’s interest in this, as well as the desire to participate, is that this is about the environment,” said Brian Donovan, assistant city manager of the City of Pompano Beach, and a board member of Shipwreck Park. “I think everybody recognizes how this project will help balance the ecosystem in our water and will raise awareness about it.”