From the outside, Devon and Joe’s new Mercedes Sprinter appears to be a plain (albeit shiny) white utility van, but slide open the side door and a whole impressive, HGTV-worthy home appears. Inside is Joe and Devon’s completely self-customized and self-built tiny house, which will be the couple’s home for about the next two years as they travel both North and South America. The young (Joe, 29; Devon, 25) Lighthouse Point couple will hit the road this summer in their tiny-home-on-wheels, traversing the country, driving, biking, hiking and going wherever the wind takes them. They have no schedule, nor specific routes planned, with the exception of attending a family wedding in Charleston, South Carolina and checking off a bucket list of national parks to see.

With how quickly the couple created their Tiny Home (in under three months from start to finish), one might think the couple had done some sort of renovation, house-flipping or construction work, but they haven’t. The Tiny House was their first stab at doing anything even remotely like it. Devon works as a waitress at Houston’s in Pompano Beach, while Joe works as a freelance engineer. The couple guesstimates they spent collectively over 1,000 hours online researching and teaching themselves how to build, insulate, wire, plumb, design and finish their home, which is replete with solar panels, a diesel hot-water heating system, induction stove, AC and DC current, zero-propane system and custom cabinetry.

While they are new to building, the free-spirited couple is no stranger to adventure. They have cycled across the country—down the East coast of Florida, across the southern part of the United States and up the West coast to Alaska. Yet, both of them were amateurs when they started. Joe was invited on his first cross-country cycle trip by a friend from Connecticut; he participated with no training whatsoever. His courageous quest inspired Devon to try one, also without any training. She had been a surfer from a young age, but had never embraced a life on the road. The charismatic couple took their first cycle trip together in September 2015, spending seven months on the road, living out of a tent. The couple shared that journey via an online blog and photo journal called lifeultralight.com.

If the couple were a brain, Devon is definitely the right side. She created an impressive coffee table book of her photos from their cross-country cycle as a Christmas present for her friends and family, but the book is so stunning it could easily pass as a professional publication. When it came to building the couple’s new home-on-wheels, Devon was remarkably creative. Not only did she design the custom cabinetry and create the architectural layout of the space (maximizing the usefulness of every nook and cranny), she actually tie-dyed the fabric on the pillows in denim shades, which she subsequently sewed and stuffed herself. She had never sewn anything before; That too, she taught herself. Her proudest detail of the tiny home: the kitchen bench cube that slides out, has storage inside and creates a detached seat for guests. The table she designed swivels and detaches, fitting perfectly in a storage space located underneath the mattress.

Joe, on the other hand, is most definitely the left brain of the couple. As a freelance electronic engineer, Joe figured out how to install solar panels on the roof of the van, which power a series of batteries neatly lined and built underneath one of the kitchen banquettes. The van has both AC and DC currents (as Joe explains: “Because DC current is actually much more efficient”). Joe even installed USB chargers in the walls. It was Joe’s idea to make the stove of the tiny house an induction range —meaning it never gets hot. Rather, he said “it excites the molecules of the pan to cook” giving off no heat in the tiny cabin of their new home. Like Devon, Joe taught himself nearly everything (with the help of YouTube and Home Depot) including how to cut and build the custom cabinetry. He swears “anyone could do it” (though he might have a certain propensity for things like electric wiring).

“They love us over there. We’re their new best friends,” joked Joe about Home Depot.

The couple’s passion for their mobile lifestyle is contagious, as is their go-getter determination. As they shared the story of how they fell in love with traveling and how they created their crafty little home, they excitedly talked over each other, finishing each other’s stories and bantering back and forth with an enthusiasm more invigorating than a double-shot of espresso.

“I could geek out all day on this stuff,” Joe said as he enthusiastically described all the gadgetry and mechanics.

The couple has been together for almost four years now and, after having lived together out of a tent on their cycle trip, see the tiny house as a step up. The mobile house will allow them to sightsee with more ease and comfort as they traverse the Americas. Devon plans on pursuing her photography on the road, while Joe will continue to work remotely. The couple says relatively speaking, living on the road is cheap. Plus, the couple will be renting out their Lighthouse Point home to subsidize the travel.

Devon and Joe hope to inspire others who might be considering an alternative lifestyle, but warns: “It’s addicting.”

If you’d rather live vicariously through them, Lighthouse Point magazine will post photos and stories on our Facebook page. Or, follow their entire journey in more detail online at lifeultralight.com, or on Instagram at @lifeultralight. 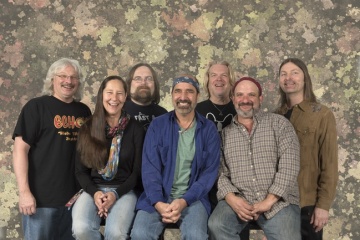