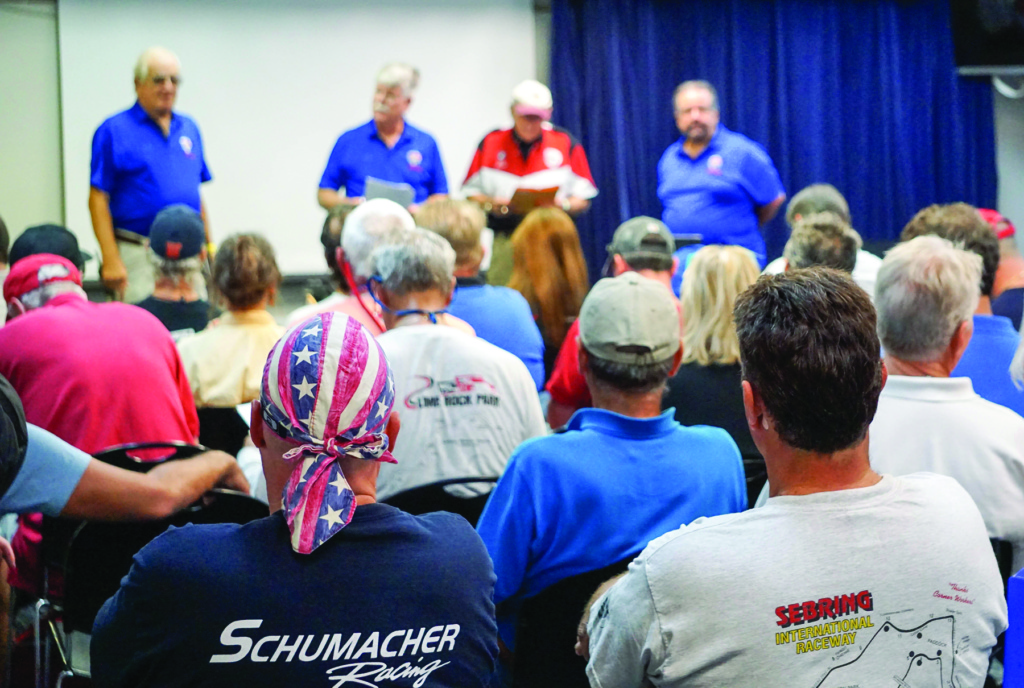 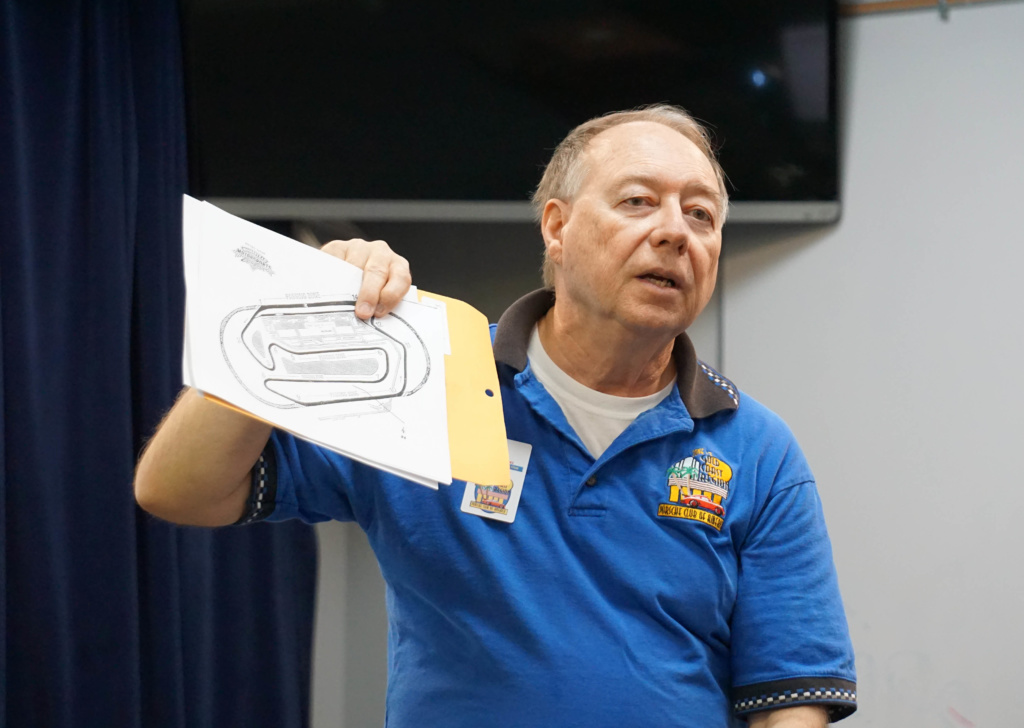 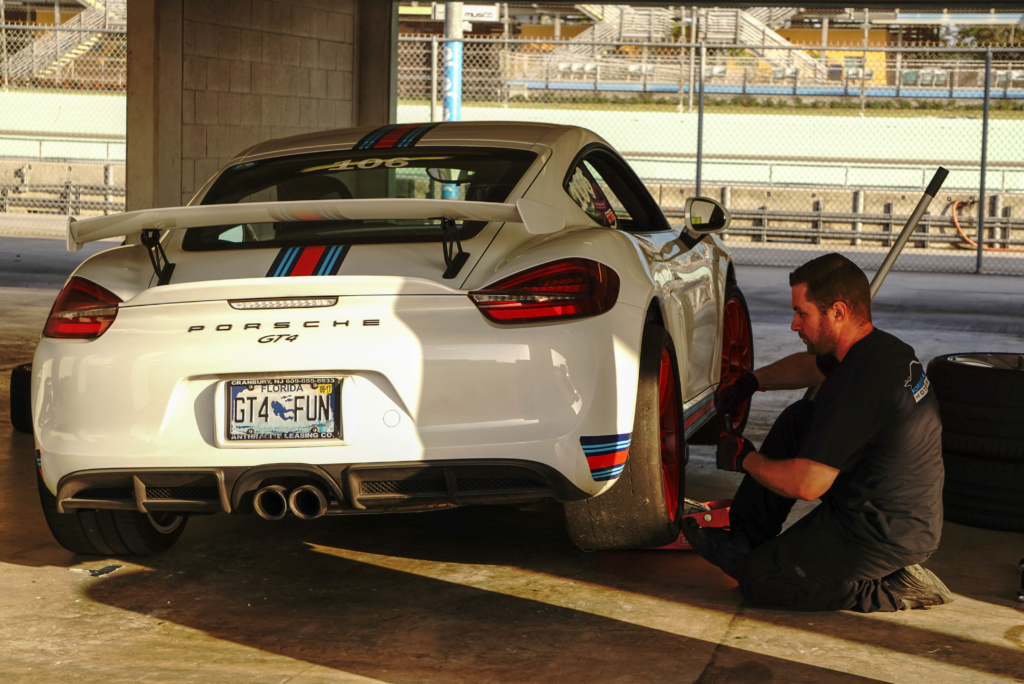 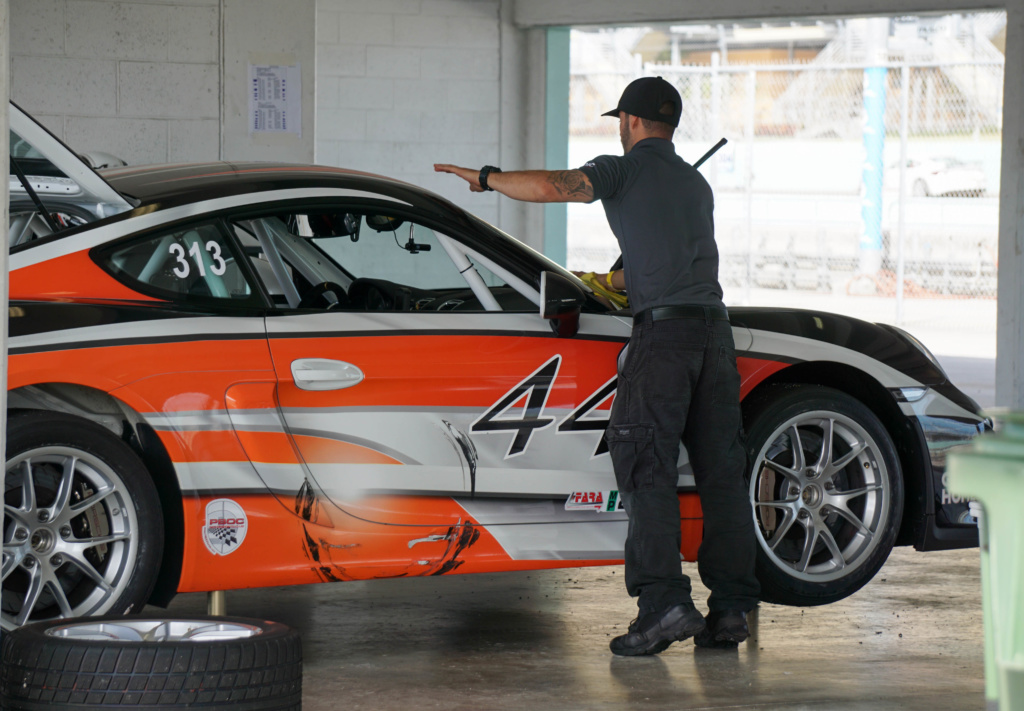 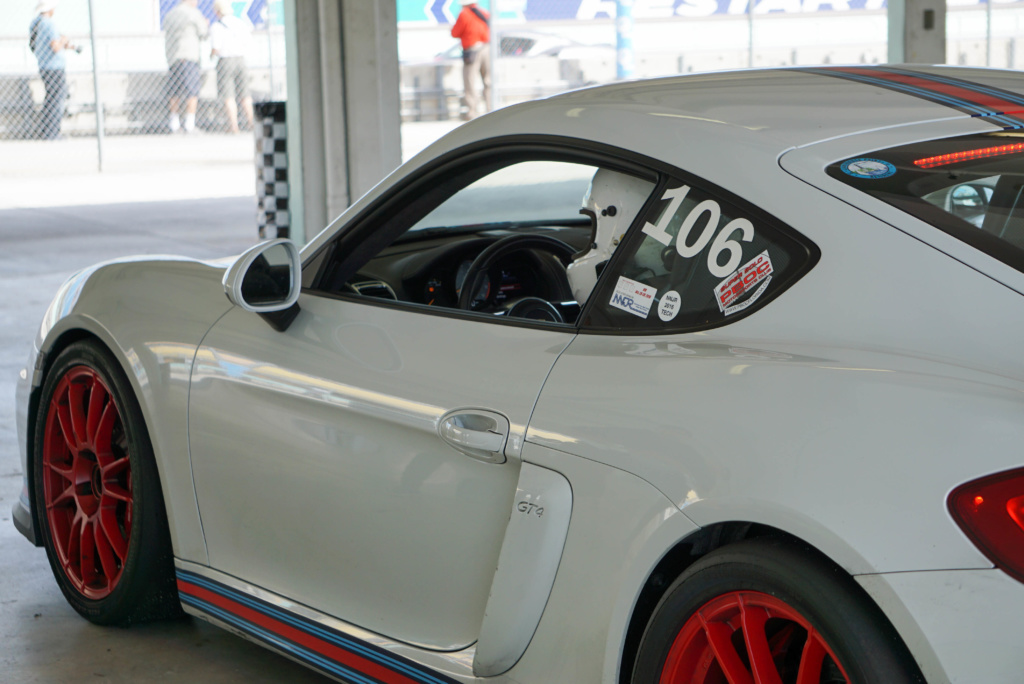 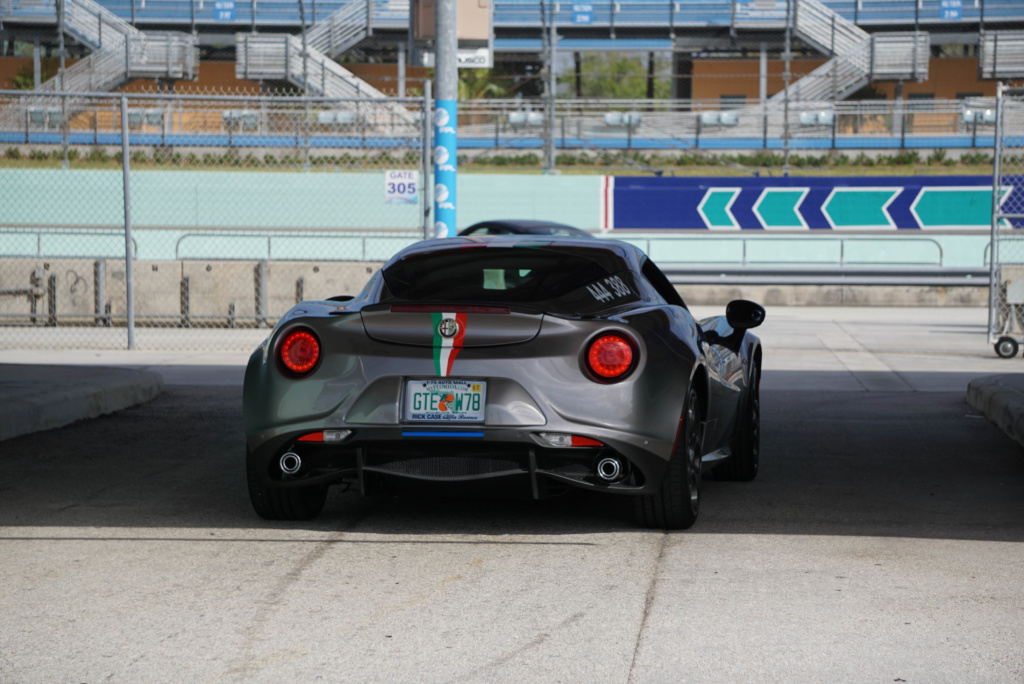 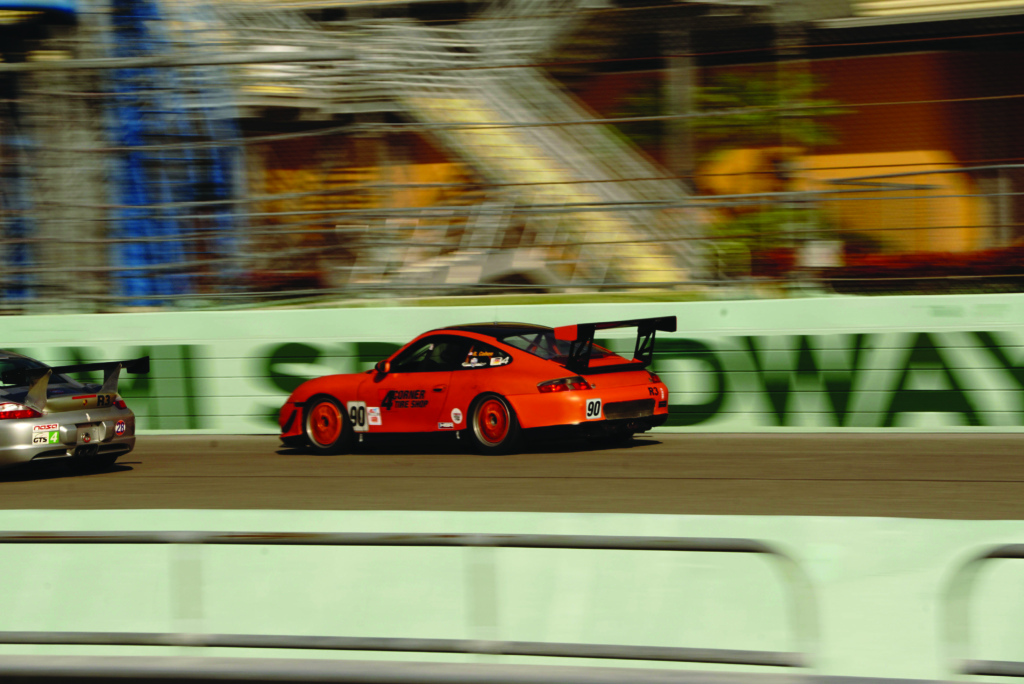 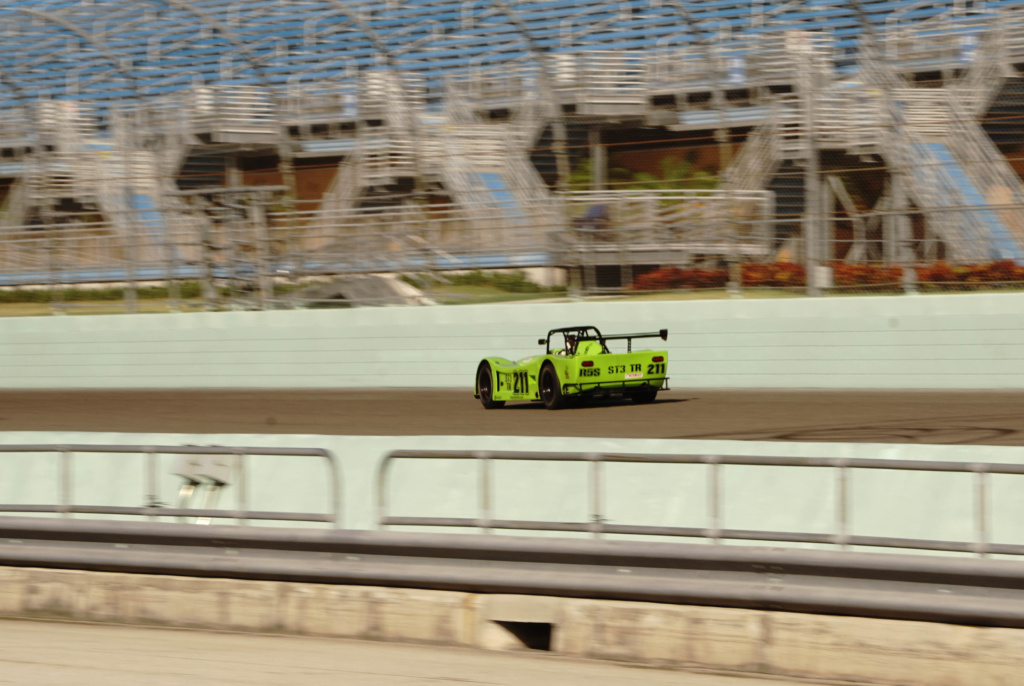 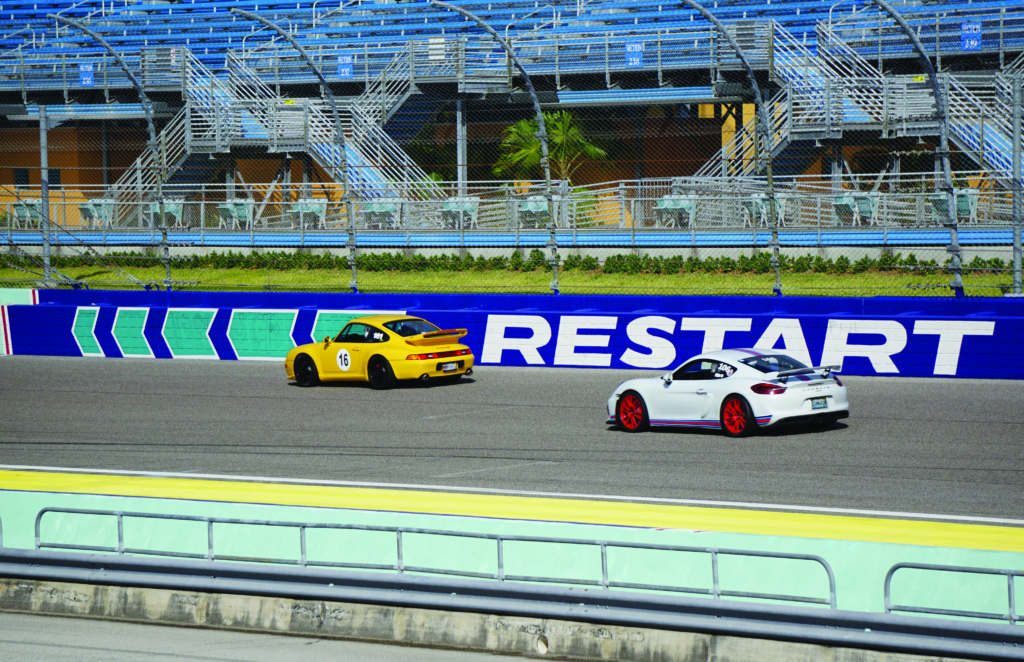 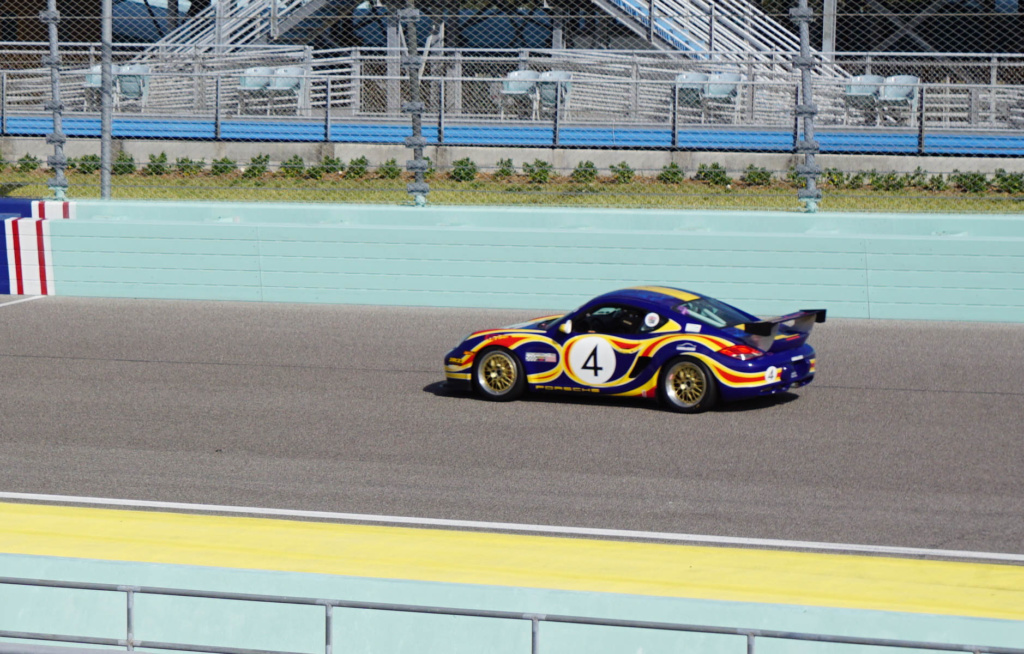 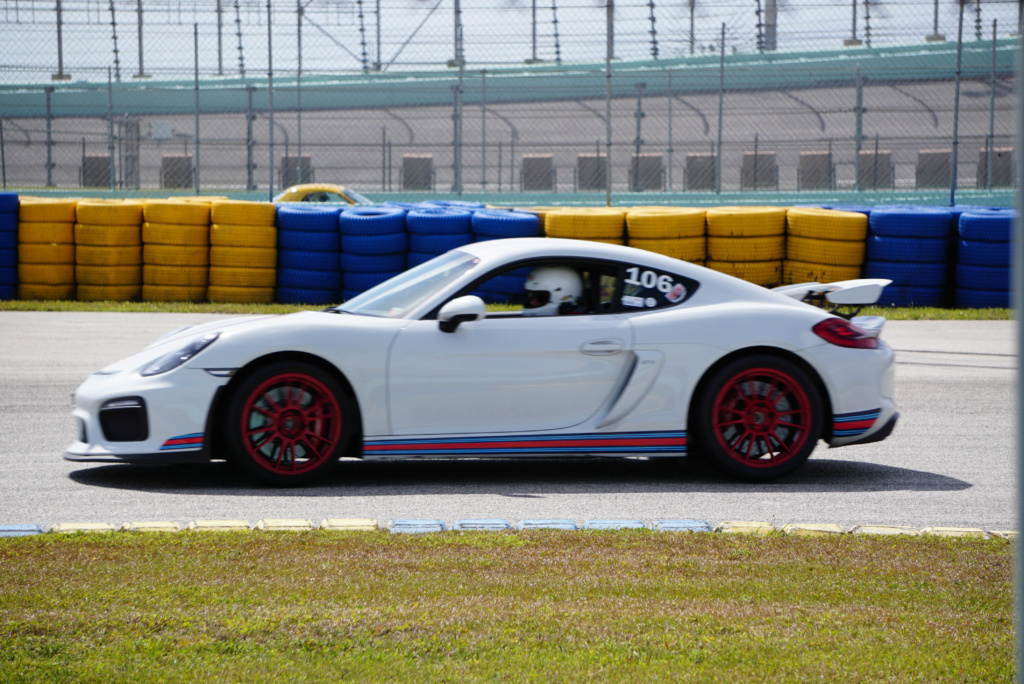 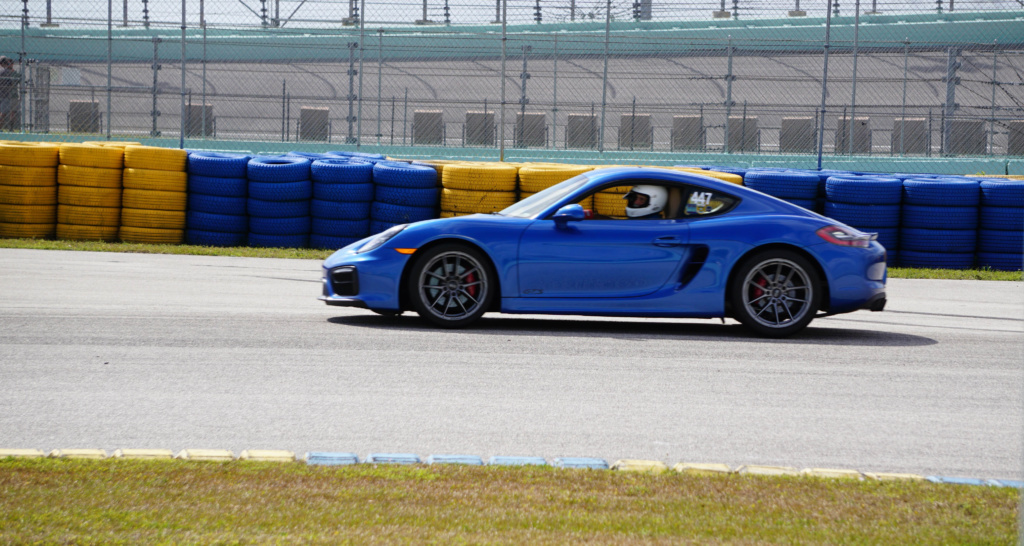 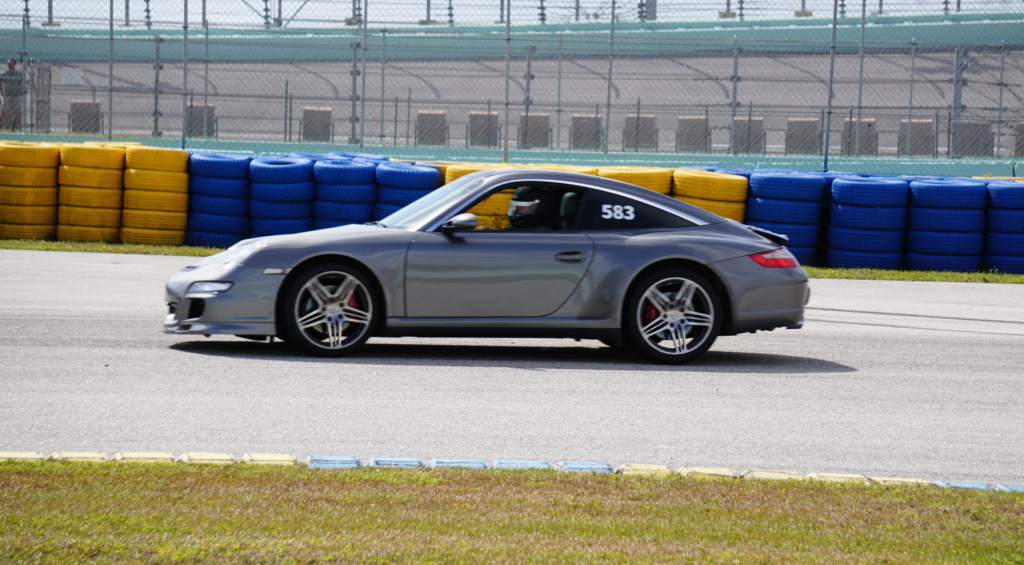 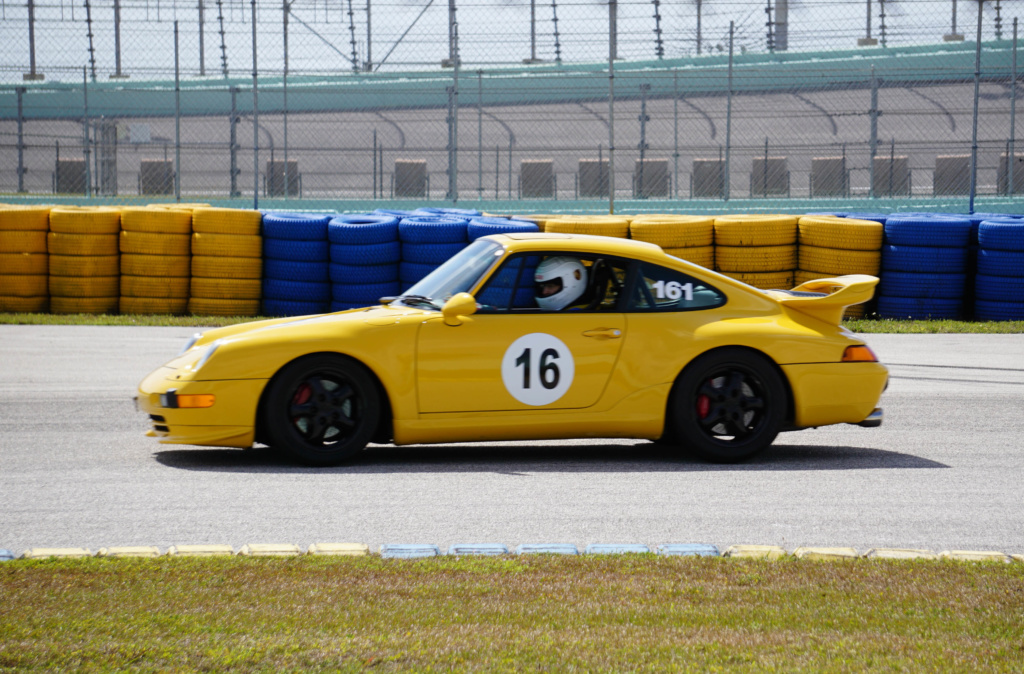 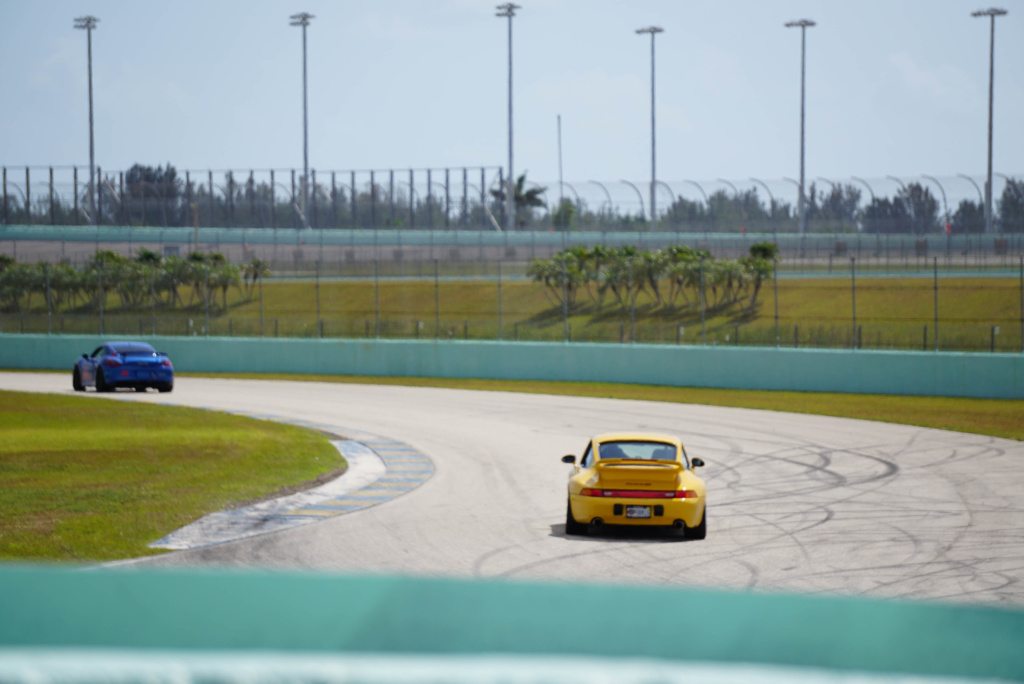 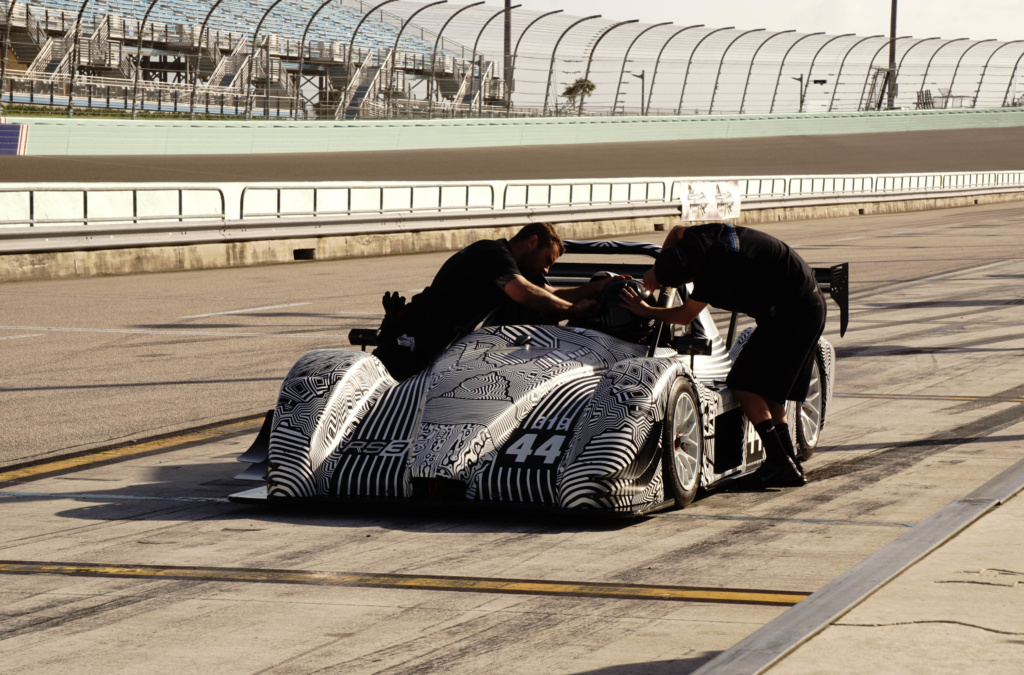 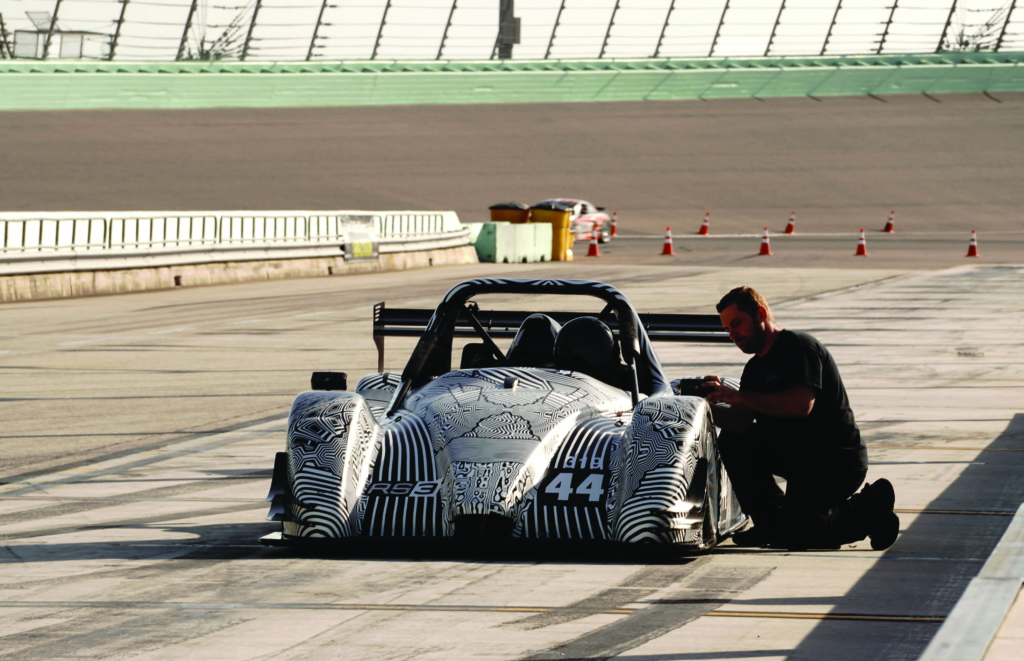 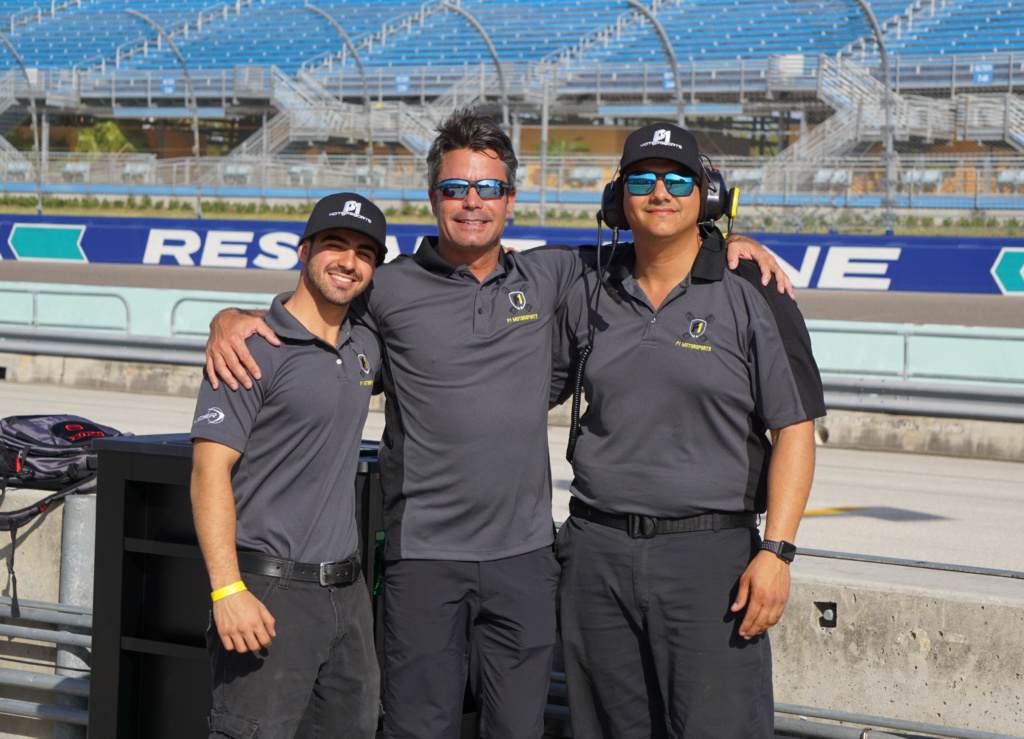 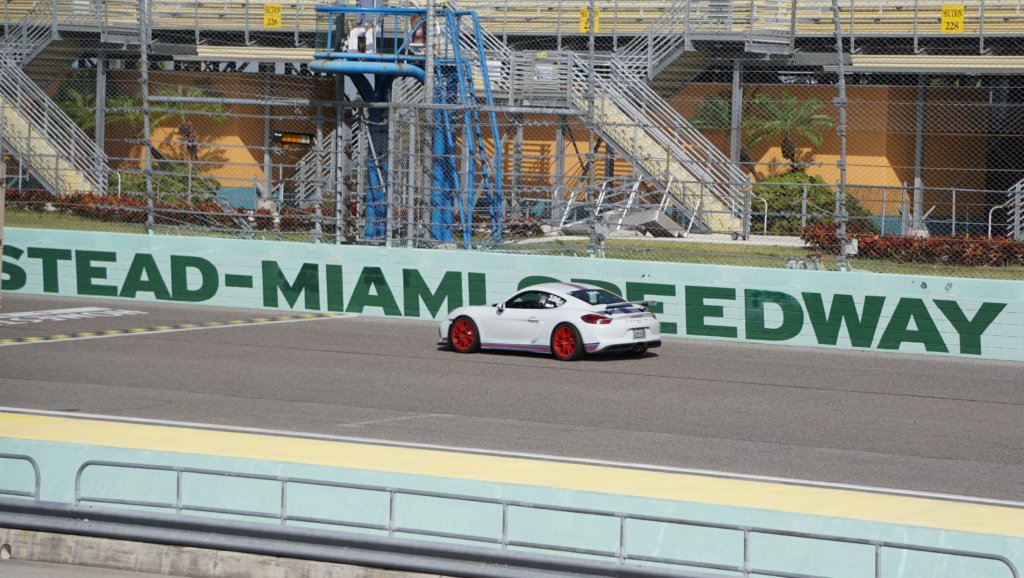 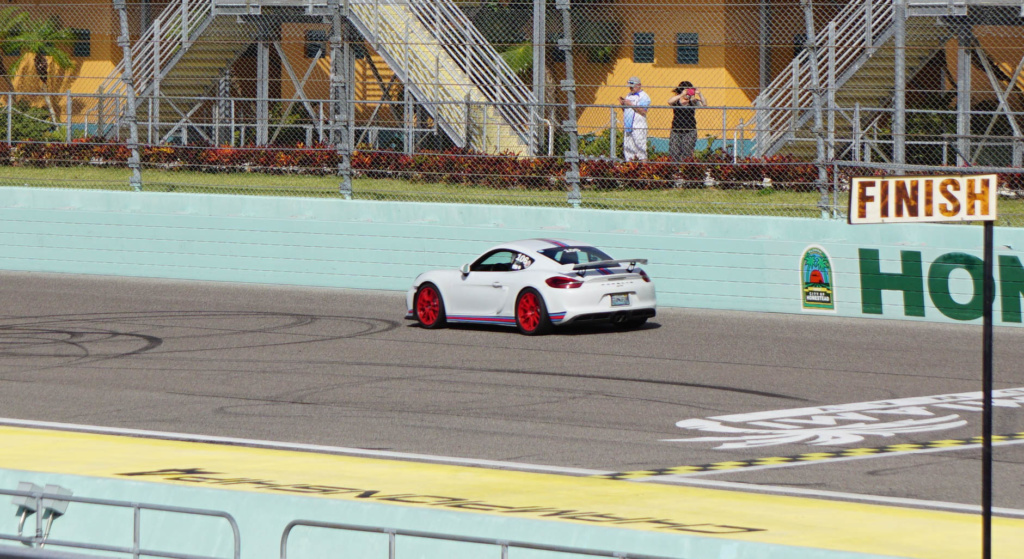 I could feel a wall of pressure on my chest as we launched down the straight of the Homestead-Miami Speedway in a Porsche GT4 like a jet taking off down a runway. I braced my heel on the floorboard as a jolt of adrenaline rushed up my spine and my back pressed firmly against the car’s bucket seat. I could feel the vibration of the track through my helmet and a buzz in my teeth as we whipped around corners, grazing the racing strips with each hairpin turn. As we came up tight behind the car in front of us, I gripped the door handle a little tighter and breathed deeply to fend off potential nausea.

The experience quickly felt surreal, as if we were merely players in an arcade game. This, however, was entirely real — a fact my mind strained to remind me of. I felt an exhilarating mixture of excitement, joy and fear. With each loop and launch of the track, my vision narrowed and my periphery blurred — a form of tunnel vision bad for drivers, dubbed the “Red Mist.” Luckily, I wasn’t driving. Instead I was the lucky passenger riding with Steve Feibus, a Lighthouse Point resident, senior Porsche Club national driving instructor, and member of the Gold Coast Porsche and BMW Owners Club (PBOC). The PBOC is an auto club that organizes events for new and advanced drivers to get experience driving their prized vehicles on professional racetracks. The club calls these events “Driver’s Education.”

For new club members (or in my case, honorary members), the event begins with a classroom session, which teaches the basics of racetrack rules, flag colors, the drive line, passing and other safety information. Following the classroom session, drivers are assigned an experienced instructor who accompanies them on the track and teaches them driving techniques, like when and how to accelerate, brake, turn, float or control the car.

“Some of these things can be somewhat counterintuitive,” said Feibus. “For example, on the turns. A lot of new people will brake when they should accelerate. Pressing the gas pulls the car down to the track so it doesn’t spin out.”

The PBOC hosts six similar “Driver’s Education” events at speedways throughout the year. The day I attended in March, the event was co-sponsored by the Porsche Club of America (PCA). Renting the track can get expensive, so co-sponsoring events with other auto clubs is a good way to network and be fiscally smart. The March event gathered 76 student drivers and 10 Super Solo drivers. Super Solo members are drivers who have gained enough experience, instruction and vetting to go on the track solo, which usually takes a year or two.

“Until an instructor is convinced that you have acquired the skill set to be safe, then you can’t advance,” said Bob Schuster, who is the director of Super Solo for PBOC, and has been involved with similar auto clubs for 33 years.

During these events, the use of the track alternates between student, Super Solo, racing and race qualifier rounds. The Super Solo rounds are generally at higher speeds and have less restrictions. For example, Super Solo drivers can pass a car on either side at will, while during the student rounds, a driver must be given permission to pass on one side or the other by the preceding driver in the form of a hand signal. After advancing one’s skills as a Super Solo driver, club members then have the opportunity to go one step further and become an instructor themselves.

“Not everybody becomes an instructor, but eventually you evolve,” said Schuster.

Bob Varela, PBOC’s President, Competition Director, co-founder and co-owner, said passing on the skills and knowledge is part of the culture.

“Somebody had to teach me, so I feel I owe it to teach someone else,” he said.

Some skills, however, can’t be taught.

“You need to be able to focus. You need an attention span. You need to almost have a sense, where you can see a shadow and be aware of it,” Varela said.

“You have to be extremely intuitive,” he said. “You have to drive within the rules. You cannot defeat the laws of physics. You have to be what I call a ‘selfless driver’ — not overly courteous, and not discourteous. There’s a sweet spot that you have to hit.”

Schuster said the biggest rookie mistake is that new drivers want to go too fast.

“They have a 700 horsepower car and a 60mph brain and that doesn’t work,” he said. “New drivers will try and impress you with their speed, but that does not impress senior instructors. What impresses senior instructors is the ability to listen, take good direction, and execute as expected.”

Varela (who also owns Foreign Affairs Motorsports in Pompano Beach) has seen clubs and driver’s schools like the PBOC evolve over the years. Varela is one of the local pioneers of the club sport. He has been involved with racing since his teens.

“I used to drag race in high school and college. I put myself through college drag racing,” Varela said. “I got into road racing in my early 20s in Europe, drove professionally for about a half a year, then started amateur racing and running some pro teams.”

In 1978, Varela opened his own sports car business.

“We thought, well, our customers would probably like to do this,” Varela said. “We worked on getting programs going and by the end of the 90s we had a performance driving school running here in South Florida.”

Varela’s early driving school had only 40 members, including himself.

“We each put $1,000 in because you have to pay for the tracks ahead of time. We were just racing and having fun. Some of the guys went on to do pro. We decided at that point that we needed to grow our own racers, so to speak,” Varela said.

Now, the club has approximately 3,000 members, according to Varela. Not all the members race. The club hosts other, more social-oriented events.

“We do drives where we’ll take 130 Porsches and we’ll drive to Key Largo for lunch,” Varela said. “In three weeks, we’re going with about 75 or 80 cars to Everglades City for stone crab. And then a group will stay overnight.”

The club also does Auto Crossing, which is essentially an obstacle course that helps drivers hone technical skills at lower speed.

“We have our own mini car shows with concoursing too, which judges cars on detailing, cleaning and originality,” said Varela. “When you get heavily involved in the club, and you’re passionate about the cars, you kind of start volunteering for a lot of stuff. You meet a lot of awesome people. You make a lot of new friends from all over the country and Canada. It’s fun. Pure fun.”

As an honorary member for a day, I’d have to agree: Pure fun. I’d personally love to join the PBOC. Unfortunately, one must own the sports car first. But hey, a girl can dream, right?

To learn more about the PBOC or get involved, visit PBOCFlorida.com. 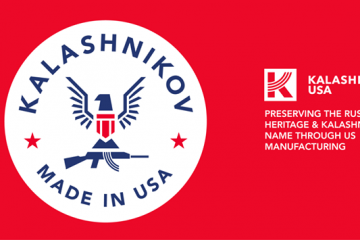