The boy scouts of Lighthouse Point

Of all the reasons to be proud of our city, we bet you never knew it has become the perfect habitat for a thriving Eagle population.  In fact, we have an abundance of mature and adolescent specimens of a rare variety.  So rare, in fact, that there are only three other places in the entire U.S. that develop and nurture a similar type of bird.  In addition, our numbers are growing.  In the last two years, we have added 11 healthy Eagles, with plenty more in the forecast.  Although you may not realize, their impact is all around you… the mayor’s office, police station, county parks and playgrounds.  ¶  The type of Eagle we are talking about requires a combination of several factors to thrive.  It needs a community with caring and involved families, with an interest in promoting strong character in their boys through outdoor experience, self-sufficiency and public service. It also requires the supply and support of many fine adults willing to spend time, share skills and experience, and mentor their young men through the seven ranks of Boy Scouts.  ¶ 1. Boy Scouts (typically 6th grade), 2. Tenderfoot, 3. Second Class, 4. First Class, 5. Star Scout, 6. Life Scout, 7. Eagle Scout.  If these conditions exist, and the boys have as much outright fun as they do in LHP Troop 238, then we will continue to host and grow a healthy Eagle population in our city for years to come.  ¶  In 2007, LHP residents Steve Zimmerman and Carlos Arenos decided to start up a Boy Scout troop right here in the city, so that boys could would not have to transfer to troops outside Lighthouse Point after completing Cub Scouts.  (LHP has had a Cub Scout Pack for over 30 years.) “After having had the boys in Cub Scouts for years, we wanted to keep them together.” says Arenos, a previous Pack 238 Cubmaster. But, they didn’t want to start just another typical Boy Scout troop.  Instead, they looked back to the original traditions of scouting and also to the emerging trends in Europe and Canada.  ¶  Troop 238 is one of only three recognized Troops in the United States based on the fundamental traditions of the original founder of Boy Scouts, Lord Baden-Powell, a British Army officer.  Baden-Powell felt that Scouting should involve the experience and skills required for self-sufficient outdoor fun, and not simply be an extension of activities boys already get in school.  “If anything we do feel like school, then we are doing something wrong.” Zimmerman states. “Steve has always made sure the boys are having fun while learning scouting skills.” says Kenton Hajdic, recent Pack 238 Cubmaster whose son Walker attained his Eagle rank this year.  “There was very little classroom learning, because most rank-advancement activities were built right into our trips and adventures.”

LHP’s “traditional” Troop members are rugged backpackers who carry everything with them while hiking or canoeing in remote areas in the Everglades or Big Cypress National Preserve to set up and run their own camps.  They wade through water and mud to get to Camp Torture, a favorite destination in the Everglades.  Muddy Photo.  They take annual “High Adventure” trips to places like Lake Tahoe, California and the Appalachian Trail in North Carolina.  Camp grounds?  Supply trailers?  Permanent grills? No thanks.  Early this summer, 15 of the boys along with some parents earned their Scuba Certification so they could go on the 2014 High Adventure trip to the Keys in August. Photo? Troop 238 even looks the part. “In most Boy Scouts troops today”, Zimmerman explains, “the boys have to take off their normal, dress uniform if they want to do an outdoor activity and get dirty.  Their uniforms are more formal, and will not be comfortable or useful in a natural setting.  For our scouts, it is the opposite. Our uniforms are designed with functionality in mind.” He is referring to the traditional Boy Scout uniform – think Norman Rockwell — designed for meeting the needs and utility of the outdoorsman: campaign hats to keep the sun and rain off their face; neckerchiefs to wipe their brow, bandage an injury, or tie tent posts together; long sleeves and socks to project against brush, bramble, and bugs; guard ropes, knives, compasses, whistles, and long hiking staffs each used as valuable, multi-purpose tools.  The one gadget they don’t carry is the one used for calls, texts or games – that one stays home.

It hasn’t always been easy – even from a scouting perspective.  “Troop 238 is physically and mentally challenging – we don’t appeal to everyone. It’s been an experimental adventure.” chuckles Zimmerman.  “We mostly do our own thing.  If we do activities with other Boy Scouts from around here and sometimes they don’t understand us.  We don’t use trailers to carry our supplies, so we don’t build fancy campsite gateways or have extravagant meals. Even among other Boy Scouts, we’re a little out of place.” Zimmerman adds, “in a good way”. In the seven years since its founding, Troop 238 has touched the lives of over 75 boys in Lighthouse Point.  This year, there are 26 active Boy Scouts (not including those in Cub Scouts Pack 238 who are younger than 11 years old).  But, with all the beckoning calls of academic homework, organized athletics, and other good old teenage diversions, it is rare for any boy to continue with the dedication and commitment required to reach the Eagle Rank.  That is what makes LHP Troop 238 so special. In 2013, 6 boys – 5 who started with the new Troop 238 in 2008 – achieved the rank of Eagle Scout.  In 2014, 5 more boys joined the ranks.  I have names if you want them. With the generous, unwavering guidance of their Scoutmaster (currently Joe Peseux; previously Troop 238 founder Stephen Zimmerman), and many other adults who support the Troop, the boys meet for an hour on most Wednesday nights during the school year at St. Paul’s Catholic Church, LHP’s scouting sponsor and chartered organization, or in Frank McDonough Park.  There they plan and work through the rank requirements with the goal of earning 13 required Merit Badges and eight additional Merit Badges of their individual choice. In addition, they will need to work in a position of leadership within the troop for a minimum of one year and perform a sizable community service project.  It all needs to be completed by the boy’s 18th birthday in order to be eligible for the Eagle Scout rank.

Even if a Scout fulfills all the merit badge requirements, the service project is what often keeps an ascending Boy Scout from the coveted Eagle rank.  It is not for the weary, weak….or distracted.  A project must be identified and approved by all involved parties, with an accompanying budget and plan to raise money.  The boys are not allowed to use their parent’s money or their own, but must seek out financial support from others.  In addition, they are not allowed to complete the project themselves, but must recruit the assistance of others so that the Scout will gain supervision as well as hands-on experience.  A final report is compiled and presented to the Scoutmaster before this project gets final sign-off. “These projects give young men opportunities to plan and execute a job from start to finish.  They build confidence as the overcome the difficulties that can be involved in coordinating a lot of detail, working through the inevitable problems and supervising other boys  – many of whom are older than them.” states Dave Moore, the Life-to-Eagle Scout Coordinator responsible for helping the boys move their projects along, and an Eagle Scout himself.  “It is particularly rewarding to watch them deal with unforeseen obstacles, such as delays or weather issues.  Appreciation of detail and contingency planning is new to some of them, and coordinating it all while making sure they deliver a highly satisfactory product to the beneficiary can be a big challenge.”

Look around.  Have you seen the new trail markers on Deerfield Island?  Mark Speedy’s Eagle Service Project was to design, build and install them. Photo? How about the custom designed, hand-built cow feeder or bridle trail markers at Tradewinds Park — Jeff Zimmerman’s and Jackson Moore’s Service Projects, respectively.  Photo? The “rules” signage at the Frank McDonough Tot Lot Playground was designed, built and installed by Walker Hajdic.   Photo? William Petri supervised the purchase, assembly and distribution of 200 “Love Bags” filled with important essentials with Hope South Florida for the homeless in Broward County. Photo Tristin Vaughn built a fence to protect endangered plant species at Birch State Park. Rob Calhoun built animal-proof recycling containers and Andrew Rising built wild animal enclosures at the South Florida Wildlife Center.  Dan Guest and Dan Chaples offered their services to Tomorrow’s Rainbow by rebuilding their water table and sandbox and small animal stable.  Austin Peseux builds benches and cleared a primitive trail for Fern Forest.
The benefits of having Eagles among us are obvious not only to us LHP residents, but also to future schools and employers.

After high school and college, you can be sure the “Eagle Impact” continues to make a difference.  We were curious about how many adult Eagle Scouts reside among us, so we recently reached out to all Eagle Scouts in LHP with a request to identify themselves.  We are happy to report we know of 23 Eagle Scouts in our city including Lighthouse Point Mayor Glen Troast, Capt. Gary Oh (LHP Police Lieutenant) Dave Moore, Steve, Nouss, Dr. Brian Rask…..etc. The self-efficacy, love of nature, and outdoor skills these men developed and enjoyed while young contributes to a lifetime of knowledge, service and leadership which benefits us all today.  Whatever their age and occupation, we should all be proud to live in a city that hosts, appreciates, mentors and benefits from its very own rare and special “Troop of Eagles”. 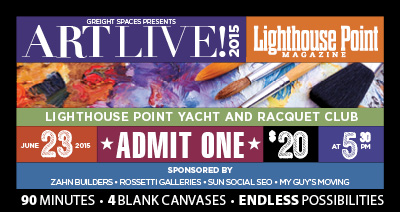