Fred Schorr, who retires in March, will surely be missed.  He brought to the city a unique perspective while serving Lighthouse Point for more than a decade.  He used his background as an engineer to full advantage while facing the challenges that come with being the city’s top administrator.  His immediate goals 11 years ago were not glamorous.  He had no interest in using his position to pursue higher political ambitions.  He was task oriented. Retired from The Coca-Cola Company as Director of Engineering, Fred fully realized the importance of focusing on detail.  He didn’t just rely on the experts – he was one.   He was the type of guy who would put on the hip waders and check out a bridge from underneath or climb into a grimy storm water construction site to personally inspect the work being done. When he became mayor after the election in 2003, he knew that the city’s infrastructure was rapidly deteriorating and that his priority must be to repair roads and bridges and renovate the city’s aging storm water system if the city was to continue to properly serve the residents and maintain property values.  “Fred had the unique ability to be hands on,” said Public Works Director Art Graham.  “He brought a creative dimension – he understood what you were talking about on complex issues and as a result could make a solid value judgment which benefited the city.”  He was also keenly aware that the city had outgrown its administrative offices.  With a bond issue recently passed to provide the funding, he saw an opportunity to purchase the vacant school adjacent to city hall and build a new police station, do a complete renovation to the community library, city hall, fire department and Dixon Ahl Hall, and turn the whole complex into a state of the art municipal campus.  He felt the complex would go a long way to improving morale of city staff while also demonstrating to local residents that the city had grown more sophisticated and had a stable governmental environment.  He considered customer service and public safety to be a top priority. To say Fred was a fiscal conservative would be an understatement.  He was determined to keep Lighthouse Point’s tax rate among the lowest in Broward County and he made it standard operating procedure to apply for federal and state grants for every project imaginable to save the city operating expense.  You might say he never met a grant he didn’t like.  In fact, during Fred’s tenure, the city obtained more than $10 million in grant funds, according to City Administrator John Lavisky.   Whether it was trees and landscaping along the roadways, municipal facilities, bus transportation, bridge and road repair, Fred made sure grants were applied for before a dime of city money was spent.  As a result, the city can boast a reserve fund in the coffers that is nearly three-fourths the annual operating budget – unheard of in most communities.  The tax rate is the third lowest in Broward’s 31 cities and the two that have lower rates have higher fees to compensate for the lower millage.   “He is the best boss I ever worked for,” said Lavisky.  “During my military career, I worked for a lot of generals.  Fred was of that quality.  Very smart.”

And then there were the politics.  There was turmoil in the city back in 2003.  In fact, it was the contentious nature of the City Commission back in 2002 that in part, prompted Fred to run for mayor.  Many at that time were very concerned about the direction of the city.  There were lawsuits, votes of no confidence and threats of mass exodus among city employees.  Lavisky said one of Fred’s biggest contributions was the implementation of the fire and police pension plan and it couldn’t have come at a better time.  City employees were being lured into jobs with competing agencies and cities.  But once the pension situation was settled, attitudes turned around, he said.  Even more remarkable, the pension is fully funded which is extremely rare in these days of government-funded pensions.  Fred was determined to keep civility at a maximum and partisanship at a minimum, Fred began an open door policy with city employees which he maintained throughout his tenure as mayor.  He had the ability to keep controversy and disagreement at reasonable levels.  With more than 100 city employees, 7 strong-minded department heads and a host of municipal boards and community agencies with some of the best, brightest and outspoken local residents, this is no small feat.  Add to that an independent-minded City Commission that had its own ideas on policy and procedures and the potential for explosive confrontation was inevitable.  In most cases, he was able to tamp down and head off problems before they got out of hand.  His personal philosophy was to stay in front of an issue, build consensus, then deal with the matter straight away.   Fred believed he could make a difference.

One of his priorities was to be a highly visible mayor – important; he felt to be seen out and about by city staff as well as the residents of Lighthouse Point.  He made it his business to attend every city function and public event and welcomed the spotlight.  “You know, I’ve teased the mayor,” said John Trudell, the city’s long-time recreation director.  “Fred Schorr was the one city official who attended every one of our city-sponsored functions.  Whether it was the first baseball game of the season or the annual Easter Egg Hunt, Fred was there.  He is a real people person.” Perhaps one who will miss Fred the most is Doreen Gauthier who recently retired as the director of the library.  Fred knows talent when he sees it, and by working with Doreen, he and she put together one of the finest municipal libraries in Broward County.  “How can you even begin to thank somebody enough,” Doreen said recently.  “This is a man who believed in me.  On his very first day in office he took a chance and gave us $28,000 which together we turned into $1.4 million and built a showcase showplace.”  She said the accomplishments done by Fred in the municipal complex were outstanding.  “He had excellent rapport with staff,” she said.  “He led by example.  He was a remarkable leader.”

Police Chief Ross Licata was another department head who spoke highly of the mayor and his contributions while praising his leadership.  Ross said Fred deserved special recognition for his innovative thinking in support of the city’s License Plate Recognition System.  In its use of the system, the Lighthouse Point Police Department has been awarded nationally and state-wide for development and use as a tool of law enforcement. “It is Fred who should be recognized for his forward thinking.  The enhanced safety afforded our residents through the license plate identification system is a testament to Fred’s leadership,” said Ross.  “This system has provided benefits to our residents beyond our expectations.”

Ross described Fred as the best boss he ever had. 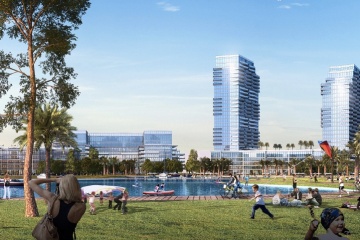