Successful siblings in the world of sports are few and far between. The outstanding brother duo of Peyton and Eli Manning, professional football quarterbacks for the Denver Broncos and New York Giants, are shining examples. And let’s not forget Serena and Venus Williams, easily the best sibling combo ever to grace the tennis courts.

But, at this very moment, in our little community of Lighthouse Point, live Todd and Kirsten Flegel, proud parents of two of the best, if not the finest wakesurfers and wakeboarders in the world ever to take to the water. What are the odds of that fact?

Fourteen year-old Noah Flegel and sixteen year-old Keenan Flegel became interested in the sport when they observed a boy in their neighborhood wake boarding in the canal near their home. The Flegel boys were only four and six at the time, but they pleaded successfully with the neighbor to teach them.

Noah appeared on the cover of Sports Illustrated for kids as Sports Kid of the Year in the December, 2011 issue. In the photo he appears to be flying through the air like a bird, and I assure you that after seeing him perform, this is a phenomenal talent we may soon see in the Olympics, that is if the 2016 Olympic committee will consider the sport of wake boarding as credible enough to compete. After witnessing the Flegel brothers in action, I think they’re chances are spectacular!

Keenan is already a professional wake surfer, and has won every wake surfing competition he’s attended this year, except one. “If there’s waves in the ocean, I surf,” says Keenan. “Most times we’ll go directly after school and return home after dark to do our homework.”

Maintaining high grades is not a problem, even though they spend a great deal of time in the water, not to mention their traveling to wake boarding and wake surfing competitions all over the world. They presently attend North Broward Preparatory School.

In the business end, the boys have multiple sponsors each that include Centurion Boats, Liquid Force Wake Boards, Go Pro Cameras, Body Glove (wet suits) and Reef Clothing supplies their everyday clothing. They are also sponsored by LTS, a wake boarding school, Island Water Sports, Miami Ski Nautique and Inland Surfer. The companies supply them with free gear, entry fees, travel costs, and free use of a Centurion boat, as well.

Both boys idolize their trainer and friend, Dean Lavelle, six-time champion wake boarder at the WWA, the world wake boarding association. He runs his wake boarding school at Crystal Lake in Pompano Beach.

“We chose Dean because he didn’t party, drink or use bad language, and was known as ‘Clean’ Dean LaVelle. He took training and competing seriously, and eventually helped the boys with their homework when they were on a tight training schedule,” says Kirsten.

“Keenan loves to push the sport by doing things that have never been done before. He has videos on Youtube that get thousands of hits, watched by wake surfers who study the videos, trying to figure out how Keenan does what he does,” adds Todd.

“Our family will be traveling again soon to Washington, Colorado, Texas and back to Florida for Noah’s Junior Pro Tour. He hopes to turn pro within the next few years,” explains Todd. “He’s had a good year with two World Championships, a National Championship, and also winning the coveted ‘Sports Kid of the Year’ award.

We are so proud of both boys!” 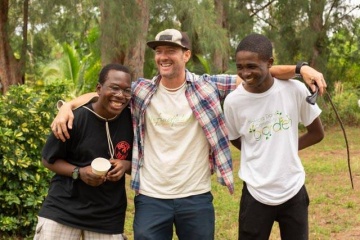