After a provocative season of shows at the Pompano Beach Cultural Center, the Cultural Alliance's resident theater company Outré's next production of "Hedwig and the Angry Inch" in March may be the company's last in Pompano. With shows like “1984,” “American Idiot” and “Reservoir Dolls," the company's ethos aims to push boundaries. However, themes touching on sex, drugs and violence have met with consternation from audience members, leaving Outré's future in Pompano Beach uncertain.

The playbill for “Reservoir Dolls,” which the Outré Theater Company opened at the Pompano Beach Cultural Center on February 3, promises viewers an experience at variance with propriety.

It begins with an exhortation of forewarnings against “explicit language, violence, sexual themes, and badass women,” which Assistant Artistic Director Shannon Ouellette recites upon the stage over a plastic cup of red wine.

“Because we live in such a crazy world,” she says, “I have to tell you that this show is rated R.”

At first blush, the warning label on “Reservoir Dolls” strikes one as superfluous, a glib preface inserted for easy giggles; but the advisory has, in fact, been made necessary for Outré to include under mandate from the Cultural Alliance — the collective of artists and performers who run the Pompano Beach Cultural Center — who now require such notations within all press material for shows whose content could be construed as racy or vulgar.

“They inserted a morality clause into our contract,” said Skye Whitcomb, Outré’s Art Director, “which states that anyone, for any reason, can make a complaint about our show, and the city can shut it down immediately.”

Under the terms of the morality clause, inappropriate content can include variations on “the maturity of the theme, the actions of the performance, or the language of the performance.” It further stipulates that each member of the Cultural Alliance — to which Outré happen to belong — shall “include in all advertising a phrase acceptable to the Cultural Arts Creatives (CAC) that notifies potential ticket buyers to the fact that the event may include potentially objectionable material.”

“For ‘Reservoir Dolls,’ we had to have this long list of warnings,” said Whitcomb. “And they wanted us to have two security guards at every production in case an audience member thinks a prop is a real gun.”

Outré’s production of “Reservoir Dolls,” playwright Erika Sorensen’s riot-girl feminist take on the film “Reservoir Dogs,” features an all-female cast enacting counterparts to characters who in the Tarantino film are played by men. The play is an anti-repressive crusade against patriarchy — a treatment of gender roles, sexism, and social contracts — and Outré’s women are sufficiently bawdy in their sending-up of the film’s boisterous male archetypes.

Despite being capable thespians, Outré’s presence in Pompano Beach has been fraught since the local troupe took to the stage last autumn as the center’s resident theater company. Audience members have complained of obscene performances, and Pompano’s Cultural Alliance has been blamed for having allowed such productions to transpire.

The apoplexy over Outré’s output is a result of the group’s intent to bring subversive theater to the otherwise staid local stages of South Florida.

Productions like “Reservoir Dolls,” and the upcoming “Hedwig and the Angry Inch,” challenge heteronormativity and gender identity, while last fall’s production of “American Idiot” sought to capture youth lost to sex, drugs, rock and roll, and the kind of exquisite excess that leads nowhere.

“Hedwig and the Angry Inch,” a musical, is on the docket for March, and is about a genderqueer rockstar from Germany named Hedwig, who contends with one lamentable last inch of male genitalia after a bungled sex-change surgery while entertaining a dalliance with an American soldier in East Berlin. Just like Jack in his corset and Jane in her vest, as Lou Reed would say, there will be drag kings and queens, wigs and dresses and lipstick on men, and allusions to oral sex and prostitution. Scenes in dive bars will abound upon the stage come March, and “Hedwig and the Angry Inch” will perhaps end Outré’s tenure track at the Pompano Cultural Center.

“We’re currently looking at spaces,” Whitcomb said. “One in Boca, one in Hollywood.”

Whereas the group were embraced in Boca Raton, where FAU students welcomed their experimental ethos, Outré have been ill-received in Pompano: “It’s been made very clear to us that what we do is not welcome,” Whitcomb said. “This is not the Creatives, they like the kind of work that we do, but it has been made very clear to us that the powers that be in the city don’t.”

Which has been the case in Pompano, where the umbrage that audiences took with Outré’s work did prompt the Creative Alliance — at the behest of the City of Pompano Beach — to invoke the aforementioned morality agreement.

Michael Tipton, who directs the Cultural Center, spoke on matters differently: “There has obviously been some confusion,” he said, “as the morality clause was implemented by the Cultural Arts Creatives, not the City; it was added as an across the board policy for all Alliance members and no programming has been halted since implementation.”

“We added this policy to provide a review period for all programs, giving us time to notify patrons, just as they do with films and television programs that may have mature content,” he said. “Neither the city nor CAC has ever, in any way, expressed any sentiments that would make Outré feel that their programs were not welcome. In fact, the city has been extremely supportive of all of our Alliance members. The Cultural Center invites community conversation and applauds diversity of programming.”

The current Alliance program expires on September 30, 2018. A decision has not been made as yet over Outré’s future relationship with the Cultural Center, or that of any Cultural Alliance Member’s, Tipton has said. But Whitcomb has questioned whether Pompano Beach is the right place for his company. Whitcomb explained how the agreement, in his eyes, quite clearly states that a show, if ruled indecent, can be dropped at the eleventh hour, and that this is possible due wholly to the fact that the Cultural Center happens to be financed by the City of Pompano Beach, rendering the Cultural Alliance a functionary of city government.

Whitcomb also explained that if a show is canceled, responsibility then falls to the theater company itself to cover the cost of the financial fallout: “That we are still held accountable for all of the money and all of the expenses is unacceptable,” Whitcomb said of the measure. “Especially for the kind of work that we do, which is meant to be boundary pushing, which is meant to be challenging.”

When the Pompano Cultural Arts Center brought on Outré last year, just before the center was due to open — as they did with a number of different performing companies in music and dance — they did so with a goal toward forming the Cultural Alliance. Their intent was to make art, and especially performing art, accessible to Pompano Beach citizens.

“There is a tremendous amount of art happening in Pompano, stuff that is challenging, stuff that is visceral and provoking, and we are hoping to bring the performance aspect of that to the City,” he said. “Our point of all of the work that we do is to make people think. There’s a slogan that we use on a lot of our stuff, which is that we ‘make art, not fluff.’”

Over coffee and doughnuts by the Intracoastal at the decline of day, Whitcomb muses on future prospects for Outré. An English teacher who moved to South Florida from Savannah, Georgia, with his wife eleven years ago, Whitcomb, who grew up in the military, says he is used to a kind of gypsy wandering.

“My wife and I are both military brats,” he says. “We’re not really from anywhere, we’ve moved around our entire lives.”

To the exclusion of local derision — and in spite of questions of location which make it uncertain where the troupe will perform next season — Whitcomb and his colleagues have embraced what praise they have received from the miniature cult following that have amassed about them, and morale among the performers seems consistent.

“We don’t want to go, we don’t want to leave, and we would love to continue to perform there,” Whitcomb said, “but I’m not willing to sacrifice my integrity for a deal.” 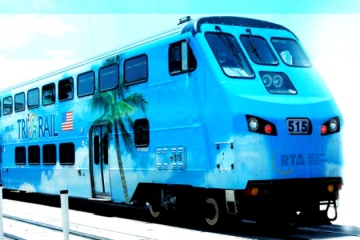