St. Thomas – Gem of the Caribbean

THE BEAUTY AND MAJESTY OF ST. THOMAS

Story and photos by Jon Frangipane

Maintaining a balance is the most important thing in anyone’s life. That fact became very apparent to me as I began preparing for publication of the September issue. On a Monday morning, as I sat at my computer, the emails began to pour in, the phones began to ring off the hook and another deadline was staring me in the face. That moment, I looked at my cat and said, “Berkel, sorry old buddy, I’m out of here!” I booked a trip to St. Thomas in the U.S. Virgin Islands. Berkel called me a traitor. 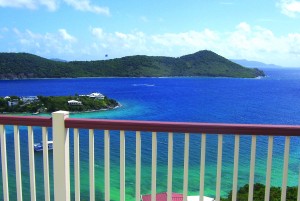 It had been many years since my last trip to St. Thomas (with my second wife), but I thought it would be nice if I could enjoy myself this time. After a phone conversation with resort director Jennifer Jarvis, at Point Pleasant Resort, I was convinced this would be a good decision. The Two and a half-hour trip got me to Cyril E. King Airport in Charlotte Amalie at about 3 pm. In 45-minutes, a shuttle brought me to Point Pleasant Resort on the northeast part of the island. The resort is entirely built on the side of what we in Florida would call a mountain, and I had requested a room at the top for the best photo opportunities.

I had explained to Ms. Jarvis that I would be doing a feature article for the Lighthouse Point Magazine. I thought maybe… just maybe she would perhaps treat me a little bit differently. Ms. Jarvis certainly was polite and accommodating, assuring me that I would be happy, but yet my suspicious nature prevailed.

So, let’s start with loading the luggage and the shuttle ride going up almost to the top of the hill to my living unit. So far, so good. I climbed 10 stairs up to my door, walked in expecting the usual boring, dimly lit, tasteless single room I’m so used to being hit with. I was ready for a fight. Why should this experience be any different the many previous disappointments?

Well, will miracles never cease; to my extreme delight was a bathroom to the right, a spacious bedroom to the left, a hallway down three steps to a kitchen on the right, and just ahead a 25 x 15 foot living room/dining room area with high vaulted wood ceilings, including a huge wrap around outdoor balcony, overlooking seven islands, set in a sparkling emerald Caribbean Sea. And you could easily see St. John to the very right, as you looked out from the balcony… and on the dining room table sat a complimentary bottle of the U.S. Virgin Island’s legendary Cruzan Rum. It was obvious that Ms. Jarvis was treating me like royalty from the very moment I arrived. (For a photo of the suite, please visit www.point pleasantresort.com/point-pleasant-photo.htm)

Other than experiencing swimming and snorkeling at nearby Sugar Beach and three good-sized swimming pools, you can wander through unique nature trails that wind through the entire property. Proper footwear is in order to climb up and down some of the steeper walkways and paths that wind around the living units. It is truly a wonderland of flora and fauna.

After settling in for an hour or so to relax and soak in all the glorious visuals, I took my first ‘nature walk’ way down to the base of the hill to Fungi’s Restaurant, a quaint and colorful shack-type place to enjoy local native cuisine. Chef Ramp introduced me to a delectable Roti, a thin, tortilla-like bread, wrapped around curried meat and mango chutney. This spot is also the departing area for parasailing and champagne day cruises aboard two sailing vessels called the Winifred, a 43-foot wooden yacht, and the Morningstar, a 42-foot Cheoy Lee Cruiser. 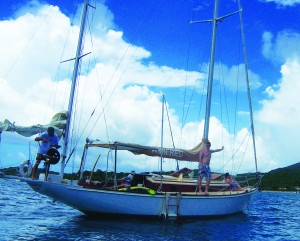 The very next day I sailed on the Winifred on a day trip to Honeymoon Beach at Caneel Bay Resort in St. John only 3 miles away. There were five other passengers from all walks of life and a crew of two. We hit a heavy squall line on the way over, thankfully much before our scheduled Champagne lunch. Commodore Mike Rose, formerly from Madison, Ohio and Captain David Adams, formerly of Stockton, Missouri, were on hand to meet all our needs aboard the Winifred.

We snorkeled in the serene, turquoise Caneel Bay and explored the pristine Honeymoon Beach and Resort, nicely ensconced on a small portion of 5,000 acres of U.S. Virgin Islands National Park, donated to the Federal Government by Laurence Rockefeller in the early 1950s. After a pleasant stay at the beach, we climbed back aboard the Winifred and headed back to St. Thomas. The lunch was grand, even though the champagne had to be sipped from paper cups.

Interested in seeing more of the St. John landscape, the following day I taxied down to the little town of Red Hook and hopped a ferryboat ride to Cruz Bay in St. John. The 20-minute ride cost $12 round trip. After docking, I headed for Wharfside Village Park, just one block from the landing. A bust called ‘Freedom,’ celebrating the slave’s emancipation in 1848 by the Danes stands prominently in the center of the park. An old, heavily bearded man named Daniel (who refused to give me his last name or take photos) was oil painting a conch shell. Upon viewing the shell, you could say I became shell-shocked, because it had to be an absolute insult to the poor conch that once resided inside. We struck up a conversation that included a history lesson regarding the slavery trade that once existed there, the island’s legendary Cruzan Rum, the ownership of the island by Denmark in 1754, the island’s legendary Cruzan Rum, his painful arthritis… and the island’s legendary Cruzan Rum.

During my history lesson, Daniel also told me about the 400 wild Asses that roam the countryside, but was only able to see a few donkeys during a 1-hour bus ride to Salt Pond, at the very opposite end of the island. Just my luck, I chose a lady bus driver with a death wish, who drove through the mountainous roads with reckless abandon. Instead of braking as she approached hairpin turns, she would lean on her horn just seconds before to warn drivers coming in the opposite direction. She stopped the bus and helped to clear some trees downed by the sudden squall earlier. Upon arriving at Salt Pond, a long path led down to a magical tropical setting. This beach exists in a most remote, quiet, undisturbed part of this, the smallest inhabited island in the U.S Virgin Island chain.

Upon my return to Wharfside Park, I caught a bite at a New York style deli, and then stopped in a little, quaint curio shop. As I entered, a beautiful female voice could be heard singing familiar Broadway musical songs. No Calypso? No Reggie? It was a lovely lady named Kourtnie, sitting behind a counter. As I approached, her voice slowly became softer and softer. She seemed embarrassed when I asked, “Why aren’t you on Broadway?” “I just do it for fun,” she sheepishly replied. Kourtnie’s voice was special and I encouraged her to pursue a singing career, and offered to take her to the States and make her a star. I left my number. She hasn’t called.

I made every effort to avoid conch artiste Daniel on my way back to the ferry.

Back in St. Thomas, clearly visible from my balcony, and just across Water Bay from Point Pleasant Resort, is Coral World. Not only does it include an undersea observatory, a living coral reef recreated in an 80,000-gallon tank, shark feedings, a stingray lagoon, iguanas and various bird species, but Coral World also serves as a rehabilitation center for sick and injured sea turtles. It’s at a walkable distance from the resort for the heartier souls. Valerie Peters, an attractive brunette and director of marketing at Coral World, gave me the pleasant tour. I told her that I was free that evening. She never called. (Check out www.coralworldvi.com/cwvi)

By the way, anyone renting a car must remember that driving is done on the left side of the road only. I was told that some years back there was a government attempt to switch to the right side, but natives had trouble in adapting, resulting in many traffic accidents. I did not rent a car.

I was lucky to find a taxi driver named Cory Abramson who knew the history, culture and the best locations for dramatic photos. He used his small car so we could navigate the narrow, winding roads that seemed to be his specialty. You can ask for him at the resort if you need a driver.

Early on, we visited Bluebeard’s Castle, dating back to the 1600s that is now a resort and occupies an entire hilltop. From that vantage point you can admire the harbor and town of Charlotte Amalie.

Mountain Top, also known as Signal Hill, the highest point in St. Thomas, was our next stop. The peak is 542 feet above sea level and was used in the 1940s by the U.S. government as a strategic communications location. Mountain Top is a scenic overlook that houses shops, a dining area and bar and a balcony for taking in the breathtaking view of Drake’s passage, the British Virgin Islands and beautiful Magens Bay. Mountain Top holds the title for having the original and best banana daiquiris on the island.

Tillett Gardens, located next to the port, was once an old Danish farm and transformed into a center for local artists and performers by Jim Tillett, an English silkscreen artist, who arrived on St. Thomas in 1959. The area features quaint restaurants and shops, and not too far away an historic landmark bank and an entire street for diamond lovers. Corey and I had a nice lunch at Glady’s Restaurant.

Emancipation Gardens, at the east end of Charlotte Amalie, was built to commemorate the freeing of the Danish West Indies slaves in 1848, ten years before Lincoln’s Emancipation Proclamation.

99 STEPS, built by the Danes in the 1700, is located between the Government House and Hotel. This will get your heart pumping as you climb up to where stone remains of Blackbeard’s Castle sits, now converted to an inn.

Heading back east, and near Point Pleasant Resort, is the little village of Red Hook. Various stores are located there, many of which cater to the boating community. Ferries to St. John and the British Virgin Islands depart from the Red Hook Ferry Dock. Many charter boat companies are located in the vicinity. Red Hook is home to several good bars and restaurants.

Heard stories from Commodore Mike, owner of Morningstar Yacht Charters that many visiting St. Thomas from the States decide to stay. Would I ever consider that option? As enticing and inviting as that may seem, one could only accomplish that with no other obligations in life. Too many family ties, a monthly magazine…and a cat that would be just like having my second wife back. Would I return for a visit? What do you think? I’d like to thank all my new friends: Mike, Dave, Shawn, Charlie, Chef Ramp, Cory, Lenny, Kourtnie, Valerie, and especially Jennifer Jarvis and her great staff at Point Pleasant Resort that made it such a point to be pleasant!

Merchant of the Month

St. Thomas – Gem of the Caribbean