If you haven’t visited the Seminole Casino in Coconut Creek recently, you are in for a wonderful surprise. The newly refurbished and upgraded establishment is a certainly a sight to behold.

Last month, photographer Debra Todd and I visited with Seminole Casino Coconut Creek President and Lighthouse Point resident, Steve Bonner. On this night, we witnessed the 2013 Bacon Fest, featuring area restaurants, and the Bacon Brothers and the Dan Band with almost 2500 in attendance. Hormel Foods supplied the bacon for the huge event.

Winners were: Kapow for Best Appetizer, Noodle Bar for Bacon and jalapeno ragoon with chimichurri sauce and shot of strawberry lemonade with bacon salt, Best Entrée was Gimme A Burger-Coffee for their infused bacon, wrapped with a coffee/brown sugar rub with thin sliced red onion and cheddar cheese, Best Dessert was Bacon bites and their Chocolate covered bacon with peanut butter.

Named the “Best Place to Gamble” by Broward-Palm Beach New Times, Seminole Casino Coconut Creek currently offers more than 2,300 of the latest and greatest slot machines including Las Vegas-style slots. Two of the most popular games are The Hangover and Leprechaun Gold. Some of the most popular progressive slot machine titles are Ghost Busters, Diamond Jackpots, Vegas Paradise, Monopoly Big Event, Wizard of Oz and Slingo Bonus. Denominations range from one cent to $100. As part of its recent $150 million expansion, the casino now offers a new non-smoking area for slot players.

The casino now offers 65 table games, including live blackjack, baccarat, and popular novelty games such as pai gow poker. It features 24/7 high stakes no-limit action in its Stax Poker Lounge, with a wide array of tournaments for all types of players. Live poker games include Texas Hold ’em, 7-Card Stud, and Omaha tournaments from $85 to more than $1,000.

We talked with Steve Bonner:

Q: The Seminole Casino is quite an undertaking. What would you say was the genesis for getting such a unique job?

Bonner: I took the job working the graveyard shifts installing machines in a casino in Colorado, so I could have some income while I looked for a real job. After a couple months, we got the casino open and they decided I did okay, so they put me in charge of this place called Bullwhackers. That was in 1992.

Q: How long were you employed there?

Bonner: I spent about 10 years at a couple different casinos in Colorado. I helped open some and helped remodeled some, as well.

Q: Where in Colorado would you find casinos back then?

Bonner: Casinos were in mountain gold-mining ghost towns. And I opened some of them. There were three ghost towns in the early 90’s they wanted to revive and make them tourist attractions, so they approved gaming in those towns. When I first moved to Colorado, there was no one else there who had any experience in gaming because there were no casinos at that time, so there was a lot of opportunity there.

Q: How did the Seminole Casino opportunity come about?

Bonner: I had worked with our current CEO Jim Allen in Colorado. Jim then worked at the Atlantis in the Bahamas for a while, and finally came to work for the Seminoles. He called me one day and said, “Are you ready to leave Colorado?” And I said, “I’m on the next plane!” I arrived here about the time they started construction on the Hard Rock casino in Hollywood. That was ten years ago, and I’ve been here ever since.

Q: How did you come to choose Lighthouse point as your home?

Bonner: When I moved here I wanted to be close to work and never in my wildest dreams thought I’d still be here ten years later, so this is great. And the kind of stability with the Seminole tribe is wonderful, and wonderful to work for. They’ve been over the top as far as being a great company, and it’s also a great family atmosphere. The tribe stays involved and well aware of what’s going on in the organization. But at the same time they let us do the very best we can for them and members of the tribe.

Q: Is your family here?

Bonner: Angie and I live together with our daughter, Elle. She’s five and we’ve been living in Lighthouse Point for five years.

Q: Do you see any familiar faces from the Lighthouse Point area taking advantage of this exciting facility?

Bonner: There’s a certain group of people from Lighthouse Point that do come over, even if it’s not for the gaming piece, but to partake of the new restaurants and concert venue. But there are still people unaware of this great casino right down the street. 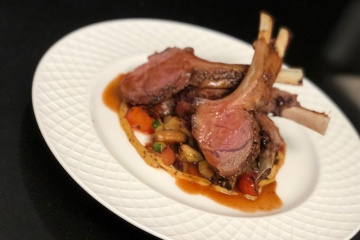