Deerfield’s station was built on Hillsboro Boulevard west of town. The terminal building, designed by Gustav Maass, was Spanish Mediterranean in style and featured arched entryways, arcades, stucco walls, and a barrel-tile roof. The stucco finish was painted in the characteristic pink color accented by green trim. Bill Muenzenmaier, past president of the South Florida Railway Museum, said the depot had three storage bays and was one of the larger depots built at the time. When the station opened in 1926, it was dedicated by S. Davies Warfield, president and CEO of the railroad, and John W. Martin, governor of Florida.

The Butler brothers, J.D. and George, prominent area farmers, were instrumental in obtaining right of way for the depot. Upon opening, it immediately became a produce shipping center with farmers from Pompano to as far away as Lake Okeechobee renting warehouses there. Even the Butler brothers had two warehouses built in 1927, one of tin and the other of wood. They shipped carloads of produce – cucumbers, beans, peppers, and eggplant – from the depot to Chicago and New York. Passenger trains also made regular stops as well – The Silver Star, The Orange Blossom Special, Sunland, Palmland, Floridian, and Silver Meteor.

Outside paving was originally laid in 1927 but was repaved by the Army Air Corps in 1942 when the Boca Raton Army Air Field occupied land west of Boca Raton during World War II. The military used the depot warehouse to store materials for building the base, and many soldiers traveling to temporary basic training facilities at the Boca Raton Hotel disembarked at the station.

Al Rouffa was a 22 year old soldier heading to the Club for basic training when he witnessed a tragic event. Just after getting off his train and while it was still in the station, a second train plowed full speed into the back of it. One person was killed and four injured in the incident.

The railroad station remained in use throughout the next five decades, but by 1990 was in such poor condition that the Greater Deerfield Beach Chamber of Commerce spearheaded an effort to restore the station to its original 1920’s splendor. The $300,000 face lift, completed in 1992, included a new clay tile roof, metal rollup-doors at the baggage area, replastered outer walls, and refinished wooden floors. The renovation also created space for a museum in the old freight room. Since then, additional renovations have been made to the building.

The station is listed on the National Registry of Historic Places as well as a Historic Site with the State of Florida Department of Archives. It currently is served by Amtrak and Tri-Rail commuter rail system.

The South Florida Railway Museum housed in the depot opened in 1994 and is headed by a dedicated group of railroad enthusiasts who volunteer their time. The museum consists of several miniature railroad displays and artifacts.

The organization is qualified to instruct the public in the “Operation Lifesaver” program, to make people aware of our rail crossings and how they can make them safer. They are also certified to teach the Boy Scout Merit Badge programs that pertain to railroading.

The museum is open Wednesdays 6pm to 9pm and Saturdays Noon to 4pm. For more information, please email the museum at sfrm.org@gmail.com.

The orange caboose that sits on rails next to the Old School House and City Hall on NE Second St., is a former Seaboard Coast Line car. “The caboose was originally built in 1951 as a boxcar to carry general freight. When Atlantic Coast Line and the Seaboard Air Line merged to become the Seaboard Coastline, they took the boxcars and made cabooses out of them,” said Muenzenmaier, who along with Ed Dietrich spearheaded restoration efforts through the Deerfield Beach Historical Society.

When renovations are complete in 2019, the caboose will serve as an educational tool with visitors enjoying regularly scheduled tours as they listen to fascinating railroad history recounted by volunteers from the South Florida Railroad Museum and Deerfield Beach Historical Society. 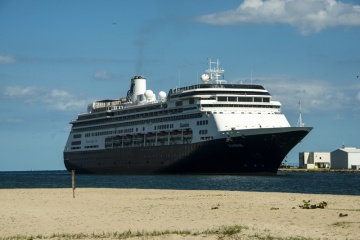