Whenever my mom visits Florida, she gets all decked out in her spandex shorts, hot-pink fanny pack and visored helmet, rents a beach cruiser and gets out to ride in the Gold Coast sunshine. Last March, she told me about this amazing ride she took along A1A to Gumbo Limbo Nature Center where she saw sea turtles. Her nature-inspired journey sounded pretty nice, but as an adrenaline junkie seeking out her next urban adventure, I tried to think of a way to spice it up a little.

That’s when I remembered seeing a hippie riding an electric bike. When I first saw him, I was perplexed; he whipped by so fast for a skinny dude on a bike, yet his feet were completely still. He wasn’t even pedaling. When it occurred to me he was riding an electric bike, I thought, “What a cheater’s way to ride a bike.” A year passed, but the image of that hippie, cruising at top speed, his unwashed locks and sherpa-inspired sweater blowing in the wind behind him, imprinted itself onto my mind and suddenly resurfaced as I pondered my next adventure.

So, I set out to find some electric bikes for rent. I located two at the Royal Blues Hotel in Deerfield Beach. I had never ridden an electric bike before, so was a little giddy as Jason, the hotel’s receptionist, plugged in the hefty battery pack, which slides onto a rack behind the back wheel of the bike. On the handlebar, three little lights (one green, one yellow, one red) flashed and lit up, indicating the bike was powered up and ready to go. I suddenly felt like he had strapped on some sort of rocket booster.

“Are you ready, are you ready?” he asked, as I mounted the bike and he twisted the throttle to show me how to kick on the power. The bike propelled quicker than I thought, and I nearly swerved into the wall of the parking garage. I laughed, narrowly missing it, and made a quick turn, then biked a few laps around the lot. I gave the throttle a little power to test it out, and suddenly felt like a five-year-old again, riding my Barbie bike without training wheels for the first time. It was exhilarating.

I pulled out of the lot, and along with a friend, rode west to A1A, then north toward Boca. A1A has a convenient, smooth bike lane for miles, so it was the perfect place to press the e-bike to the max. I was surprised at how fast it went. I made the mistake of wearing long, dangly gold earrings, which flew back in the wind like floppy dog ears. The ocean air whipped my face and my sweater lifted from my back, flapping behind me like a Superwoman cape.

We passed the Boca Inlet park (a perfect spot for a picnic and to watch boats leaving the inlet), admired multi-million dollar mansions and luxury yachts along the Intracoastal Waterway, and made our way to South Beach Park, which has three swimming beaches and a pagoda. The beach looked inviting, but we were too hungry, so hung a left on Palmetto Park Road for a bite.

We had been given a personal recommendation from the chef at the Royal Blues Hotel to go to M&M Thai for lunch (a friendly, family-owned, authentic Thai café), but it was slightly too early, so opted for brunch at the Boca Beach House (which specializes in local, organic produce and seafood). That day the chef had hand pulled Maryland crab claws for a crab Benedict, had picked organic greens from the restaurant’s backyard garden (arugula, kale, bok choy and Swiss chard) to put in an omelette with goat cheese, and had sautéed some homegrown Brussels sprouts in a balsamic glaze for an omelette with bacon and Swiss cheese. In addition, there were three other seafood omelettes: one with local diver’s sea scallops (blackened or grilled), one with soft-shell crab and another with Maine lobster.

While the omelette I ordered came out quite overdone, the hollandaise on my friend’s Benedict a bit separated, and the prices steep (between $17 and $20 for an omelette), I found a forgiving heart based on the inspired ingredients and charming environment. After brunch, we cruised on up A1A to the Gumbo Limbo Nature Center, just a mile north of Palmetto Park Road.

The nature center started as a coastline preservation project in the 1970s and has since grown to include a sea turtle rescue, multiple outdoor aquariums, a boardwalk nature trail, the FAU research center (which guests can observe from an aerial walkway), a gift shop and a butterfly garden. Admission to the center is only a $5 recommended donation and every day at 1 p.m., a guided tour is given to guests to answer questions. 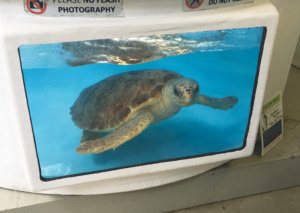 By far, the most memorable part of the Gumbo Limbo experience was seeing two massive loggerhead turtles that were rescued from Florida beaches. One was named Blitzen. He was a 127-pound, 20-year-old turtle rescued from Hutchinson Island in December. When rescuers found Blitzen stranded, he was emaciated, malnourished and covered in barnacles. He’s now on antibiotics and a healthy diet, and is expected to be freed this summer. The other loggerhead was named Holiday — a 102-pound male, around 15-20 years old, found at St. Lucie Power Plant. Holiday was found with a huge, longline fishing hook in his lower esophagus. It had to be surgically removed. Now Holiday has a scar on the underside of his neck, but is pretty lively. He was swimming in circles around the tank, slapping his fin along the side.

In addition to the large sea turtles, there were tons of baby green back turtles, a tortoise, sting rays, sand rays, lobsters, blow fish, lion fish, some fish with fluorescent blue eyes, and a whole slew of other marine life to watch. The coolest thing I find about going to a place like Gumbo Limbo is the sense of awe and wonder I experience as I get a small glimpse into a whole universe I’ve never been privy to, and realize how much unexplored magic there is under the ocean. It’s similar to that feeling I get as I peer up at the stars on a clear night, or admire a full moon as it rises above the horizon. I feel like just a minuscule part in a vast system, yet it’s strangely enchanting and invigorating.

Seeing all the creative manifestations of nature — all the vibrant colors and shapes and characters — makes me ponder the bigger questions in life, like “Where did all of it come from?” And yet, it makes me not really care at all, merely grateful it all exists. It brings out my inner child, makes life feel a little less dull and puts a few more things on my bucket list, like: get certified in scuba diving, travel to space and rescue some baby sea turtles. Until I have the opportunity to get in a rocket ship though, there’s always the rocket-booster-bicycle, a.k.a. the e-bike.

How Healthy Is Broward Health? 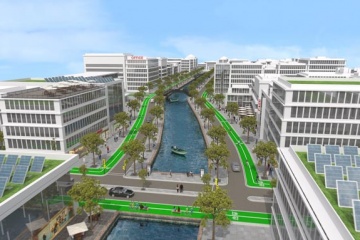