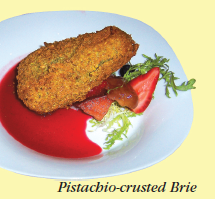 Sage, the charming French restaurant in Fort Lauderdale, embodies the “perfect package” of a restaurant for its excellent food, good value and attentive service. Unlike many highbrow French restaurants, where you leave hungry after an expensive meal, Sage serves delicious French comfort food with generous portions at reasonable prices. Chef Laurent Tasic, the owner and chef, studied at Le Cordon Bleu, the world-renown culinary institute in Paris and had owned restaurants in France, Monaco, and Martinique. In Martinique, he owned the famous “Le Fouyard” restaurant, where reservations had to be made at least thirty days in advance unless you were Michael Caine or Jackie O who were some of the celebrities that used to dine there. After four years of a very successful, high pressured, ultra-upscale restaurant business, Chef Tasic decided to open a casual, low-keyed restaurant— ergo, Sage Café and Restaurant was born in 1996.

Located on Federal Highway, just north of Whole Foods, Sage is a spacious 125-seat restaurant that has outdoor seating as well. Upon entering, you will find a large bar to your left and seating opposite it with framed mirrors hanging on the red brick wall. A black baby grand piano sits at the right corner where pianists randomly come in to play romantic standards. Behind the bar, the main dining area boasts a cream-colored wood ceiling accented by a large red trim where a miniature Eiffel tower sits. A chandelier hangs in the center, over a beautiful floral arrangement and black French doors line the street side, creating a bistro type of ambience. Toward the rear, a large mirror created by a checkered pattern of individual square mirrors give a reflection of the entire dining room.
Laurent Tasic, fashionably bald with piercing eyes spoke with a fabulous French accent. “Cooking was natural for me. You have to love what you do…to put things together. Food is chemistry, so you must find the right ingredients, the right dosage, the right balance.” Tasic originally studied architecture for four years but decided to change his career to pursue what he loved to do. He was raised by his grandmother who was a great cook. She used to make everything from scratch, even pastry. His mother also loved to cook from gnocchi, beef stews, stuffed peppers and cabbage.
Tasic apprenticed in several different restaurants in France before he received his degree from Cordon Bleu in six months (which normally takes about three years). He also did international consulting for restaurants in Russia, Cayman Islands, and Monte Carlo.
Two years ago he partnered with Chef Patrick and opened up Sage Bistro and Oyster Bar in Hollywood. And there are plans to open up a third restaurant.

Laurent ordered a glass of his favorite Pinot Noir for me that was an excellent pairing for the dishes that I was going to have. We first shared the Pistachiocrusted Brie appetizer ($10) that was absolutely divine! Warm and crispy on the outside, while soft and gooey on the inside! I will definitely be back for this appetizer. Then we shared the Escargot garlic butter francaise ($12)—one of my all time favorite French dishes. Their country-style bread had the real homemade taste as Jon would vouch for. Even a discerning bread lover such as Jon devoured the bread in no time. For the main course, we had their signature Roast Duck ($23), served with a honey raspberry sauce and mashed potatoes, as well as a pan seared Grouper ($26) over artichokes, asparagus, and turnips with roasted red pepper sauce. The duck was crispy, yet moist inside and the sauce complimented the poultry without overpowering it. Apparently, the two Sage restaurants sell more duck than any restaurant in the state of Florida. In the past year, the combination of the two restaurants sold 25,000 ducks! The grouper special was light and delicious and the portion for both dishes were huge, especially for
a French restaurant.
As usual, no matter how full we were, we always have room for desserts. Laurent ordered a Crème Brule aux fruit rouge ($6,) the biggest portion of crème brulee that I had ever seen, a Gateaux au chocolate avec framboise et crème ($6) that would make chocolate lovers very happy, and a Profiterols ($9), two large puff pastires, lightly toasted, stuffed with vanilla ice cream, covered with chocolate sauce and toasted almonds. All the desserts are homemade and they are large enough to share among several people. Not only were the desserts delightful, but Jessica, the dark-haired waitress with the beautiful French accent was kind and attentive. Her whole face lit up when she smiled, which made us feel that she genuinely enjoyed serving us.

Laurent explained to us that he believes in the basics, the simplicity of a dish and its flavors. “I like simple food, traditional, basic food. I always come back to real food the real coq au vin, the real duck. Cooking with fusion is very confusing. People try to re-invent food, the
wheel. All these new chefs, they’re very talented, but people want memory food.” It’s the food that he grew up with, the food that he used to smell in his grandmother and mother’s kitchen that has left a lasting and significant impression on his culinary orientation. And I must agree that there’s nothing better than enjoying the natural taste and flavor of a duck or fish as it is supposed to taste. I too believe in the simplicity of a cuisine. And here, at Sage, there’s something that works exceptionally well—the chef is the owner of the restaurant. This is the perfect combination for a successful restaurant—the “perfect package!” Sage is open everyday for lunch and dinner. Currently, there is a two for one lunch promotion from Monday through Saturday. On Monday and Tuesday evenings, there is a two-for-one dinner special. On Monday evenings, all the wines are half off. On Sundays, brunch is served from 11-3 pm with complimentary mimosa.

Fly Fishing in the Bolivian Amazon 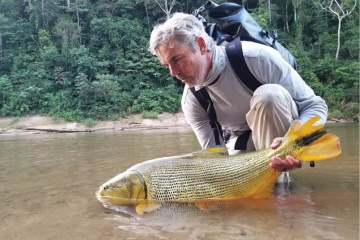