Croatia — Hiking along the Dalmatian Coast 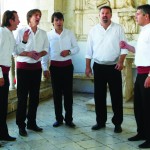 That same afternoon we boarded the Jadrolinija ferry for the island of Brac. This was our home for the next two nights in the picturesque Pastura Hotel built on the Adriatic Sea. Brac is famous for its beautiful white limestone. Our first hike took us to the village of Skrip founded in 1000 BC by the Illyrians. The citadel wall which was started by the Illyrians (irregular rectangle blocks) and finished by the Romans (perfectly squared corners) was interesting as were the very old rock houses with rock shingles in the village.  We visited the “konoba” (means cellar and/or kitchen) of a village home where the olive harvest in the form of oil is stored in large rock vats. Also stored in the konoba is the grape harvest in the form of wine fermenting in large stainless steel vats. We were offered homemade grappa and dried figs. This is very much a part of their culture. We were offered grappa and figs in most homes and restaurants we visited. We hiked to the outskirts of Skrip to a lovely home for a typical Brac lunch in the garden under the olive trees. Our lunch which consisted of homemade gnocchi with two sauces, tossed salad, red and white wine, bread and olive oil was all produced on their land. Everything tastes better when you are hungry, but I am convinced that the olive oil from the Dalmatian islands is the best ever.

As we hiked the trails of Brac, we found all my favorite herbs growing wild. Near our hotel, we noticed hedges made from Rosemary but we found it wild on the trail along with Oregano, thyme, sage, anise and bay leaves. There were wild free herbs everywhere. If you like to cook like I do, this was a gourmet’s fantasy land. 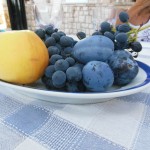 Our second day on Brac included a hike to a 16th century monastery built into the rock cliffs on the south side of the island. The priests who fled from the Ottoman invasion on the mainland founded the monastery and developed the surrounding lands which produced 8 tons of honey and 8000 liters of wine for export per year. The monks kept detailed records of their activities for centuries and these are preserved in a museum in the capital. We hiked down to a private cove (Picture 1569 one of many coves)where we were picked up by motorboat and delivered to town and waiting minibus. Our lunch today, again in a lovely “Home and Garden” setting at a Sheppard’s hamlet, consisted of “Peka” a local dish of lamb, chicken and vegetables roasted outdoors under ashes for 2 to 3 hours. With Peka we also had red and white wine, bread and olive oil.   Grappa & figs were offered before lunch as usual. After lunch we traveled by minibus to the highest point on the island where sheer cliffs overlook the beautiful Adriatic Sea. We could see a point of gravel and sand called the Golden Horn which changes shapes with the seasonal tides. Afterwards, we met our luggage at the dock and hopped a local boat to the Island of Hvar our home for the next two nights.

Hvar was built during Venetian rule (1278) to create a safe harbor for the important shipping to and from the orient. The city is built around this safe harbor and our hotel was one of the buildings.  We were on our own for dinner and met the next morning on our breakfast terrace overlooking the harbor. The Hvar harbor, while not big enough for cruise ships, was popular with private yachts.  Hvar, like most Dalmatian’s larger islands, has a high limestone peak. On Hvar’s peak just above the harbor was built the 16th century Spanjola fort. We hiked up to this fort for spectacular view of the harbor and surrounding area.  And then we were transported to the trailhead a short distance away and hiked down into another lovely cove by the name of Milna, where we changed into swimsuits for a welcomed cool swim in the crystal clear water of the Adriatic. Lunch at the Gostiona Milna Restaurant on the cove consisted of mussels, scampi, octopus salad and sea bass. All of which was prepared to perfection. Of course, there was plenty of bread and olive oil, red and white wine. The Milna cove experience rated among my favorites. After stuffing ourselves, only three of our party decided to walk the 5 miles back to our hotel, the rest of us opted to take the minibus.

The island of Hvar is known for its lavender fields. The next day we hiked through picturesque vineyards and lavender fields to a tiny coastal village known for its production of a red wine called Plavac. Their local white wine is called Posip. We stopped for lunch and wine tasting once again on a scenic cove in the town of Nedjelja. Our light lunch consisted of octopus salad, salted and marinated sardines and of course bread and olive oil. We met our minibus and luggage for a short ride to another maritime transport, this time to the island of Korcula.

This article of the journey through lovely Croatia will be continued in the February 2013 issue. 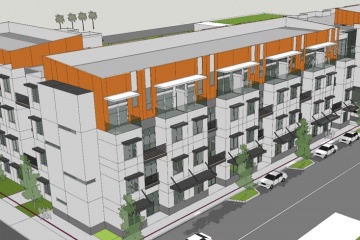