Lessons from "The Crown"

As a somewhat obsessed fan of “The Crown” on Netflix, I have come to focus on one small prop in the show: the queen’s button. It is the ultimate, sophisticated adult tool.

When Queen Elizabeth meets with a guest, there’s quite a bit of tradition and formality involved. For instance, guests may not sit until the queen is seated. There’s more to it than that, but as my chances of meeting the queen are slim, this is the only rule I have committed to memory. As her sessions draw to a close, the queen casually presses a button which rests on a side table. Within seconds two attendants appear to show the guest out of the palace.

OK. I want a button. A palace would be nice too.

More often than not, the button is employed in a very polite manner. Yet, there are times when the queen used the button for prompt and swift ejection of unwanted guests.

Hence, my longing for such a device. I don’t like confrontation. So, the option to simply eject anyone at any time is incredibly appealing.
Recently, I encountered another type of weird button at friends’ home in Washington, D.C. Their apartment building was constructed in 1917. As they were giving me a tour of their home, they pointed out a button in the dining room floor. In the past, the master of the house stepped on the button to summon the help from the kitchen. I have to admit, this little button also sounded suitable for a woman such as myself. I love to cook for my family, but cleaning up is another matter. Stepping on a magical discreet knob would solve that problem.

Sometimes I wish I had a myriad of buttons to vanquish life’s daily obstacles. Yet, if all it took to solve a dispute or to clean my house was the push of a button, well frankly, no problem would be solved and I would be somewhat sloth-like.

I recently read that the University of California, Berkeley, has a popular, student-taught course entitled “Adulting” which covers topics such as banking, time-management, and the importance of insurance. However, I’m sure they don’t advocate installation of buzzers such as the one the queen employs.
But perhaps some students have parents who — shall we say — take care of all the button pushing.

So I wonder, has it hurt or helped the queen that she can just rid herself of awkward or acrimonious situations? Obviously, the queen and I are not on a first name basis, but one could surmise, she would be a different person if she was forced to resolve more tense encounters. After all, she can’t use the button on her husband.
Naturally, there have been times in my own marriage when the presence of an ejector button could have come in handy. Buh Bye sweetie-pie! But in all seriousness, working though challenges with my husband Richard has made us a stronger couple. Or at least that’s what I like to tell myself.

As for my friend’s dining room button — obviously, they don’t use it (the corresponding bell in the kitchen has been removed), but if life was as easy as that, who would we be?

We’d be college students in need of basic life skills.

Certainly, there are times when if we could push a button to have our kitchen cleaned, it would be a small and welcome miracle. But maybe cleaning up after ourselves forces us to be a touch more responsible and appreciative? Maybe it gives us a certain appreciation for how much work goes into prepping, cooking and cleaning up after a meal. Listen, I’m not proposing we go back to cleaning our clothes on washboards by the river. Just be careful what you wish for. Let your kids empty the dishwasher. Or they might be forced to take a class on it in college. 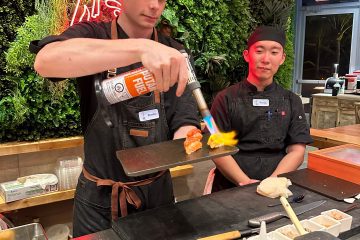