PORT EVERGLADES CRUISE SHIP: Holland America’s Zaandam appears to finally be making its turn into Port Everglades to disembark passengers that have been at sea for an entire month and have been refused entry to multiple ports across South America. Following closely behind the Zaandam is the Rotterdam, also a Holland America ship that was used last week to offload healthy passengers from the Zaandam.
The decision as to whether or not to let these cruise ships dock at Port Everglades has been rigorously debated over the last two days by the Broward County Comission and Unified Command Group, which includes the director of the port, coastguard commander, authorities at the CDC, the department of health, Broward County Sheriff’s office and fire rescue.
The Zaandam has been in the media spotlight for the past week as four passengers died aboard the ship, two of the four confirmed as coronavirus cases. Nearly 200 people reported flu-like symptoms, but most have since recovered. Fourteen passengers are still showing symptoms.
Local leaders feared the ships COVID-19 exposed passengers could put the county at risk and overcrowd hospitals already spread thin by the county’s more than 1,200 coronavirus cases.
The Broward County Commission agreed to a conditional plan this morning after a teleconference last night and a six hour meeting on March 31, but no final deal had been made as of noon today, according to Ellen Kennedy, the Assistant Division Director/Communications for Port Everglades. County Commissioner Lamar Fisher also confirmed at noon that no final plans had been signed off.
Given the conditional plan, Port Everglades did reserve berth space for both ships to dock this afternoon, the Zaandam at 1pm and the Rotterdam at 1:30pm. As of 2:30pm the Zaandam was circling about 15 miles off shore. As of 3pm, neither ship has entered the port. According to Vessel Finder, an app that tracks the movements of ships, the Zaandam is now about nine miles off shore moving straight toward the port at 16.5 knots.
Kennedy said she does not know what the hold-up was on finalizing and signing off of the deal, but based on the movements of the boat now in U.S. waters, the deal has most likely been finalized.
According to the conditional plan, healthy passengers would disembark. They would be bused directly to private flights to return to their home countries. The 311 Americans on board, including roughly 50 Floridians, would be required to do a mandatory 14-day quarantine.
Holland America said late Wednesday that is had arranged for a health service provider to treat ten patients in need of immediate attention on shore and a media representative for Broward Health Systems, Jennifer Smith, said that those critically ill would then be transferred to Broward Health hospitals. The exact details of the final plan, if it was altered after the conditional plan was passed, are not confirmed.
Media is standing by across from Port Everglades to document the long-awaited return of both the Zaandam and Rotterdam.
For more information regarding COVID-19, visit the Centers for Disease Control and Preventions (CDC) website.
For more Pompano Beach, Lighthouse Point and Deerfield Beach news including BROWARD COUNTY SHELTER-IN-PLACE GUIDELINES and Port Everglades Cruise Ship updates,  go to our website. 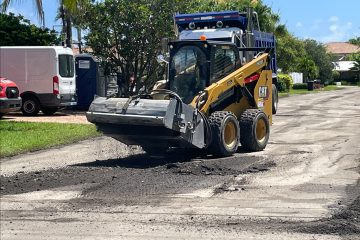