In an effort to generate non-property tax revenues to help fund its operations and programs, the City is considering selling naming rights and corporate sponsorships for a number of its assets.

In September, the City Commission approved in a 4-2 vote a contract with The Superlative Group, a national sponsorship analytics and sales firm specialized in working with local governments, to move forward with developing and negotiating sponsorship and naming rights contracts. In addition, the Commission approved a sponsorship policy that Superlative was hired last year to help write. The firm was also tasked with preparing a report that included an asset inventory with the estimated revenue each asset could generate.

“It’s an innovative area that we wanted to look into,” Suzette Sibble, assistant city manager, told the Commission.

Sibble said the objective is to ultimately reduce the tax burden on residents over time.

Naming rights opportunities were identified for the following venues, along with their potential annual revenues, which, when combined, amount to approximately $325,000 to $570,000 per year:

Along with facility signage, naming rights benefits could include the naming sponsor’s ID on light pole banners, employee uniforms and information kiosks.

In addition to naming rights, Superlative estimates that there is also a potential to generate revenue through category sponsorships, which could include “pouring rights” agreements at the identified city assets and their hosted events, whereby the manufacturer or bottler of a non-alcoholic beverage would be given exclusive permission to control beverage distribution.

Category sponsorships could also be agreements with companies in the areas of telecom, financial services, healthcare, automotive, sporting goods and energy. According to Superlative, $50,000 to $500,000 of revenue per year could be generated by each category sponsorship opportunity.

The Pompano Beach Amphitheater was not among the city assets considered for naming rights and other sponsorship opportunities because of an operating contract with AEG Presents.

If Superlative were to sell all the naming rights and sponsorship opportunities they’ve identified, the City could net $600,000 to $3.5 million per year.

Resident Tom Terwilliger told commissioners the City has spent multiple millions of dollars on building the name recognition of Pompano Beach. “Why do you want to throw it away for pennies? Please, protect the name of the city for the residents.”

Sibble said it has become more important over the last few years for the City to pursue alternative revenue sources because the Florida Legislature tries on a regular basis to erode some of the City’s local revenue sources. For example, a few years back, the Legislature tried to eliminate or reduce the amount of business tax receipts the City could assess. The City receives about $2 million in business tax receipts a year.

Superlative will be paid a $7,500 monthly retainer fee for up to 18 months, plus a $10,000 travel stipend. The Commission will have final approval of any proposed sponsorship contracts.

For any contracts that are approved, the firm will get a 15 percent commission.

“The question is,” said Sobel, “what kind of Pompano Beach do we want in the future? We’re going to permanently market city assets and dictate the products that the residents can consume while attending those assets.”

Sobel said the income that may be generated from it “is negligible, in my view, in terms of the imagery that we’re compromising and the type of city that we will become when we turn these city assets into brand names…It’s not my vision for Pompano Beach.”

“It’s not always about the money,” Sobel added. “This Commission is about to sell our Pompano Beach soul for a diet Pepsi.”

Mayor Lamar Fisher said: “I would not want the public to think that we are ‘selling our soul’ here. We have full control of this particular item, from now until we want to terminate or it’s successful.”

Vice Mayor Charlotte Burrie said that sponsorships are “a great source of income, but just how much City of Pompano Beach identity will we lose?”

Burrie also said she does not think Pompano has the type of buildings that would bring in the amount of money the City is looking for.

“Originally, I was against this,” said Commissioner Rex Hardin, “but I think we ought to go ahead and give ourselves the option. If we can look for outside revenue sources where we reduce the reliance on the taxpayer, that’s what we ought to be doing.”

Under its contract, Superlative is required to provide monthly progress reports which will be shared with the City Commission. If the firm does not perform adequately, or the City wants to go in a different direction, the City can terminate Superlative’s contract at any time with no penalty. 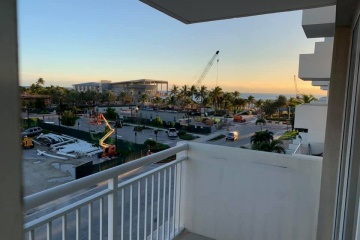