POMPANO BEACH REDEVELOPMENT: A rezoning application for a large-scale, development on property adjacent to Aquamarina Hidden Harbour was tabled by the Planning and Zoning Board last week because there are “some things to work out,” including height and density.

The 6.9-acre development site – located on the east side of Federal Highway, north of NE 14th Street Causeway, and south of NE 17th Street – is under the same ownership as Aquamarina Hidden Harbour, which currently includes a boatyard, dry boat storage building and a marina with boat slips.

The site plan for the project shows a ground-floor restaurant and bar with indoor and outdoor seating and a view down the Caliban Canal. There is also a 568-space parking garage, and a marine retail space and showroom. The dry boat storage building will remain, as well as boat slips for use by customers of the marina.

“The whole idea is to open that whole waterfront experience up to the public so that they can see it and walk along it,” Graham Penn, the land use and zoning attorney who represents the developer, told the Planning and Zoning Board.

A pedestrian bridge that is proposed to be built over NE 23rd Avenue, just south of NE 16th Street, would connect the two residential buildings on the project site starting at the third floor. The pedestrian bridge would allow residents to walk from the parking garage, which is in the building along Federal Highway, to their units on 16th Street, while remaining inside the building.

A ‘paseo’ is planned along Federal Highway, providing both access into the development as well as creating a view corridor from Federal Highway along the canal. A small lot on the north side of NE 16th Street is slated to become a park that will be part of the development, but open to the public.

Under a land use plan amendment for the property that was approved last year by the City Commission and the County, entitlements include up to 323 residential units and 510,000 square feet of commercial use.

A number of residents who live in the vicinity of the project have voiced their concerns about increased traffic and overcrowding. At last week’s Planning and Zoning Board meeting, during a public input period that lasted almost an hour, they referred to the project as “behemoth,” “massive” and a “9-story monstrosity.”

“I’m pro-building,” said one resident. “I love the way Pompano is moving forward. What I can’t see is this board approving this type zoning for this property. In my opinion, you’re zoning madness and traffic gridlock…Once again, it comes down to the density.”

A resident in favor of the project said it was “very well thought out,” and “I would welcome a project like this where I live.”

Fred Stacer, chairman of the Planning and Zoning Board, explained that the genesis of the Harborside at Hidden Harbour project was in 2013, when the City did a study of its major corridors – Federal Highway, Atlantic Boulevard and Dixie Highway – and created a transformation plan. The City envisioned mixed-use developments along the Federal Highway corridor, south of Copans Road. This was the precursor of the East Transit Oriented Corridor (ETOC), a new zoning district that went into effect last year and was designed to encourage mixed-use developments along Atlantic Boulevard, and parts of Federal Highway to the north and south.

“There’s no question that in the corridor study, and in the vision of the City, a mixed-use project in this area is appropriate,” said Stacer. “They have come up with a concept and there are some very good things.”

Stacer said creating walking space over the water was “a great idea.” He also liked the proposed pedestrian walkway around the buildings, and that the developer will make a commitment to use small local businesses to help build the project.

However, Stacer said there are certain things about the project “that very much concern me.”

For example, if the project is going to have a proposed 9-story parking garage, every northbound car on Federal Highway that passes it will see the upper 40 to 50 feet of the garage, he said.

“I want to make sure that this project, assuming that it does move forward, has an incredibly good-looking parking garage, as in I don’t want to know that it’s a parking garage,” said Stacer.

Stacer made reference to the Pier Parking Garage and how the City invested a million-and-a-half dollars’ worth of sails around its exterior, because “we were committed to it.”

“We want our developers to be just as committed to it,” he said. “When you come back for site plan approval, that garage better look like the pig that went to the Estée Lauder factory.”

Stacer said the height of the proposed 9-story building on Federal Highway needs to be “revisited.” He noted that the highest non-commercial building in the ETOC is eight stories.

Penn said the Federal Aviation Administration (FAA) still needs to make its determination regarding the height of the proposed buildings, which could be the controlling factor.

The project will require FAA approval in order to verify that the proposed structures won’t interfere with any of the approach surfaces to the runway at the nearby Pompano Beach Air Park.

Stacer also wants to see a “step-down process” in the building height. In “the perfect world,” half of the building on NE 16th Street would be 55 feet high, and then would vertically transition to 35 feet.

“We need to get something in-between what we’ve got and the perfect world,” said Stacer.

Regarding the pedestrian bridge, Stacer said he is not averse to it, but he is concerned about setting a precedent for something that is “not easy to back away from.” Other developers might want to construct longer pedestrian bridges that are more like “tunnels.”

“Overall, I would say that this is definitely a good project conceptually,” said Stacer. “I would like to see us take one more pass at it, give you guys a chance to come back to us, with taking into consideration some of the things you heard tonight.”

Penn asked for the rezoning application to be tabled until the Aug. 28 meeting of the Planning and Zoning Board, adding that an effort would be made to address “the concerns that we’ve heard from both the board and again from the neighborhood.”

Members of the Planning and Zoning Board shared their final thoughts before the 7:0 vote was taken.

“I think it’s a beautiful development and conceptually it’s fantastic, but it does feel shoe-horned for the size of the property that it’s being planned for,” said Anne Marie Groblewski.

“I would agree that it’s too dense for the site in listening to the concerns for the neighborhood, and I agree with your suggestion to do some step-down and potentially look at maybe even taking off a story on Federal Highway,” said Molly Moor.

“By having these proposed step-downs, that would also reduce the number of units, which was something that the community was not fond of, having such a high density,” said Richard Klosiewicz.

“I think ETOC is a wonderful experiment, and we’re just getting into to it, but we have to be people-oriented too,” said Jean Kovac. “We have to think about the people that are living close to these projects, and this has the feeling of just being too intense.”

Penn and the rest of the development team committed to submitting a revised plan to City staff in time for it to be placed on the agenda of the Aug. 28 meeting. 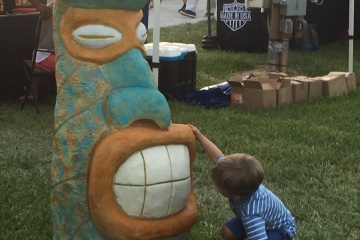